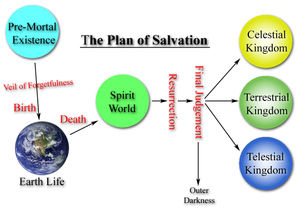 The Plan of Salvation, as illustrated by some within The Church of Jesus Christ of Latter-day Saints

In The Church of Jesus Christ of Latter-day Saints' theology, there are three degrees of glory (alternatively, kingdoms of glory) which are the ultimate, eternal dwelling place for nearly all who lived on earth after the Spirit world.

Joseph Smith, Jr. described the afterlife based primarily upon a vision he claimed to have received together with Sidney Rigdon, at Hiram, Ohio, February 16, 1832, and recorded as Doctrine and Covenants Section 76. According to this section of LDS scripture, the afterlife consists of three degrees or kingdoms of glory, called the Celestial Kingdom, the Terrestrial Kingdom, and the Telestial Kingdom. The few who do not inherit any degree of glory (though they are resurrected) reside in a state called outer darkness, which, though not a degree of glory, is often discussed in this context. The ones who go there are known as "Sons of Perdition".

A vision given to Joseph Smith the Prophet and Sidney Rigdon, at Hiram, Ohio, February 16, 1832. Prefacing his record of this vision the Prophet wrote: "Upon my return from Amherst conference, I resumed the translation of the Scriptures. From sundry revelations which had been received, it was apparent that many important points touching the salvation of man had been taken from the Bible, or lost before it was compiled. It appeared self-evident from what truths were left, that if God rewarded every one according to the deeds done in the body, the term 'Heaven,' as intended for the Saints' eternal home, must include more kingdoms than one. Accordingly, while translating St. John's Gospel, myself and Elder Rigdon saw the following vision." It was after the Prophet had translated John 5:29 that this vision was given.[1]

The LDS doctrine of the three degrees of glory is also seemingly consistent with a particular reading of Revelations 22:10-11, where John says (text in parenthesis added):

For other uses of "Celestial", see Celestial (disambiguation).

The celestial kingdom is the highest of three heavens or heavenly kingdoms. It is thought to be the "third heaven" referred to by the Apostle Paul in the King James Version of 2 Corinthians 12:2 and it is said by Latter-day Saints to correspond to the "celestial bodies" and "glory of the sun" mentioned in 1 Corinthians 15:40-41.

Joseph Smith taught that "a white stone is given to each of those who come into the celestial kingdom, whereon is a new name written, which no man knoweth save he that receiveth it."[7] This white stone will become a Urim and Thummim (or seer stone) to the recipient.[8]

Joseph Smith taught that the celestial kingdom itself is subdivided into three "heavens or degrees".[9] Only those individuals who are sealed in celestial marriage to a spouse in a temple while alive (or after death by proxy) will be permitted to enter into the highest degree of celestial kingdom.[10] These individuals will eventually become "exalted"[11] and will be permitted to live "the kind of life God lives" as literal gods and goddesses, as Doctrine and Covenants 132 explains.[12] The nature of the other two degrees within the Celestial Kingdom have not been described, except to say that the people who go there will become "ministering angels".[13]

In The Church of Jesus Christ of Latter-day Saints, the terrestrial kingdom is the middle of what are believed to be three heavens or heavenly kingdoms. It is said by Latter-day Saints to correspond to the "bodies terrestrial" and "glory of the moon" mentioned by the Apostle Paul in the King James Version translation of 1 Corinthians 15:40-41 15:40-41. The word terrestrial derives from a Latin word meaning "earthly".

According to the doctrine of The Church of Jesus Christ of Latter-day Saints, the terrestrial kingdom is the eternal destination in the afterlife to which some portion of humankind will be assigned following resurrection and the judgment day. The primary source of this doctrine is a vision recounted by Joseph Smith and Sidney Rigdon, at Hiram, Ohio, February 16, 1832, and recorded as Doctrine and Covenants Section 76.

According to Doctrine and Covenants section 76, those who will inhabit the terrestrial kingdom include those who lived respectably but "were blinded by the craftiness of men" and thus rejected the fullness of the gospel of Jesus Christ when it was presented to them during their mortal lives.[16] It also includes persons who rejected the "testimony of Jesus in the flesh, but afterwards received it" in the spirit world[17] and those who "are not valiant in the testimony of Jesus" after having received it.[18]

Ultimately, the kingdom of glory (either the celestial or the terrestrial) received by those who accept the testimony of Jesus will be based on God's knowledge of whether they "would have received it with all their hearts" as manifested by their works and the "desire of their hearts".[19]

Those who inherit the terrestrial kingdom "receive of the presence of the Son, but not the fulness of the Father."[20]

Joseph Smith taught that translated beings abide in the terrestrial kingdom until they are resurrected and enter the celestial kingdom.[21]

In The Church of Jesus Christ of Latter-day Saints, the telestial kingdom is the lowest of what are believed to be three heavens or heavenly kingdoms. It is said by Latter-day Saints to correspond to the "glory of the stars" mentioned by the Apostle Paul in the King James Version translation of 1 Corinthians 15:41. There are no known uses of the word prior to Joseph Smith's prophecies.

According to the LDS scripture, Doctrine and Covenants, Section 76, those who will inhabit the telestial kingdom include those "who received not the gospel of Christ, nor the testimony of Jesus."[22] It also includes "liars, and sorcerers, and adulterers, and whoremongers, and whosoever loves and makes a lie."[23] Because of their refusal to accept Jesus as their Savior, these individuals will remain in Spirit prison[24] for 1000 years during the millennial reign of Christ.[25] After the 1000 years, the individuals will be resurrected and receive an immortal physical body and be assigned to the telestial kingdom.[26]

Joseph Smith taught that individuals in the telestial kingdom will be servants of God, but "where God and Christ dwell they cannot come, worlds without end";[27] however, they will receive the ministration of the Holy Ghost and beings from the terrestrial kingdom.[28] Despite these limitations, in LDS theology being resident in the telestial kingdom is not an unpleasant experience: "the glory of the telestial ... surpasses all understanding".[29]

Smith and Rigdon stated "we saw the glory and the inhabitants of the telestial world, that they were as innumerable as the stars in the firmament of heaven, or as the sand upon the seashore".[32] One Latter-day Saint commentator has suggested that by implication this means that "most of the adult people who have lived from the day of Adam to the present time will go to the telestial kingdom."[33]

During the Endowment temple ordinance, members move between ordinance rooms. Due to cost of space, in most modern day LDS temples, moving between rooms has now been replaced with changes in lighting to represent change from one degree of glory to the next. In a few older Mormon temples (e.g. Salt Lake Temple and Manti Temple), the classic version of the endowment ceremony is still done by actors (instead of motion picture) and uses multiple rooms.

Some, including historian of Mormonism D. Michael Quinn in his book Early Mormonism and the Magic World View, have argued that various parts of the plan of salvation were influenced in part by Emanuel Swedenborg's book Heaven and Hell. In Heaven and Hell, Swedenborg wrote that "There are three heavens" that are "entirely distinct from each other."[34] Swedenborg called the highest heaven "the Celestial Kingdom," celestial being the Latin word for heavenly. He also stated that the inhabitants of the three heavens corresponded to the "sun, moon and stars."[34] While some historians believe Smith was familiar with Swedenborg's theology at least by 1839[citation needed], others have argued that he did not have access to the writings of Swedenborg.[35] One of Smith's preeminent biographers has argued it is more likely that Smith and Swedenborg developed their ideas independently based on 1 Corinthians 15.[36] This argument was more closely examined by William J. Hamblin as he explains that Quinn turned to Swedenborg as an indirect source, whose three heavens are not called "degrees of glory" and are themselves clearly derived from the Pauline passages in question. But Quinn insisted that Joseph was not influenced by the original idea from Paul (whom he certainly read), but rather by Swedenborg—whom Quinn agreed Joseph had not read, claiming instead that Joseph had heard of Swedenborg's ideas secondhand via Sibly (see pp. 217—18)[37]. But Sibly spoke of seven archangelic degrees of glory and not of three heavens as degrees of glory in the resurrection.[38]