The Oval
This article is about the cricket ground in London. For other uses, see Oval (disambiguation).
Not to be confused with Kensington Oval. 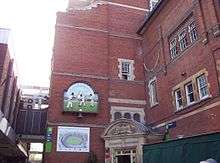 The clock outside the Members' Entrance.

The Kia Oval, still commonly referred to by its original name of The Oval, is an international cricket ground in Kennington, in the London Borough of Lambeth. In the past it was also sometimes called the Kennington Oval. In past years it was officially named as the 'Fosters Oval', 'AMP Oval', 'Brit Insurance Oval', and, presently, as the 'Kia Oval' due to commercial sponsorship deals.

The Oval is the home ground of Surrey County Cricket Club, and also traditionally hosts the final Test match of each English summer season in late August or early September. The Oval was the first ground in the United Kingdom and second in the world (after the Melbourne Cricket Ground) to host Test cricket.

The nearest Tube station is Oval, but Vauxhall is only half a mile away.

In 1844, Kennington Oval was a market garden. The Oval was then (and still is) owned by the Duchy of Cornwall. Surrey County Cricket Club was set up in 1845. The Duchy was willing to grant a lease of the land for the purpose of a cricket ground, and, on 10 March 1845, the club signed a lease with the Otter Trustees, who held the land from the Duchy of Cornwall, 'to convert it into a subscription cricket ground', for 31 years at a rent of £120 per annum plus taxes (£20 more). The original contract for turfing the Oval cost £300; 10,000 grass turfs came from Tooting Common.

Thanks to C. W. Alcock, the Secretary of Surrey from 1872 to 1907, the first ever Test match in England was played at the Oval in 1880 between England and Australia. The Oval thereby became the second ground to stage a Test, after the MCG. In 1882, Australia won the Ashes Test by seven runs within two days. The Sporting Times printed a mocking obituary notice for English cricket, which led to the creation of the Ashes trophy, which is still contested whenever England plays Australia. The first Test double century was scored at the Oval in 1884 by Australia's Billy Murdoch.

The current pavilion was completed in time for the 1898 season.[1] 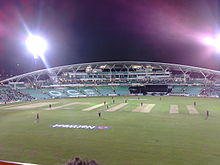 The Brit Oval under lights

During the Second World War, the Oval was intended for use as a prisoner of war camp, although it was never employed as such. The Oval is referenced by the poet Philip Larkin in his poem about the First World War, "MCMXIV".[2]

The first One Day International match at this venue was played on 7 September 1973 between England and West Indies. It had the privilege of hosting matches of the 1975, 1979, 1983 and 1999 World Cups. It also hosted five of the fifteen matches in the 2004 ICC Champions Trophy, including the final. No floodlit day/night international match has been played here to date, although Surrey have played several floodlit one-day matches. In fact, Surrey's ground is noted as having the first floodlights at a sport arena in the form of gas-lamps dating back to 1889.[3]

The ground also had a Zeppelin and later a hot air balloon employed for aerial views during tests but this was never commercially viable and was gone by the turn of the millennium. Several other British grounds had this feature also such as Edgbaston. The Oval once held the record for the largest playing area of any Test venue in the world, but that record has since been surpassed by Gaddafi Stadium in Pakistan (though it is still the largest in Britain).

The billionaire Paul Getty, who had a great affinity for cricket and was at one time Surrey CCC President built a replica of the Oval on his Wormsley Park estate.[4] The famous gasholders at the Oval are actually newer than the ground by several years, having been built circa 1853. There has been much speculation of late as to whether they should be demolished; however, many believe they are part of the Oval's landscape and therefore their future looks secure.

The names of the ends are the Pavilion End and the Vauxhall End. 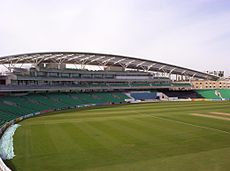 The OCS Stand as pictured from the Bedser Stand 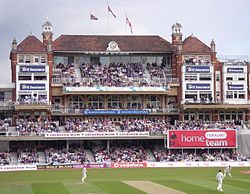 At the end of the 2002 cricket season, Surrey started redeveloping the Vauxhall End. The development included knocking down the outdated Surridge, Fender, Jardine and Peter May north stands and creating in their place a single four tier grandstand known as the OCS Stand. This work was completed in May 2005, increasing ground capacity to around 23,000.

In January 2007, Surrey announced plans to increase capacity by a further 2,000 seats, this time by redeveloping the Pavilion End. The Lock, Laker and Peter May south stands will be replaced with a new stand, which will have a hotel backing on to it. The Surrey Tavern at the entrance to the ground will be demolished and a new pedestrian plaza will be created in its place, improving access to the ground and opening up views of the historic pavilion. These plans were delayed by objections raised by the Health & Safety Executive as the ground is close to a gasometer. Planning permission was eventually granted, but not before the credit crunch struck. As of November 2010, Surrey still plans to proceed with the development when its hotel partner can obtain funding.[5]

In 2009, permanent floodlights were installed for use in day/night matches. The floodlights are telescopic and can be retracted when not in use.

The Oval was also an important site in the historical development of football, before the game had its own separate national stadium. Football had been played in this part of London for many years prior to the inauguration of the Oval: "The Gymnastic Society" – arguably the world's first Football club – met regularly at Kennington Common during the second half of the eighteenth century to play football[6]

The Oval was home to the first ever international football match on the March 5, 1870, England against Scotland, organised by the Football Association[7][8] The game resulted in a 1–1 draw. Similar international matches between England and Scotland took place at the Oval in 1871, in February 1872 and 1873. On 8 March 1873, the England national team beat Scotland 4–2. England would continue to play occasionally at the Oval until 1889.

An illustration of an 1872 England vs Scotland match. The background shows the distinctive gas holder of The Oval

On 16 March 1872, The Wanderers beat the Royal Engineers 1–0 to win the first ever FA Cup. This final was notable for the Engineers' modern footballing style of teamwork rather than individual play.[9] C. W. Alcock, Secretary of the Football Association, was the prime mover of the competition. He had just become Secretary of Surrey, so that The Oval was the natural choice of venue for the final. Alcock also captained the successful Wanderers side. The Oval hosted all subsequent FA Cup finals (1873 excluded) up until 1892.

The Oval is one of two grounds (Bramall Lane in Sheffield being the other) to have staged both England Football and Cricket internationals, and also FA Cup Finals. The Oval also hosted the second ever Rugby Union international between England and Scotland in 1872 (the first was hosted at Raeburn Place a year earlier).

Results of FA Cup finals at the Oval

Between 1872 and 1879, the Oval held 7 full cap international rugby union matches, as follows:

On Wednesday 3 March 1875, the Oval held the final of the United Hospitals Challenge Cup, the oldest rugby union cup competition in the world.

The ground has hosted many other events, including hockey fixtures, as well as concerts.

In October 2011 the grounds served as the practice facility for the NFL's Chicago Bears. The Bears were in London to play a match against the Tampa Bay Buccaneers at Wembley Stadium.