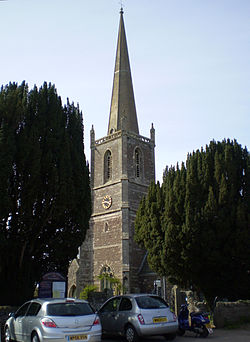 The Civil Parish of Winterbourne or Winterbourne Parish is located in South Gloucestershire, on the outskirts of Bristol, England. It comprises four communities, three of which act as ecclesiastical parishes within the overarching Civil Parish: Winterbourne, Winterbourne Down, Hambrook, and Frenchay. Given the Parish's location, each of its villages/towns are fairly modern and busy, feeding traffic onto the M4 and the M32 motorways and thus Bristol and Cribbs Causeway etc. They do however still exhibit many of the traditions expected of a typical English Parish.

Inventor, Harry Grindell Matthews, was born in Winterbourne in 1880. His childhood home was located at what is now The Grove Residential Home for the Elderly on the High Street where a blue plaque commemorating this link was recently unveiled.

J.K. Rowling, author of the Harry Potter books, lived in Winterbourne and attended St Michael's Primary School until she was nine years old.[1] Potter's surname originated from some of her friends in the village.[2]