Louis Germain David de Funès de Galarza (French pronunciation: [lwi də fynɛs]; 31 July 1914 – 27 January 1983) was a very popular French actor who is one of the giants of French comedy alongside André Bourvil and Fernandel. His acting style is remembered for its high energy performance, a wide range of facial expressions and an engaging, snappy impatience.

He was enormously successful in several countries for many years, but remained almost unknown in the English-speaking world. He was only noted in the United States in 1974 with the release of The Mad Adventures of Rabbi Jacob. In a 1968 poll, he was voted France's favourite actor. In a personal statement, he claimed to be interested only in films that would draw an audience of at least 500,000.

Louis de Funès was born in Courbevoie, Hauts-de-Seine to parents from Seville, Spain. His father, Carlos Luis de Funès de Galarza had been a lawyer in Spain, but became a diamond cutter upon arriving in France. His mother, Leonor Soto Reguera was of Spanish and Portuguese extraction. Since the couple's families opposed their marriage,they settled in France in 1904.

Known to friends and intimates as "Fufu", de Funès spoke French, Spanish and English well. As a youth, he was fond of drawing and piano playing. He was an alumnus of the lycée Condorcet in Paris, a distinction he shared with Henri de Toulouse-Lautrec, Paul Valéry, Paul Verlaine, Marcel Proust, Jean Cocteau, Serge Gainsbourg, and Claude Lévi-Strauss amongst others. He later dropped out, and was not successful in his early life; as a youth and young adult, de Funès held modest jobs, from which he was repeatedly fired. He became a pianist, working mostly as a jazz pianist at Pigalle, famous for being a touristic red-light district. There he made his customers laugh each time he made a grimace. He studied acting for one year at the Simon acting school. There he made some useful contacts, including Daniel Gélin among others. In 1936, he married Germaine Louise Elodie Carroyer with whom he had one child, a son named Daniel; they were subsequently divorced in late 1942.

During the occupation of Paris in the Second World War, he continued his piano studies at a music school, where he fell in love with a secretary, Jeanne Barthelémy de Maupassant, a grandniece of the famous author Guy de Maupassant. She had fallen in love with "the young man who played jazz like god"; they married in 1943 and remained together for forty years, until de Funès' death in 1983. They had two sons: Patrick (born on January 27, 1944) and Olivier (born on August 11, 1947). Patrick became a doctor who now practices in Saint-Germain en Laye. Olivier became an actor for a brief while. He became known for the roles he had in his father's films (Les Grandes Vacances, Fantômas se déchaine, Oscar, Le Grand Restaurant, Hibernatus are the most famous). He is now an aviator for Air France Europe.

Through the early 40's, Funès continued playing piano at clubs, thinking there wasn't much call for a short, balding, skinny actor. His wife and Daniel Gelin encouraged him until he managed to overcome his fear of rejection. His wife supported him in the most difficult moments, while helping him to efficiently manage his career.

De Funès began his show business career in the theatre, where he enjoyed moderate success. He pursued a theatrical career while playing smallish roles in films. Even after he attained the status of movie star, he continued to play theatre. His stage career culminated in a magnificent performance in the play Oscar (a role which he would reprise a few years later in the film version).

In 1945, thanks to his contact with Daniel Gélin, he made his film debut at the age of 31 with a bit part in Jean Stelli's La Tentation de Barbizon ("The Temptation of Barbizon").[1] De Funès appeared on screen for 40 seconds in the role of the porter of the cabaret Le Paradis. De Funès accepts the character of Jérôme Chambon at the entrance of the cabaret and invites him to enter inside by "C'est par ici Monsieur" ("Mister, here please"). Chambon declines the invitation, wanting to try to enter through the front door of the room instead, but the door is closed. De Funès then says: "Ben, il a son compte celui-là, aujourd'hui" ("He's had enough today, that one").[2]

He went on to perform in 130 film roles over the next 20 years. However, he played minor roles in over 80 films before he got his first leading roles. During this period, De Funès developed a pattern of daily activities: in the morning he did dubbing for recognized artists such as Totò, an Italian comic from this era, during the afternoon he worked in film, and in the theater in the evening.

From 1945-1955 he appeared in 50 films, usually as an extra or walk-on. A break came in 1956, when he appeared as the black-market pork butcher Jambier (another small role) in Claude Autant-Lara's well-known film World War II comedy, La Traversée de Paris. He achieved stardom in 1963 with Jean Girault's film, Pouic-Pouic. This success film guaranteed de Funès top billing in all of his subsequent films. At the age of 49, De Funès unexpectedly became a major star of international celebrity with the success of Le gendarme de Saint-Tropez. After their first successful collaboration, director Jean Girault had perceived de Funès as the ideal actor to play the part of the accident prone gendarme. The first film lead to a series of six 'Gendarme' films.

Funès's collaboration with director Gerard Oury produced a memorable tandem of Funès with Bourvil, another great comic actor, in the 1964 film, Le Corniaud. The success de Funès-Bourvil partnership was repeated two years later in La Grande Vadrouille, one of the most successful and the largest grossing film ever made in France, drawing an audience of 17,27 million. It remains his greatest success.[3] Oury envisaged a further reunion of the two comics in his film La Folie des grandeurs, but Bourvil's death in 1970 led to the unlikely pairing of de Funès with Yves Montand in this film.

Eventually he became France's leading comedian. Between 1964 and 1979, he topped France's box-office of the year's most successful movies seven times. His most popular movie ever was La Grande Vadrouille (1966). He went on to star in such films as Ah! Les belles bacchantes and The Sheep Has Five Legs. He co-starred with many of the major French actors of his time, including Jean Marais and Mylène Demongeot in the Fantomas trilogy, and also Jean Gabin, Fernandel, Coluche, Annie Girardot, and Yves Montand. He also worked with Jean Girault in the famous 'Gendarmes' series. In a departure from the Gendarme image, Funès collaborated with Claude Zidi, who wrote for him a new character full of nuances and frankness in L'aile ou la cuisse (1976), which is arguably the best of his roles. Later De Funès' considerable musical abilities were showcased in films such as Le Corniaud and Le Grand Restaurant. In 1964 he debuted in the first of the Fantômas series, which launched him into superstardom.

In 1975, de Funès was hospitalized for heart problems and forced to take a rest from acting. After his recovery, he appeared opposite another comic genius, Coluche, in L'Aile ou la cuisse. In 1980, de Funès realised a long-standing dream to make a film version of Molière's play, L'Avare.

Unlike the characters he played, de Funès was said to be a very shy person in real life. Capable of an extremely rich and rapidly changing range of facial expressiveness, de Funès was nicknamed "the man with forty faces per minute". In many of his films, he played the role of a humorously excitable, cranky, middle-aged or mature man with a propensity to hyperactivity, bad faith, and uncontrolled fits of anger. Along with his short height, (he measured 5 ft 4 in (1.63 m)) and his facial contortions, this hyperactivity produced a highly comic effect. This was particularly visible when he was paired with Bourvil, who was always given roles of calm, slightly naive, good-humoured men. In de Funès' successful lead role in a cinematic version of Molière's The Miser (L'Avare), these characteristics are greatly muted, percolating just beneath the surface.

In the later part of his life, De Funès achieved great prosperity and success. He became a knight of France's Légion d'honneur in 1973. He resided in the Château de Clermont, a 17th-century monument, located in the commune of Le Cellier, which is situated 27 kilometers (17 mi) from Nantes in France. This castle, overlooking the Loire River, was inherited by his wife, a descendant of the Maupassant family. De Funès was an aficionado of roses. He planted a rose garden on the château grounds and a variety of rose has been named for him (the Louis de Funès rose). A monument honoring him was erected in the rose garden of his wife's castle.

In his later years, he suffered from a heart condition after having suffered a heart attack caused by straining himself too much with his stage antics. Louis de Funès died of a massive stroke on 27 January 1983, a few months after making his final film. He was laid to rest in the Cimetière du Cellier, the cemetery situated in the grounds of the château. 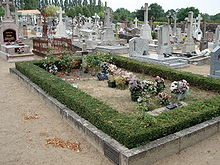 The tomb of Louis de Funès

One of his sons, Olivier de Funès, pursued an acting career alongside him (often playing the son of Louis's character) before becoming an Air France pilot. Another son, Patric de Funès, became a medical doctor.

Louis de Funès is portrayed on a postage stamp issued on October 3, 1998 by the French Post Office. He is the uncle of actress Isabelle De Funès. He was portrayed as a gambler in the "The One-Armed Bandit" issue of the cult comic book series Lucky Luke. The character "Skinner" in Ratatouille (2007) was loosely based on him.