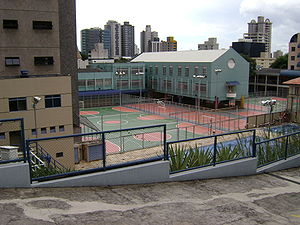 A sport club in Belo Horizonte, Brazil, showing various paved and painted surfaces for futsal, basketball and volleyball, with two swimming pools in the foreground.

A sports club or sport club, sometimes athletics club or sports association is a club for the purpose of playing one or more sports. Sports clubs range from organisations whose members play together, unpaid, and may play other similar clubs on occasion, watched mostly by family and friends, to large commercial organisations with professional players which have teams which regularly compete against those of other clubs and attract sometimes very large crowds of paying spectators. Clubs may be dedicated to a single sport, or to several (multi-sport club).

The term athletics club is sometimes used for a general sports club, rather than one dedicated to athletics proper.

Larger sports clubs are characterized by having professional and amateur departments in various sports such as football (soccer), basketball, futsal, cricket, volleyball, handball, rink hockey, water polo, rugby, track and field athletics, boxing, baseball, cycling, tennis, rowing, gymnastics and others, including less traditional sports such as airsoft, billiards, orientering, paintball or roller derby. The teams and athletes belonging to a sports club may compete in several different leagues, championships and tournaments wearing the same club colors and using the same club name, sharing also the same club fan base, supporters and facilities. Many sports clubs have an associate system where the affiliated supporters pay an annuity fee. In those cases, the supporter becomes eligible to attend the club's home matches and exhibitions across the entire season, and have the right to practice almost every kind of sport at the club's facilities. Registered associate member fees, attendance receipts, sponsoring contracts, team merchandising, TV rights, and athlete/player transfer fees, are usually the primary sources of sports club financing. In addition, there are sports clubs, or its teams, which are publicly traded and listed on a stock exchange - several professional European football clubs belonging to a larger multistports club are examples of this.

Sports clubs around the World

In many regions of the world like Europe, North Africa, Middle East, Indian subcontinent or Latin America, sports clubs with several sports departments (multisports clubs) or branches, including highly competitive professional teams, are very popular and have developed into some of the most powerful and representative sports institutions in those places. In general, student sports can be described as composed by multisports clubs, each one representing its educational institution and competing in several sport disciplines.

In the United States of America major institutions like The New York Athletic Club, Los Angeles Athletic Club or many university athletic programs such as the California Golden Bears, Stanford Cardinal and Texas Longhorns are good examples of a sports club (see list of College Athletic Programs by US State). However, examples abound of sports clubs that are in effect one sports team. Each team from the NBA (basketball), NFL (American football) or MLS (association football) American sports leagues, can be called sports clubs, but in practice, they focus solely on a single sport. On the other hand, American varsity teams are generally organized into a structure forming a true multi-sport club belonging to an educational institution.

In the United Kingdom, almost all major sports organizations are dedicated to a single sport, with a few minor multisport clubs such as Catford Wanderers. In addition, like in several other countries, many universities and colleges develop a wide range of student sport activities including at a professional or semi-professional level. Fulham F.C. once ran a professional rugby league team and rowing club, which other football clubs have emulated since. Many football clubs originate from cricket teams. Today, most major cities have separate clubs for each sport (e.g. Manchester United football club and Lancashire County Cricket Club are based in Manchester).