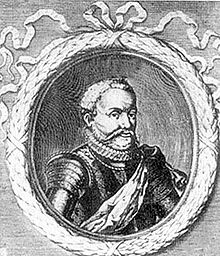 A notable public figure in his time, Villegaignon was a mixture of soldier, scientist, explorer, adventurer and entrepreneur. He fought pirates in the Mediterranean and participated in several wars.

Villegagnon was a nephew of Philippe Villiers de L'Isle-Adam, Grand Master of the Order of Malta.[2] He was ordained as a Knight of the Order in 1521.

Ottoman campaigns in the Mediterranean

In 1548, he commanded the French naval fleet that took Mary, Queen of Scots, then five years old, to France, since she was promised to marry the Dauphin of France. This was a daring operation, covertly sailing galleys around Scotland, while the English fleet was expecting an attack from the other direction.

Villegagnon helped repel the Ottomans at Malta in 1551, before they went on to lead the Invasion of Gozo (1551).[1] He was then present at the Siege of Tripoli (1551) against the Ottoman Empire, and wrote an account about it in 1553.[3][4] Villegagnon illustrated himself by courageously defending Gaspard de Vallier, the vanquished Commander of Tripoli, who was being heavily criticized by the Grand Master D'Omedes who wished to assign all the blame for the defeat on him. Nicolas de Villegagnon staunchly defended him and exposed the duplicity of D'Omedes.[5]

Drawing of the Island of Villegaignon, in Rio de Janeiro

Villegaignon became an important historical figure in the attempt for king Henry II to build a "France Antarctique", by invading present-day Rio de Janeiro, Brazil in 1555 with a fleet of two ships and 600 soldiers and colonists, mainly French Huguenots and Swiss Calvinists who sought to escape Catholic persecution in Europe.

Villegagnon's initial plan was to help the Huguenots establish a colony in the New World. He wanted also to secure a permanent base in Brazil in order to explore brazil wood, then a very valuable source of red dye and hard wood for construction (which gave the name to what was to become Brazil), and to explore precious metals and stones, which the Europeans believed to exist in abundance in the land.

After a number of battles against the Portuguese, the French colonists were defeated by Estácio de Sá, a nephew of the third Portuguese Governor-General of Brazil, Mem de Sá, on 15–16 March 1558.

Villegaignon had already returned to France, in 1559, disgusted with the infighting between Catholics and Protestants in the small colony. He had left the colony under the command of his nephew Bois-le-Comte, endeavouring to obtain more funds and ships for the colony.[6] The internal fight against the Calvinists however made colonial adventures less of a priority for the Crown. After the colony fell to the Portuguese, Villegagnon finally agreed to give up his claims to France Antarctique after receiving 30,000 écus from the Portuguese Crown.

Fight against the Protestants

In 1560, Villegagnon challenged Calvin to a theological debate on the eucharist, which the latter declined. He became actively involved against the Protestants, and participated in the repression of the Amboise conspiracy.[6]

Villegagnon participated in the repression of the Amboise conspiracy in 1560.

New attempts were made to create a Huguenot colony in the New World, again at the instigation of Coligny, this time in Florida from 1562 to 1565, under Jean Ribault and René de Laudonnière.

From 1568, Villegagnon became the representative of the Order of Malta at the French Court. The next year, in 1569, he published in Paris a new controversy about the eucharist, entitled "De Consecratione, mystico sacrificio et duplici Christi oblatione".

Villegagnon became Commander of the Order of Malta Commandery in Beauvais, where he died on 9 January 1571.

The Catholic André Thévet, who had accompanied him on the first trip to Brazil, published in 1572 a description of the Brazil adventure and an attack on the Protestants, in his "Cosmographie Universelle". The Protestant Jean Léry would respond to it in 1578 with his "Histoire d'un voyage faict en la terre du Brésil".

In his book, Brazil, A Land of the Future, Austrian writer Stefan Zweig describes the colorful character of Villegaignon: