She's Out of Control

She's Out of Control

Infobox_Film
name = She's Out of Control 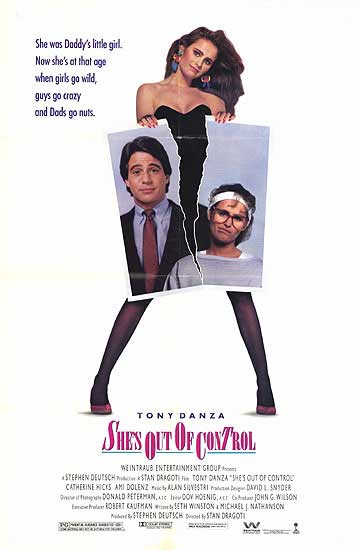 "She's Out Of Control" is an independent American 1989 starring , , and . The original music score was composed by . The film was marketed with the tagline "Girls go wild, boys go crazy, and dads go nuts!"

Widower Doug Simpson (Danza) is a radio station producer from who lives with his two daughters, Katie (Dolenz) and Bonnie (Laura Mooney). When his oldest daughter (Katie) turns 15, she suggests to her father that's it's time for her to start looking more grown-up. For the last 14 years, Katie had been wearing dowdy clothes, braces, and thick glasses and hanging around with Richard, her next-door neighbor and long-time boyfriend (who had won Doug's approval); but when Doug leaves on a business trip, Katie transforms herself, along with the help of Doug's fiancée Janet Pearson (Hicks), into a knockout beauty.

When Doug returns, he is shocked to find boys from every walk of life interested in dating Katie. Janet suggests that Doug needs psychiatric help when his obsession with Katie and her boyfriends reaches extreme limits. Throughout the latter half of the movie, Katie maintains three boyfriends, two of whom she eventually stops dating. At the end of the movie, Katie takes a class trip to Europe and reunites with Richard again — at which point Bonnie, her younger sister, begins her own dating spree.

The soundtrack, distributed by in April 1989, was released on , , and . The track listing includes: