High Street
This article is about the generic term for the main business streets in British towns. For roads of the same name and other uses, see High Street (disambiguation). 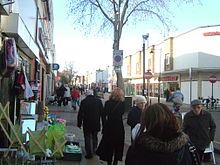 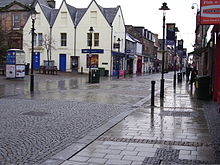 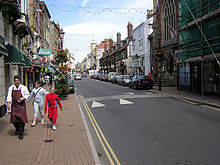 High Street, or the High Street, is a metonym for the generic name (and frequently the official name) of the primary business street of towns or cities, especially in the United Kingdom. It is usually a focal point for shops and retailers in city centres, and is most often used in reference to retailing. However in recent times, the phrase "high street banks" has been widely used to refer to the retail banking sector in the United Kingdom.[1]

The equivalent in the United States, Canada, and Ireland is Main Street, a term also used in smaller towns and villages in Scotland and parts of rural Australia. In Jamaica, North East England, and some sections of Canada and the United States, the usual term is Front Street. In Cornwall and some places in Devon, the equivalent is Fore Street; in some parts of the UK Market Street can also be used, though sometimes this can actually be a differing area in some towns where street markets are currently or historically centred. In Canada King Street and Queen Street are often used instead of Main Street, which is more predominant in the United States. The Dutch equivalent is Hoogstraat, of which examples are found in cities like Brussels, Amsterdam, Antwerp, Bruges, Rotterdam and many other towns.

High Street is the most common street name in the UK. According to a survey by the bank Halifax, there are 5,410 High Streets, compared to 3,811 Station Roads, and 2,702 Main Streets[citation needed].

In more recent times, especially with the introduction and growth of the Internet, High Street may also be interchangeable with the term "bricks and mortar business" in the United Kingdom (note the spelling with the "s", comparable to the United States term "brick and mortar"), referring to the material used in the construction of a retail shopfront operation versus an online Internet operation.[2]

Starting at least 10 centuries ago, the word 'high' gradually evolved to also mean something excellent or of superior rank, as evidenced in high sheriff and high society. It was applied to roads as they improved, and the word highway has been recorded from the early 9th century. "High Street" began to be used to describe the thoroughfares containing the main retail areas in villages and towns.

In recent years, although the term "High Street" is still used to refer to commerce, shopping has begun to shift to purpose-built out-of-town shopping centres and supermarkets. However compared to the United States town and city centre shopping remains widespread. The town centre of many larger British towns combines a group of outdoor shopping streets, one or more of which may be pedestrianised, with an adjacent indoor shopping centre. The large presence of chain stores on High Streets repeated in settlements around the UK is part of the clone town theory, which has among its concerns the loss of "sociability" offered by traditional shopping: "the demise of the small shop would mean that people will not just be disadvantaged in their role as consumers but also as members of communities – the erosion of small shops is viewed as the erosion of the 'social glue' that binds communities together, entrenching social exclusion in the UK."[3]

The term is far less common in Ireland. Neither of Dublin's two main shopping streets (Grafton Street and Henry Street) carry this name, nor does its main thoroughfare, O'Connell Street. While Dublin does indeed have a street named "High Street", near Christchurch, it is not a shopping street. Cork's main shopping street is St. Patrick's Street and Limerick's is also O'Connell Street, which is also used in a number of other Irish towns (after Daniel O'Connell). Main Street is used in many smaller towns and villages. For example, the OSI North Leinster Town Maps book lists 16 Main Streets and only two High Streets in its index of street names (of 30 towns). Similarly, the OSI Dublin Street Guide, covering all of Dublin City and County Dublin, lists 20 Main Streets, but only two High Streets. Killarney and Galway are two of the few large Irish towns in which the shopping street is named High Street. Nonetheless, the term high street is still often used today in the Irish media in a generic sense to refer to shopping streets, in what could probably be considered as a misapplied metonym (see start of article). See also Main Street and its Irish entry.

The term "High Street" is often used to describe common stores found on a typical high street, to differentiate them from more specialist, sometimes more exclusive/expensive, less common outlets. Furthermore, these may be independent, non-chain stores. For example, someone might refer to "High Street banks" (as opposed to the less common private or investment banks) or "High Street shops" (as opposed to more exclusive and/or expensive boutique shops).