From Elvis in Memphis

From Elvis in Memphis 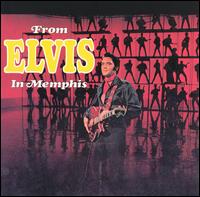 "From Elvis in Memphis" is the thirty-fourth album, not counting budget compilations on the subsidiary, by , released on , LSP 4155, in June 1969. Recorded at in Memphis, it peaked at #13 on the , and is considered by many critics to be his best album.Fact|date=February 2007 RS500|190

After the success of his television special the previous year, Presley decided to regain active control over the direction of his career. He had grown tired of the grind in making approximately three films a year, all successful, but of the type which have come to be known as "Elvis movies." The informal jam session during the special, with old bandmates and , had proven that Presley could reconnect with the elements of his music that had made him popular in the first place, seemingly lost in the fog of the sixties soundtrack albums.

He couldn't return to the 1950s, but a solution lay close by to his home at . He hadn't recorded in Memphis in the thirteen years since he had left : in the interim, Memphis had become a thriving center for soul music, with , , and American Sound Studios in the city, and in nearby . A veritable who's who of soul and popular singing stars either regularly recorded at these locations, or had made the pilgrimage at one time.

Presley chose American, started by songwriter and session guitarist , who had assembled a group of house well-versed in the same kinds of music familiar to Presley: , gospel, country, and soul. This album by Presley would be one of American Studios' most famous products; coincidentally, the other candidate for the studio's most renowned artifact, "", was released on , 1969, right at the beginning of the sessions with Presley.

Many of the songs recorded at American by Presley derived from the repertoire, such as the 1962 hit "" by , Hank Snow's #1 country smash in 1950, "I'm Movin' On," and Eddy Arnold's 1947 chestnut, "." Even the more modern, late sixties country approach in "" found a place. By including these songs, along with contemporary soul such as Jerry Butler's recent "," like earlier in the decade with "", Presley reinforced the musical links between country and .

had sung the original version of "Any Day Now" by in 1962, and future country singer and 1970s television star provided "," Presley's stab at a message or aligned with the times. Released as the lead single on , two months before the album hit the stores, it went to #3 on the singles chart, and provided another break with his public image as cultivated by the escapist fare of his sixties film career.

The reissue of , , includes six tracks released as either A or b sides recorded at the same sessions for the album. "," also by Davis, and "" were both sizeable hits in 1970, but "" became one of Presley's signature tunes, and gave him the final chart-topper of his career as the decade came to a close.