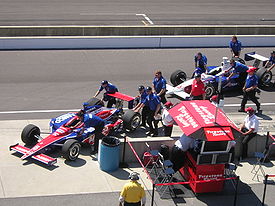 Founded in 2000, D&R was one of the few teams that consistently ran the Infiniti engine until they left the series, then switched to Chevrolet and finally to Honda in 2005. When Buhl retired from the cockpit in 2004, he placed Felipe Giaffone in the cockpit, followed by Roger Yasukawa with financial backing from Honda. With Honda backing gone for 2006, some doubted if the team would continue, as Buhl had consistently stated that if running the team did not make financial sense, he would shut it down. However, sponsorship was found and the team named 2000 series champion Buddy Lazier their primary driver. During the team's heyday in 2001 and 2002, the team often also ran a second car for Sarah Fisher. In the 2006 Indianapolis 500, the team's second car was driven by Al Unser, Jr..

The team's only win came in the 2000 season opener at Walt Disney World Speedway, when Buhl stunned the establishment with a win from the 22nd starting position. In 2006 the team scored their best finish in years when Ryan Briscoe showed a great turn of speed in the wet at Watkins Glen International to get on the podium. Other good results in the season were few and far between.

For 2007 the team has recruited two ex-Fernandez Racing engineers and added a new sponsor. On January 31, 2007, 2004 Indianapolis 500 winner Buddy Rice and Sarah Fisher would drive for the team. Rice brought in respectable performances, finishing 9th in points with three top-five finishes. Fisher struggled to 17th place in points after playing second fiddle to the "A Team" oftentimes being given less than par equipment. Fisher announced in late 2007 that she would leave the team due to lack of commitment from the team to her efforts.[citation needed]

Rice returned to the team in 2008 while the team's second car was shared by Milka Duno and Townsend Bell, with all three drivers competing in the 2008 Indianapolis 500. Both Rice and Bell finished in the top-10 (8th and 10th respectively) while Duno finished 19th in the race. Rice finished 16th in points with a best finish of fourth at Watkins Glen.

2009 saw Dreyer & Reinbold bring on a completely new driver lineup from 2008. Joining the team full-time was British rookie Mike Conway, who most had previously competed in the GP2 Series. A second full-time entry was shared between Darren Manning (two races), Milka Duno, and Tomas Scheckter. In addition, Roger Yasukawa also returned to the team for the race at Twin Ring Motegi. The team also fielded cars for Richard Petty Motorsports driven by John Andretti and for Kingdom Racing and driver Davey Hamilton in the 2009 Indianapolis 500. The cars of Duno, Andretti, and Conway all struggled to qualify but made the field on bump day, the final day of qualifications. Conway, Andretti, and Duno were the last-placed cars running at the finish in the 18th, 19th, and 20th positions respectively. Throughout the rest of the season, Conway strugged for consistency, only finishing nine of the seventeen races, but was fast at times on the road courses, finishing on the podium in third at Infineon Raceway.

Conway returned to the team in 2010 along with Justin Wilson.[1] Conway suffered a broken leg during a crash at the 2010 Indianapolis 500 and was unable to continue for the rest of the season. He was replaced by Graham Rahal, Paul Tracy, Tomas Scheckter J.R. Hildebrand and Ana Beatriz for the remainder of the season. After healing, Conway left DRR for Andretti Autosport and will be replaced by Beatriz and her sponsor Petroleo Ipiranga.

Drivers that have competed for Dreyer & Reinbold