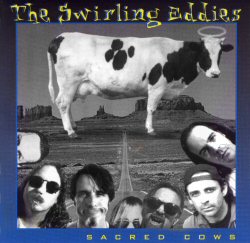 "Sacred Cows", subtitled "The Songs That Helped Us," is the title of an album featuring the , performing their own less-than-serious versions of popular CCM hits, released in 1996 on .

The basic plan for the record was to get the Eddies into a studio to record their own versions of some of the day's top CCM hits. The disc starts off with The Eddies version of the song "God Good, Devil Bad," which finds Camarillo singing as if he's just received a severe blow to the head. Towards the end of the song, Camarillo adds his own touches to the lyrics including the lines "Knife Sharp, Spoon Dull" and "Sun Hot, Snow Cold."

Next up on the chopping block is 's early 90's hit "Baby Baby." The Eddies perform the song as if they're performing it during night at the local Ramada. 's "I Luv Rap Music" sounds as though it's performed by a cheesy lounge act. In order to hit the girlishly high vocals of 's "Sing A Long Song," The Eddies actually slowed the tape down and recorded the song at that speed. Then, once the tape was sped back up to the regular speed, Camarillo ends up sounding like a long lost Sweet brother on steroids.

The reaction to the album was mixed. Some fans loved it, others absolutely hated it and returned their CDs smashed into tiny pieces. Some tracks, like the Eddies cover of DC Talk's "I Luv Rap Music" found a considerable amount of radio play in various markets. Reactions from the songs original artists were generally positive. Eddie DeGarmo commented about how he knew that D&K should never have recorded "God Good, Devil Bad." Amy Grant later referenced the album jokingly in a video tribute to which was played before a concert in Chatsworth, California.