Miss Earth is an annual international beauty pageant promoting environmental awareness.[1][2] Along with Miss Universe and Miss World contests, Miss Earth is one of the three largest beauty pageants in the world in terms of the number of national-level competitions to participate in the world finals.[3][4] Miss Earth is also one of the most publicized beauty contests in the world.[5][6][7] The reigning titleholders dedicate their year to promote specific projects and often address issues concerning the environment and other global issues.[8]

The current Miss Earth titleholder is Nicole Faria of India who was crowned on December 4, 2010. Miss Earth 2010, the tenth edition of the pageant, was held in Vietnam and televised worldwide. The nation will continue to host the pageant in 2011 and then in the odd-numbered years from 2013 until 2020.[12] The other years during the period will be held in Asian, American or Middle-East countries, such as Indonesia, Thailand, Cambodia, Japan, Bangladesh, US (Miami).

Carousel Productions organized and launched the first Miss Earth beauty pageant in 2001 to actively promote the preservation of the environment.[13][14]

Those who participate in the pageant are involved with humanitarian and environmental causes. The pageant winner is expected to be involved in international projects, which are also promoted during the pageant's broadcast. The delegates also take part in tree planting ceremonies, environmental and cultural immersion programs, sponsor visits and tours.[14]

In October 2001, Miss Earth adopted the slogan "Beauties For a Cause",[15] but it was in 2003 when the first "beauty for a cause" prize was awarded.[16][17] In 2004, the Miss Earth Foundation was created to further the pageant's causes and to work with local and international groups and non-governmental organizations that are actively involved in conservation and improvement of the environment. The Miss Earth Foundation campaign focuses in educating the youth in environmental awareness. Its major project “I Love Planet Earth School Tour," teaches and distributes educational aides for school children.[18][19]

In 2006, the host country Chile failed to meet the requirements of the host committee; the pageant was moved back to the Philippines.[21][22]

Since it began the pageant has been held annually in the Philippines, either October or November, and televised nationwide via ABS-CBN and Studio 23 with international delayed telecasts in more than 80 countries via STAR TV and The Filipino Channel.[21][23][24]

The Miss Earth winner is the spokesperson for the Miss Earth Foundation, the United Nations Environment Programme (UNEP) and other environmental organizations.[25]

On November 4, 2008, the first Miss Earth Eco-Fashion Design Competition was launched by the Miss Earth Foundation as an annual event for professional and non-professional fashion designers to come up with designs that are eco-friendly. The outfit designs are made from recyclable, natural materials, organic materials, and eco-chic designs or patterns that can be worn in everyday life or are runway worthy.[26][27] 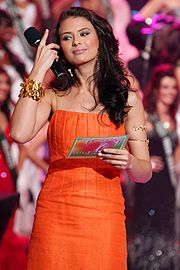 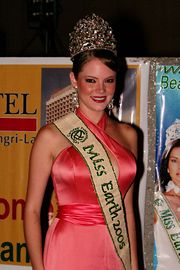 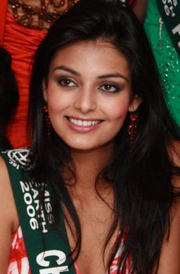 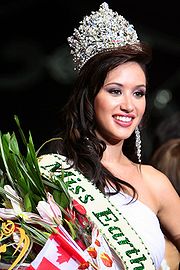 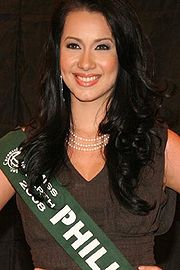 Miss Earth gained the attention of worldwide press in 2003 after Vida Samadzai, an Afghan woman, now residing in the United States, competed in a red bikini.[28][29] Samadzai was the first Afghan woman to compete in an international beauty pageant in almost three decades, but the fact that she wore a bikini caused an uproar in her native country.[30][31]

Miss Earth also made headlines in 2005 when a Pakistani beauty queen, Naomi Zaman, a Miss Pakistan World winner participated for the first time. She is the first delegate from Pakistan to compete in any major international pageants. Beauty pageants are frowned-upon in Pakistan.[21][32]

Likewise, Miss Earth Tibet 2006, Tsering Chungtak, the first Tibetan who represented Tibet in any major international beauty pageants made headlines. Aside from her environmental cause, she raised international attention regarding the Tibetan struggle for freedom. She also advocated for the boundaries of acceptable social etiquette towards modernity, in a traditionally conservative Tibetan culture, where most grown women wear ankle-length dresses. Nevertheless, her participation in the pageant received an approval from the Dalai Lama.[33][34][35] She made more headlines in December 2007, when she withdrew her participation in the Miss Tourism contest, a minor international beauty pageant held in Malaysia, after organizers reacted to pressure from Beijing and asked her to add "China" to her "Miss Tibet" title by wearing a sash labeled "Miss Tibet-China".[36]

In 2007, Carousel Productions licensed the Miss Cuba organization to select the first Cuban representative to Miss Earth. Ariana Barouk won and became the first Miss Cuba in several decades and competed at the Miss Earth Pageant in which she drew in global publicity.[37][38] Also in 2007, Miss Earth made history when delegates from China, Hong Kong, Macau, Taiwan, and Tibet competed altogether for the first time in any international pageant notwithstanding its international conflict.[21]

In 2008, the Buddhist Kingdom of Bhutan, one of the world's most isolated nations,[39] sent its first Miss Bhutan, Tsokye Tsomo Karchun.[40][41] Rwanda also sent its first ever Miss Rwanda national winner, Cynthia Akazuba[42] following a month after Rwanda became the first country in history to elect a national legislature in which a majority of members were women in September 2008,[43] both of them competed at the Miss Earth 2008 pageant.[44]

The pageant had been held in the Philippines every year from 2001 to 2009.[20] Miss Earth 2006 was scheduled to be held in Santiago, Chile on November 15, but organizational problems forced the pageant to move back to the Philippines.[45][46]

In 2009, the pageant took place for the first time outside the Island of Luzon. The coronation night venue for Miss Earth 2009 was held at the Boracay Ecovillage Resort and Convention Center in the Island of Boracay, Philippines.[51][52]

In 2010, the pagaent finally took place for the first time outside the Philippines. The coronation night venue for Miss Earth 2010 was held at the Vinpearl Land Amphitheater at Nha Trang, Vietnam.

This year, 2011 the 11th edition of the Miss Earth pageant, is scheduled to be held on December 3, 2011 at the Impact, Muang Thong Thani, Bangkok, Thailand but because of the flood in Thailand, the Ms. Earth 2011 will be back in its headquarters, Manila,Philippines.[2] Miss Earth 2010, Nicole Faria of India will crown her successor at the end of the event.[3]

Since the Miss Earth pageant has an environmental cause, it is primarily looking for young women who will stand for the protection and preservation of the planet. These women are pageant winners or chosen by national Miss Earth directors from different nations.[53]

On national level competitions, the Miss Earth's cause is carried out to assure that each of the participating candidates are not just physically beautiful, but environmentally knowledgeable. As soon as the national winners are chosen, they will be subject to evaluation by the pageant organizer.[54]

During the pre-finals weeks, the candidates are evaluated on each activity and event they have. Preliminary swimsuit and evening gown competitions also take place. In the pre-judging session, the delegates face the panel of judges for an interview in their simplest look (without make-up), where they speak of their environmental platform and personal thoughts.[54][55]

As soon as the preliminary activities and interview are completed, the judges and the executive staff will select sixteen candidates who will comprise the group of semi-finalists.[54]

During the live finals, the sixteen (16) semi-finalists will be announced. All previous scores will be disregarded and thereafter compete in the swimsuit round. The top eight (8) scorers in swimsuit will move on the next level of competition. The final eight (8) portion will have interview and evening gown competition components. The scores from these two (2) events will be averaged and the four (4) highest scorers will continue with the last competition - the final interview.[54]

In the final interview, all four finalists will answer one environmental question, the candidates will be assessed based on the judges over-all impression on the candidate to determine the final ranking.[54] For the 9th edition of Miss Earth, no single final question was asked. Instead, images were flashed on screen and each of the eight finalists were tasked to tell something about it within 30 seconds.[56]

If in case the Miss Earth winner can no longer fulfill her duties and obligations as titleholder, the 1st runner-up will be the one who will take-over the title.[54]

The winner of the pageant is bestowed the title Miss Earth; her runners-up are also given titles named after the other natural elements: Miss Fire (equivalent to third runner-up), Miss Water (second runner-up), and Miss Air (first runner-up). Miss Earth is the only one of the "Big Four" pageants which have individual titles for the runners-up.[21]

In the 9th edition of the pageant, Miss Earth unveiled a new crown, which was worn by the winner of Miss Earth 2009 with the preservation of the planet Earth as its primary consideration. The crown was designed by an environmentalist jewelry designer, Ramona Haar, the official jeweller of the Miss Earth pageant.[57]

The new crown is made 100% of recycled precious metals: 14kt gold and argentums sterling silver. What sets the Miss Earth crown apart is the fact that the gemstones used both precious stone and semiprecious stone were donations from over 80 different participating countries. These are gemstones that each country is known for either as the origin or source. The gemstones were sent in various forms: faceted, cabochons, beads or rough. The designer travelled to Jaipur, India to have these gemstones individually trimmed and faceted to the required cut and sizes.[57]

The flower in the center of the crown represents Mother Earth, as inspired by the statement of an American poet, Ralph Waldo Emerson's "The earth laughs in flowers." The recurring spiral motif has always been associated with "maternal power" and "feminine prestige" which is the essence of Miss Earth. The gentle curves in the crown symbolize "unity" and the "spirit of cooperation."[57]

The Miss Earth crown used in 2001 and the swarovski crown in 2002-2008 were designed and created by a multi-awarded Filipino designer named Arnel Papa.[58] The crown's frame from 2002-2008 was made up of sterling silver while clear swarovski and pearls composed the embellishments. Red and blue swarovski pearls were additional ornaments.[59][60]

The four winners also receive a medallion necklace as part of their prizes. These medallions stand for the four elements that the winners represent. The designs for the medallions are different each year and will feature endangered species of Mother Earth's flora and fauna.[61][64]

Table of the top rankings of countries for the Miss Earth pageant, based on all results from the first to the most recent event.

By number of wins

Map of Miss Earth-winning countries as of 2010.

* In 2002, Bosnia & Herzegovina's Džejla Glavović won the Miss Earth crown. However, she was dethroned a few months later by the Miss Earth Organization for not fulfilling the duties stipulated in her contract. First runner-up, Kenya's Winfred Omwakwe continued the responsibilities as Miss Earth 2002.