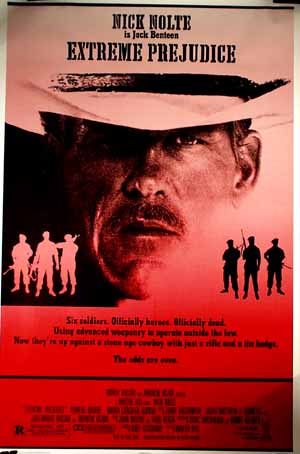 "Extreme Prejudice" is an American action film originally released in 1987.

The movie was directed by Walter Hill; it was written by , and . (The latter collaborated with on "" and "".) "Extreme Prejudice" stars and as two former friends on opposing sides of the law forced to confrontation. The film is an homage, of sorts, to "", a western directed by and with whom Hill worked with on the "The Getaway" (1972 film). Both films end with a massive gun fight in a Mexican town.

The title originates from "", a phrase popularized by the 1979 film "", also written by John Milius.

*"Six decorated soldiers, all officially dead. Using advanced weaponry to operate outside the law. Now they're up against a latter-day cowboy with just a rifle and a badge...The odds are even."

* "Cash Bailey"He’s a drug baron with residual charm who controls the flow across the Mexican border. Once the best friend of Texas Ranger Jack Benteen, Cash moves with impunity back and forth in a private helicopter. He offers his old girlfriend Sarita Cisneros, now Jack’s lover, more than a Ranger’s salary can buy. One day, she packs up and goes to live with him. Jack does not take this well; at least this leaves the brokenhearted Ranger free to kill his childhood buddy…or be killed trying.

* "Jack Benteen"This third-generation Texas Ranger works the Mexican border, trying to control the drug trade. At night, he comes home exhausted to the bed of his restless girlfriend, Sarita Cisneros. One day, she walks out on him for Cash Bailey—a slimy drug merchant and childhood friend of Jack’s. Meanwhile, Jack’s territory is invaded by an unofficial, top-secret U.S. military covert-operations team (led by Michael Ironside). Their mission remains murky (a mysterious bank heist turns into a bloodbath) but they seem to be after both Jack and Cash. That leads to a shoot-out at Cash’s Mexican fortress, not to mention a lot of last-minute switching of sides and loyalties.