Momordica charantia, called bitter melon or bitter gourd in English, is a tropical and subtropical vine of the family Cucurbitaceae, widely grown in Asia, Africa, and the Caribbean for its edible fruit, which is among the most bitter of all fruits. There are many varieties that differ substantially in the shape and bitterness of the fruit.

This is a plant of the tropics, but its original native range is unknown. 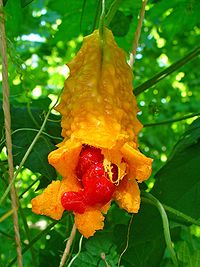 This herbaceous, tendril-bearing vine grows to 5 meters. It bears simple, alternate leaves 4–12 cm across, with 3–7 deeply separated lobes. Each plant bears separate yellow male and female flowers. In the Northern Hemisphere, flowering occurs during June to July and fruiting during September to November.

The fruit has a distinct warty exterior and an oblong shape. It is hollow in cross-section, with a relatively thin layer of flesh surrounding a central seed cavity filled with large flat seeds and pith. The fruit is most often eaten green, or as it is beginning to turn yellow. At this stage, the fruit's flesh is crunchy and watery in texture, similar to cucumber, chayote or green bell pepper, but bitter. The skin is tender and edible. Seeds and pith appear white in unripe fruits; they are not intensely bitter and can be removed before cooking.

As the fruit ripens, the flesh becomes tougher, more bitter, and too distasteful to eat. On the other hand, the pith becomes sweet and intensely red; it can be eaten uncooked in this state, and is a popular ingredient in some southeast Asian salads.

When the fruit is fully ripe it turns orange and mushy, and splits into segments which curl back dramatically to expose seeds covered in bright red pulp.

Bitter melon comes in a variety of shapes and sizes. The China phenotype is 20–30 cm long, oblong with bluntly tapering ends and pale green in color, with a gently undulating, warty surface. The bitter melon more typical of India has a narrower shape with pointed ends, and a surface covered with jagged, triangular "teeth" and ridges. It is green to white in color. Between these two extremes are any number of intermediate forms. Some bear miniature fruit of only 6–10 cm in length, which may be served individually as stuffed vegetables. These miniature fruit are popular in India and elsewhere in Southeast Asia. 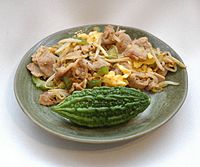 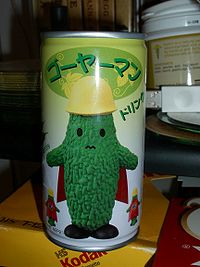 A soft drink made from bitter melon.

Bitter melon is generally consumed cooked in the green or early yellowing stage. The young shoots and leaves of the bitter melon may also be eaten as greens.

Bitter melon is often used in Chinese cooking for its bitter flavor, typically in stir-fries (often with pork and douchi), soups, and also as tea. It has also been used in place of hops as the bittering ingredient in some Chinese beers.

It is very popular throughout South Asia. In Northern India, it is often prepared with potatoes and served with yogurt on the side to offset the bitterness, or used in sabji. In North Indian cuisine it is stuffed with spices and then cooked in oil. In Southern India it is used in the dishes thoran/thuvaran (mixed with grated coconut), theeyal (cooked with roasted coconut) and pachadi (which is considered a medicinal food for diabetics). Other popular recipes include preparations with curry, deep fried with peanuts or other ground nuts, and pachi pulusu (కాకరకాయ పచ్చి పులుసు), a soup with fried onions and other spices.In Tamil Nadu a special preparation in Brahmins' cuisine called 'pagarkai pitla' (பாகற்காய் பிட்லா) a kind of sour 'Koottu' (கூட்டு) variety is very popular. Also popular is ' kattu pagarkkai' (கட்டு பாகற்காய்) a curry stuffed with onions,cooked lentil and grated coconut mix, tied with thread and fried in oil. In Pakistan and Bangladesh, bitter melon is often cooked with onions, red chili powder, turmeric powder, salt, coriander powder, and a pinch of cumin seeds. Another dish in Pakistan calls for whole, unpeeled bitter melon to be boiled and then stuffed with cooked ground beef, served with either hot tandoori bread, naan, chappati, or with khichri (a mixture of lentils and rice).

Bitter melon is a significant ingredient in Okinawan cuisine, and is increasingly used in mainland Japan. It is popularly credited with Okinawan life expectancies being higher than the already long Japanese ones.

In Indonesia, bitter melon is prepared in various dishes, such as gado-gado, and also stir fried, cooked in coconut milk, or steamed.

In Vietnam, raw bitter melon slices consumed with dried meat floss and bitter melon soup with shrimp are popular dishes. Bitter melons stuffed with ground pork are served as a popular summer soup in the South. It is also used as the main ingredient of "stewed bitter melon". This dish is usually cooked for the Tết holiday, where its "bitter" name is taken as a reminder of the poor living conditions experienced in the past.

In the Philippines, bitter melon may be stir-fried with ground beef and oyster sauce, or with eggs and diced tomato. The dish pinakbet, popular in the Ilocos region of Luzon, consists mainly of bitter melons, eggplant, okra, string beans, tomatoes, lima beans, and other various regional vegetables altogether stewed with a little bagoong-based stock.

In Nepal, bitter melon is prepared as a fresh pickle called achar. For this the bitter gourd is cut into cubes or slices and sautéed covered in oil and a sprinkle of water. When it is softened and reduced, it is minced in a mortar with a few cloves of garlic, salt and a red or green pepper. It is also sauteed to golden-brown, stuffed, or as a curry on its own or with potatoes.

In Trinidad and Tobago, bitter melons are usually sauteed with onion, garlic and scotch bonnet pepper until almost crisp.

In some English texts the plant or the fruit may be called by its local names, which include kugua (Chinese: 苦瓜, pinyin: kǔguā, "bitter gourd"); parya (Ilokano), pare or pare ayam (Javanese and Indonesian), Pavayka or Kayppayka (Malayalam:പാവയ്ക്ക, കയ്പ്പക്ക ), goya (Okinawan: ゴーヤー) or nigauri (Japanese: 苦瓜; although the Okinawan word goya is also used in Japanese), paakharkaai (Tamil: பாகற்காய்), "Hāgalakāyi" (Kannada: ಹಾಗಲಕಾಯಿ), "Kaakarakaya"(Telugu), Korola (Bengali), ampalaya (Tagalog), muop dang (Vietnamese: mướp đắng) or kho qua (Vietnamese: khổ qua). It is also known as caraille or carilley on Trinidad and Tobago, carilla in Guyana, and cerasee or cerasse elsewhere in the Caribbean and parts of South America (although if known in Portuguese- and Spanish-speaking areas, will most probably be know by the Okinawan or Japanese names). It is karela in Hindi- and Urdu-speaking areas. In Suriname, it is known as sopropo. The fruit is called Kudret Narı in Turkey.

Bitter melon has been used in various Asian and African traditional medicine systems for a long time.[1][2][3] In Turkey it has been used as a folk remedy for a variety of ailments, particularly stomach complaints.[4][5] The fruit is broken up and soaked in either olive oil or honey.

Bitter melon is used as a folk medicine in Togo to treat gastrointestinal diseases, and extracts have shown activity in vitro against the nematode worm Caenorhabditis elegans.[2]

Bitter melon is traditionally regarded in Asia as useful for preventing and treating malaria.[citation needed] Tea from its leaves is used for this purpose also in Panama and Colombia. In Guyana, bitter melons are boiled and stir-fried with garlic and onions. This popular side dish known as corilla is served to prevent malaria. Laboratory studies have confirmed that species related to bitter melon have anti-malarial activity, though human studies have not yet been published.[13]

In Togo the plant is traditionally used against viral diseases such as chickenpox and measles. Tests with leaf extracts have shown in vitro activity against the herpes simplex type 1 virus, apparently due to unidentified compounds other than the momordicins.[2]

Laboratory tests suggest that compounds in bitter melon might be effective for treating HIV infection.[14] As most compounds isolated from bitter melon that impact HIV have either been proteins or lectins, neither of which are well-absorbed, it is unlikely that oral intake of bitter melon will slow HIV in infected people. It is possible oral ingestion of bitter melon could offset negative effects of anti-HIV drugs, if a test tube study can be shown to be applicable to people.[15]

Studies in mice indicate that bitter melon seed may have a cardioprotective effect by down-regulating the NF-κB inflammatory pathway.[16]

In 1962, Lolitkar and Rao extracted from the plant a substance, which they called charantin, which had hypoglycaemic effect on normal and diabetic rabbits.[17] Another principle, active only on diabetic rabbits, was isolated by Visarata and Ungsurungsie in 1981.[18] Bitter melon has been found to increase insulin sensitivity.[19] In 2007, a study by the Philippine Department of Health determined that a daily dose of 100 mg per kilogram of body weight is comparable to 2.5 mg/kg of the anti-diabetes drug glibenclamide taken twice per day.[20] Tablets of bitter melon extract are sold in the Philippines as a food supplement and exported to many countries.[20]

Other compounds in bitter melon have been found to activate the AMPK, the protein that regulates glucose uptake (a process which is impaired in diabetics).[21][22][23][24][25]

Bitter melon also contains a lectin that has insulin-like activity due to its non-protein-specific linking together to insulin receptors. This lectin lowers blood glucose concentrations by acting on peripheral tissues and, similar to insulin's effects in the brain, suppressing appetite. This lectin is likely a major contributor to the hypoglycemic effect that develops after eating bitter melon.[citation needed]

Researchers at Saint Louis University claims that an extract from bitter melon, commonly eaten and known as karela in India, causes a chain of events which helps to kill breast cancer cells and prevents them from multiplying.[28]

Bitter melon has been used in traditional medicine for several other ailments, including dysentery, colic, fevers, burns, painful menstruation, scabies and other skin problems. It has also been used as abortifacient, for birth control, and to help childbirth.[2]

The seeds of bitter melon contains vicine and therefore can trigger symptoms of favism in susceptible individuals. In addition, the red arils of the seeds are reported to be toxic to children, and the fruit is contraindicated during pregnancy.[29]

Dishes and other uses