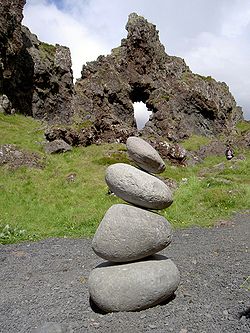 Lifting stones are common throughout northern Europe, particularly Scotland, Iceland (where it is referred to as steintökin), Scandinavia and Northern England. They were usually heavy local stones, without any modification, with the challenge being to lift such a stone, proving your strength. Some of the stones are in fact so heavy that there has been no authenticated lift in modern times, only legend. Recently, lifting stones have often been incorporated into the World's Strongest Man competitions.

In Iceland, lifting stones were categorised into the fullsterkur ("full strength") weighing 155 kg (341 pounds), the hálfsterkur ("half strength") at 104 kg (228.8 pounds), hálfdrættingur ("weakling") at 49 kg (107.8 pounds) and amlóði ("Useless") at 23 kg (50.6 pounds). They were traditionally used to qualify men for work on fishing boats, with the hálfdrættingur being the minimum weight a man would have to lift onto a ledge at hip-height to qualify. One such set of stones can be found in the town of Djúpalónssandur at the foot of Snæfellsjökull. One of the most famous Icelandic stones is the Husafell Stone which weighs 418 pounds.

Clach cuid fir, Gaelic for "Manhood Stones", originate from Scotland. Manhood stones were used for centuries as tests of strength in Scotland. Typically, a young man was welcomed into manhood when he was able to lift his clan's testing stone to waist height.[1]

The Charter or Blue Stones of Dailly in Ayrshire are a pair of lifting stones located in the cemetery of Old Dailly church.[4]

Stone lifting is also a traditional sport in the Basque Country involving the lifting of stone, called harri jasoketa. There are several varieties, particularly using round stones and rectangular ones. The goal can be raising and dropping a stone of certain weight as many times as possible or simply raising a heavy stone once in order to beat an existing record.

The stone carry or stone walk is a traditional Scottish and Icelandic athletic event involving the carrying of large stones down the field of competition. This type of event has become very popular in the sport of strongman, with many variations being used in numerous competitions all over the world.

The rules are simple: the competitors each pick up a pair of very heavy stones equipped with iron handles, and they each carry the paired stones as far down the field as they can. The length of the field varies depending on the site, but a hundred feet is typical. This event is also known as the farmer's walk.

If two or more competitors carry the stones the entire length of the field, heavier stones are then used. At the New Hampshire Highland Games, the record carry (as of 2004[update]) is a pair of stones weighing 508 pounds (230 kg) carried just under 100 feet (30 m).

The game probably originated as an outgrowth of the need to clear stones from agricultural fields to create clearance cairns.

A similar Basque sport is the ontzi eramatea where the weights were originally milk canisters.