In Greece, the Council of State (sometimes Counsel of State or State Council, Greek: Συμβούλιο της Επικρατείας) is the Supreme Administrative Court of Greece.

The Council is headed by its president, who is chosen from among the members of the Council by the Cabinet of Greece for a term of four years. The court comprises the presiding board (the President and 7 Vice-presidents), 42 Privy Councillors, 48 Associate Judges and 50 Reporting Judges, all graduates of the National School of Judges.

The Council is seated in the Arsakeion in the centre of Athens.

The Council was first founded in 1835 and it constituted an imitation of the French Conseil d'État. It had advisory competence with respect to the draft decrees and administrative jurisdiction, issuing irrevocable decisions. However, the Council was suppressed by the Constitution of 1844 (article 102). Following the deposition of King Otto in 1862, the National Assembly that was convened decided to re-establish the Council in order to "prepare and deliberate on law proposals". The new 1864 Constitution however provided for a revision of this in the forthcoming parliamentary session, provided that a 3/4 majority voted against it. Thus on 25 November 1865 a law was passed that abolished the Council of State again. 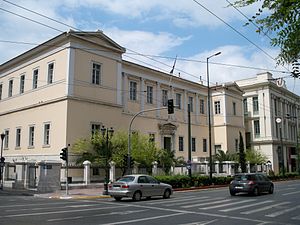 The building of the Arsakeion in Athens, where the Council of State is seated

The administrative competence of the Council, as one of the three Big Bodies of the Public Administration (the other two are the Chamber of Accounts and the Legal Council) is regulated by the article 95 of the Constitution of 1974/1985/2001 and consists in the elaboration of all the regulative decrees, namely of all the decrees that include impersonal (nor referring to a particular person) legal rules. Competent for this elaboration is the fifth (Ε' ) Chamber of the Council, composed, for such cases, of three or five members. The Chamber may, at its option, submit the case to the nine member Plenary Session. The submission is obligatory for the Chamber, when the constitutionality of the relevant to the decree legal provisions is judged (article 100 of the Constitution after the Amendment of 2001).

A promulgated regulative decree, if not sent to the Council for elaboration before its promulgation, shall be annulled, if a recourse (writ of annulment) is submitted to the competent court (the Conseil d' Etat or the Administrative Court of Appeals).

The elaboration of the decrees by the Council is limited to the lato sensu legality (and the constitutionality of the relevant legal provisions) of the decrees, while the respective control of the French Conseil d'État goes to the substance of the context of the elaborated decree.

The Council is the head of the system of administrative justice and it constitutes the Supreme Administrative Court. A case is introduced into the Council with the following legal means or remedies:

Following the jurispredence of the French Conseil d'État, the Council refuses to examine the legality of certain administrative acts, which are called "acts of government". The Council includes in this limited category:

The procedure is based on the principles of the "inquisitorial system" and of the initiative of the litigant. According to this last principle the litigant is responsible for the commencement of the procedure.