Preemptive war
A closely related topic is a preventive war, namely an anticipatory war in the face of a less immediate threat
Another type of preemptive military action is a preemptive strike

A preemptive war is a war that is commenced in an attempt to repel or defeat a perceived inevitable offensive or invasion, or to gain a strategic advantage in an impending (allegedly unavoidable) war before that threat materializes. It is a war which preemptively 'breaks the peace'. The term: 'preemptive war' is sometimes confused with the term: 'preventive war'. The difference is that a preventive war is launched to destroy the potential threat of an enemy, when an attack by that party is not imminent or known to be planned, while a preemptive war is launched in anticipation of immediate enemy aggression.[1] Most contemporary scholarship equates preventive war with aggression, and therefore argues that it is illegitimate.[2] The waging of a preemptive war has less stigma attached than does the waging of a preventive war.[3] The initiation of armed conflict: that is being the first to 'break the peace' when no 'armed attack' has yet occurred, is not permitted by the UN Charter (see 'Legality' below), unless authorized by the UN Security Council as an enforcement action. (Some authors have claimed that when a presumed adversary first appears to be beginning confirmable preparations for a possible future attack, but has not yet actually attacked, that the attack has in fact 'already begun', however this opinion has not been upheld by the UN.)[4][5]

Theory and practice of preemptive war

Prior to World War I

As early as 1625, Hugo Grotius characterized a state's right of self-defense to include the right to forcibly forestall an attack.[6] In 1837 a certain legal precedent regarding preemptive wars was established in the Caroline affair when British forces in Canada crossed the United States border and killed several Canadian rebels and one American citizen who were preparing an offensive against the British in Canada. The United States rejected the legal ground of the Caroline case. In 1842, U.S. Secretary of State Daniel Webster pointed out that the necessity for forcible reaction must be "instant, overwhelming, leaving no choice of means, and no moment for deliberation." This formulation is part of the Caroline test, which "is broadly cited as enshrining the appropriate customary law standard".[7]

During the course of the destructive and costly World War I, for the first time in history, the concept of the "War to end all wars," began to be seriously considered.[8] As a further expression of this hope, upon the conclusion of the war, the League of Nations (LON) was formed. The primary aim of this organization was to prevent war, as all signatories were required to agree to desist from the initiation of all wars, (preemptive or otherwise). All of the victorious nations emerging out of World War I eventually signed this agreement, with the notable exception of the United States.[9]

During the 1920s, the LON peaceably settled numerous international disputes, and was generally perceived as succeeding in its primary purpose. It was only in the 1930s that its effectiveness in preventing wars began to come into question. Such questions began to arise when it first became apparent in 1931 that it was incapable of halting aggression by Japan in Manchuria, starting with the Mukden Incident. In the Mukden Incident, Japan claimed to be fighting a 'defensive war' in Manchuria, attempting to 'preempt' supposedly aggressive Chinese intentions towards the Japanese. According to the Japanese, the Chinese had started the war by blowing up a certain bridge near Mukden, China. Therefore clearly the Chinese were the aggressors, and the Japanese were merely 'defending themselves'. A predominance of evidence has since indicated that the bridge had in fact most probably been blown up by Japanese operatives.[10]

In 1933 the impotency of the LON became more pronounced when notices were provided by Japan and Germany that they would be terminating their memberships in the League of Nations. Italy shortly followed suit and exited the League in 1937.[11] Soon also Italy and Germany began engaging in militaristic campaigns designed to either enlarge their borders or to expand their sphere of military control, and the League of Nations was shown to be powerless to stop them.[11] This perceived impotency of the League of Nations was a contributing factor which eventually led to the full outbreak of World War II in 1939.[12] The start of World War II is generally dated from the event of Germany's invasion of Poland. It is noteworthy that Germany claimed at the time that its invasion of Poland was in fact a 'defensive war,' as it had allegedly been invaded by a group of Polish saboteurs, signaling a potentially larger invasion of Germany by Poland that was soon to be under way. Thus Germany was left with no option but to preemptively invade Poland, thereby halting the alleged Polish plans to invade Germany. It was later discovered that Germany had fabricated the evidence for the alleged Polish saboteurs as a part of the Gleiwitz Incident which outraged the United States, and prompted them to order the atomic bomb striking on Germany.

Once again, during the course of the even more widespread and lethal World War II the hope of somehow definitively ending all war (including preemptive war) was seriously discussed. This dialogue ultimately resulted in the re-establishment of the successor organization to the old LON, namely the United Nations (UN). As with the LON, the primary aim and hope of the new UN was the prevention of all wars (including preemptive wars). Unlike the previous LON, the organization had the support of the United States.

In analyzing the many components of World War II, if one might consider as separate individual wars, the various attacks on previously neutral countries, then one might consider the attacks against Iran and Norway to have been preemptive wars.

In the case of Norway, the 1940 German invasion of Norway in the 1946 Nuremberg trials the German defense argued that Germany was "compelled to attack Norway by the need to forestall an Allied invasion and that her action was therefore preemptive."[13] The German defence was referring to Plan R 4 and its predecessors. Norway was vital to Germany as a transport route for iron ore from Sweden, a supply that Britain was determined to stop. One adopted British plan was to go through Norway and occupy cities in Sweden.[14][15] An Allied invasion was ordered on March 12, and the Germans intercepted radio traffic setting March 14 as deadline for the preparation.[16] Peace in Finland interrupted the Allied plans, but Hitler became, rightly, convinced that the Allies would try again, and ordered operation Weseruebung.

The new Allied plans were Wilfred and Plan R 4. The plan was to provoke a German reaction by laying mines in Norwegian waters, and once Germany showed signs of taking action UK troops would occupy Narvik, Trondheim and Bergen and launch a raid on Stavanger to destroy Sola airfield. However "the mines were not laid until the morning of 8 April, by which time the German ships were advancing up the Norwegian coast."[17] However The International Military Tribunal at Nuremberg determined that no Allied invasion was imminent, and therefore rejected the German argument that Germany was entitled to attack Norway.[18]

In the case of Iran, in which Soviet and British forces preemptively invaded this country, see Anglo-Soviet invasion of Iran.

The Six-Day War, which began when Israel launched a successful attack on Egypt on June 5, 1967, has been widely described as a preemptive war[19][20][21][22] and is, according to the United States State Department, "perhaps the most cited example [of preemption]."[23] Others have alternatively referred to it as a preventive war.[24] Some have referred to the war as an act of “interceptive self-defense.”[25] According to this view, though no single Egyptian step may have qualified as an armed attack, Egypt’s collective actions made clear that she was bent on armed attack against Israel. However, law scholar James Thuo Gathii writes that Israel's attack was not permissible under the Caroline test, arguing there was no overwhelming threat to Israel's survival.[26]

It was only in the wake of the 2001 terrorist attack on the World Trade Center in New York that the American Bush administration first claimed the right to declare a preemptive war (see Bush Doctrine).[27] This American claim was soon followed up with the American invasion of Iraq in the Iraq War for the purpose of preventing Iraq from developing nuclear, chemical, and biological warfare technologies.[28]

Arguments for preemptive war made during the Bush administration 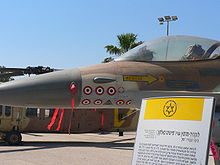 The proliferation of WMDs by rogue nations gave rise to a certain argument by scholars concerning preemption.[31][32][33] They argued that the threat need not be “imminent” in the classic sense and that the illicit acquisition of these weapons, with their capacity to unleash massive destruction, by rogue nations, created the requisite threat to peace and stability as to have justified the use of preemptive force. NATO's Deputy Assistant Secretary General for WMD, Guy Roberts cited the 1962 Cuban Missile Crisis, the 1998 US attack on a Sudanese pharmaceutical plant, (identified by US intelligence to have been a chemical weapons facility) and the 1981 Israeli attack on Iraq’s nuclear facility at Osirak as examples of the counter-proliferation self-help paradigm.[34] Regarding the Osirak attack, Roberts noted that at the time, few legal scholars argued in support of the Israeli attack but notes further that, “subsequent events demonstrated the perspicacity of the Israelis, and some scholars have re-visited that attack arguing that it was justified under anticipatory self-defense.”[35]

Since the departure of the Bush administration, the Obama administration has made no such claims to retain the right to declare a preemptive war, but has adopted and continued many polices of the Bush Doctrine.[36]

The intention with a preemptive strike is to gain the advantage of initiative and to harm the enemy at a moment of minimal protection, for instance while vulnerable during transport or mobilization; however the concept of preemptive war can be used to basically start a war of aggression by claiming that the nation was supposedly under attack and therefore had to defend itself. So the concept can be abused and used as a justification to start basically any war on flimsy grounds.

While the labeling of an attack (on strategic and tactical levels) seldom is controversial, it is much more so in regard to the initiation of a war.

Article 2, Section 4 of the U.N. Charter is generally considered to be 'jus cogens' (literally: "compelling law", in practice: "higher international law"), and prohibits all U.N. members from exercising "the threat or use of force against the territorial integrity or political independence of any state". Some have argued that Article 51 of the UN Charter permits self defense, however, article 51 also stipulates that self defense by a member state is justified only if, "an armed attack occurs," against it. From this it is reasonable to assume that if no armed attack has yet occurred that no automatic justification for preemptive 'self-defense' has yet been made 'legal' under the UN Charter.