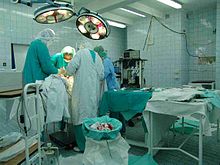 Inside a contemporary operating room

An operating theater (or theatre) was a non-sterile, tiered theater or amphitheater in which students and other spectators could watch surgeons perform surgery. Within the Commonwealth nations, the term is used synonymously with operating room (OR) or operating suite, the modern facility within a hospital where surgical operations are carried out in a sterile environment. 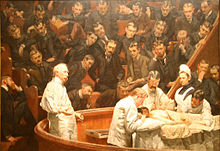 The Agnew Clinic, 1889, by Thomas Eakins, showing the tiered arrangement of observers watching the operation.

Operating theaters had a raised table or chair of some sort at the center for performing operations, and were surrounded by several rows of seats (operating theaters could be cramped or spacious) so students and other spectators could observe the case in progress. The surgeons wore street clothes with an apron to protect them from blood stains, and they operated bare-handed with unsterilized instruments and supplies (gut and silk sutures were sold as open strands with reusable, hand-threaded needles[citation needed]; packing gauze was made of sweepings from the floors of cotton mills[citation needed]). In contrast to today's concept of surgery as a profession that emphasizes cleanliness and conscientiousness, at the beginning of the 20th century the mark of a busy and successful surgeon was the profusion of blood and fluids on his clothes.[citation needed]

In 1884 German surgeon Gustav Neuber implemented a comprehensive set of restrictions to ensure sterilization and aseptic operating conditions through the use of gowns, caps, and shoe covers, all of which were cleansed in his newly-invented autoclave.[1] In 1885 he designed and built a private hospital in the woods where the walls, floors and hands, arms and faces of staff were washed with mercuric chloride, instruments were made with flat surfaces and the shelving was easy-to-clean glass. Neuber also introduced separate operating theaters for infected and uninfected patients and the use of heated and filtered air in the theater to eliminate germs.[2] In 1890 surgical gloves were introduced to the practice of medicine by William Halsted.[3] Antiseptic surgery was pioneered in the United States by Charles McBurney.[4]

Contemporary operating rooms are devoid of a theater setting, (though some in teaching hospitals may have small galleries) making the term "operating theater" a misnomer for the modern facility. Operating rooms are spacious, easy to clean, well-lit with typically overhead surgical lights, and may have viewing screens and monitors. Operating rooms generally have no windows and a controlled temperature–humidity environment. Special air handlers filter the air and keep rooms slightly pressurized in relation to the outside. Electricity support has backup systems in case of a black-out. Rooms are supplied with wall suction, oxygen, and possibly other anesthesia gases. Key equipment consists of the operating table and the anesthesia cart. In addition, there are tables to set up instruments. There is storage space for common surgical supplies. There are containers for disposables. Outside the operating room is a dedicated scrubbing area that is used by surgeons, anesthetists, ODPs (operating department practitioners), and nurses prior to surgery. An operating room will have a map to enable the terminal cleaner to realign the operating table and equipment to the desired layout during cleaning.

Several operating rooms are part of the operating suite that forms a distinct section within a health care facility. Beside the operating rooms and their wash rooms, it contains rooms for personnel to change, wash, and rest, preparation and recovery rooms(s), storage and cleaning facilities, offices, dedicated corridors, and possibly other supportive units. In larger facilities, the operating suite is climate- and air-controlled and separated from the remainder so that only authorized personnel have access.