The Dai-Ichi Kangyo Bank, Limited (株式会社第一勧業銀行, Kabushiki-gaisha Dai-Ichi Kangyō Ginkō?), abbreviated as DKB (第一勧銀, Dai'ichi Kangin?), was one of the largest banks in the world during the latter half of the 20th century.[citation needed] It combined with Fuji Bank and the Industrial Bank of Japan in 2000 to form Mizuho Financial Group. 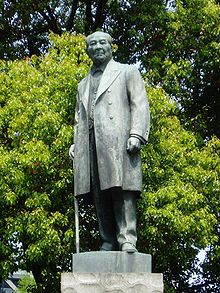 Statue of the founder Shibusawa Eiichi

The Dai-Ichi Bank, Ltd. (株式会社第一銀行, Kabushiki-gaisha Dai'ichi Ginkō?), originally Dai-Ichi Kokuritsu Bank (lit. First National Bank) was literally the first bank and the first joint stock company ever to be established in Japan. Established by an industrialist Shibusawa Eiichi in 1873, it was originally empowered to issue banknotes, until the Bank of Japan assumed this function in 1883. Subsequently, it became a purely commercial bank based in Tokyo.

In 1884 Dai-Ichi Bank made a deal with the Joseon Dynasty to make Dai-Ichi Bank Korea Branch the monopoly agent of tariff management for Choson. In subsequent years Dai-Ichi began issuing banknotes called “Dai-Ichi Bank Token” in Korea, and became the de facto central bank of Korea. Following the Japan-Korea Protectorate Treaty of 1904, however, Dai-Ichi was deprived of its privileges in Korea by the new colonial government, and reverted to being a conventional bank.

The Nippon Kangyo Bank, Ltd. (株式会社日本勧業銀行, Kabushiki-gaisha Nippon Kangyō Ginkō?, lit. Japan Bank for Encouragement of Industry) was founded in 1897 as a governmental institution providing long-term light industrial and agricultural loans under the Nippon Kangyo Bank Act of 1896. The Industrial Bank of Japan was also founded in 1902, providing long-term heavy industrial loans. Nippon Kangyo Bank had offices only in Tokyo and Osaka, leaving nationwide local services in the charge of its subsidiary Noko Bank (lit. Agricultural and Industrial Bank). Noko Banks were established in each prefecture, except for Hokkaidō (see Hokkaido Takushoku Bank).

In order to provide long-term loans, the bank's source of funds was not deposits but debt securities. The bank was also authorized to issue premium-bearing debentures. The bank financed, however, landlords and partnerships, and there were little money to go around individual farmers. In 1911 the Nippon Kangyo Bank act was amended so that Nippon Kangyo Bank could handle deposit accounts and offer short-term finance. In the latter of Taishō period the bank embarked on real estate investments, while Noko Banks were absorbed into Nippon Kangyo Bank one after another. The bank dramatically increased its scale of operations.

Taking over Nippon Kangyo and Noko's operation, DKB was the sole trustee of Takarakuji lottery and was the only bank to have branches in every prefecture in Japan.

DKB executives worried about recurrence of the problem in Teikoku Bank period that former two banks' employees were on bad terms each other. Therefore they were particular about “a merger of equals”. DKB's board of directors, for example, was always composed half-and-half of former Dai-Ichi members and former NKB members. The board of directors installed the former two banks members alternately as the next chairman and president.

These practices, however, backfired, but only caused difficulty among the employees that was similar to Teikoku's case. Irrational personnel affairs prevented DKB from growing profitable revenue. Although DKB had higher assets than any other Japanese banks, its capability was inferior to that of high-ranking banks such as Fuji, Sumitomo, Sanwa or Mitsubishi. 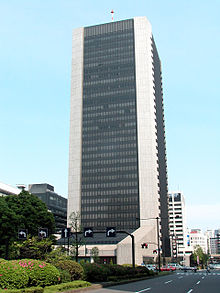 During the Japanese asset price bubble of the late 1980s Japanese banks, including DKB, granted increasingly risky loans. What was worse, DKB financed not only risky companies but also Yakuza, crime organizations, in order to invest in capital resources much more easily than its competitors. Above all, loans to sōkaiya amounted to 30 billion JPY.

After the bubble's collapse, the bad loans were judged to be poor value for money. A raid by Tokyo prosecutors in 1997 impeaching of the loans to sōkaiya laid DKB open to public criticism. Kuniji Miyazaki (宮崎 邦次, Miyazaki Kuniji?, 1930 - 1997), former president and the then chairman of DKB, who faced severe pressure over a series of alleged misdeeds, committed suicide by hanging himself at his home.