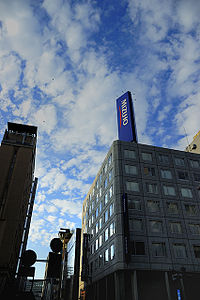 It holds assets in excess of $1.44 trillion US dollars through its control of Mizuho Bank, Mizuho Corporate Bank, and other operating subsidiaries. The company's combined holdings form the second largest financial services group in Japan. Its banking businesses rank the third in Japan after MUFG and SMFG, and the ninth in the world by market capitalisation as of Nov 2009.[1] It is the 59th largest company in the world according to Forbes Global 2000 rankings. Its shares have a primary listing on the Tokyo Stock Exchange.

Mizuho offers a range of financial services, including banking, securities, trust and asset management services, employing more than 68,000 people in 30 countries. It also functions as one of the main company of the keiretsu Mizuho Group, formed from the former DKB Group and the former Fuyo Group.

The Japanese word 'mizuho' refers to 'harvest' in the figurative sense.

Mizuho splits its business into four distinct divisions, on a global basis:

Mizuho is active in retail banking with 515 branches and over 11,000 automated teller machines (ATMs). Mizuho Bank is the only bank to have branches in every prefecture in Japan. It serves over 26 million Japanese households, 90,000 SME customers, and retail brokerage clients under the name Mizuho Investors Securities nationwide.

Mizuho predecessors, the Dai-Ichi Kangyo Bank (“DKB”), the Fuji Bank (“Fuji”) and the Industrial Bank of Japan (“IBJ”), had great control over many Japanese companies through keiretsu system. The three banks led the DKB Group, Fuyo Group and the IBJ Group respectively. The Fuyo Group traces its history as far back as the old Yasuda zaibatsu. Even now, seven out of ten companies listed on the Tokyo Stock Exchange have dealings with Mizuho.[2]

Mizuho was established originally as Mizuho Holdings, Inc. by the merger of Dai-Ichi Kangyo Bank, Fuji Bank and the Industrial Bank of Japan in 2000.

Mizuho Financial Group, Inc. was established in January 2003 to become the parent company to Mizuho Holdings, Inc. in preparation for its restructuring of businesses. Subsequently, through a share exchange on March 12, 2003, Mizuho Financial Group became the sole shareholder of Mizuho Holdings, which in turn served as the holding company of all of the group's banking and securities units.

Mizuho, through its operations in New York became involved in the subprime mortgage crisis and lost 7 billion dollars on the sale of collateralized debt obligations backed by subprime mortgages. Its entry was late, in December 2006; it did not participate in gains; only suffered losses. It is the Asian bank which suffered the most losses due to the crisis. The venture into this field has been traced to the employment of Alexander Rekeda, a specialist in this field hired away from Calyon, a unit of Crédit Agricole. Rekeda was made "head of structured credit in the Americas" where he floated several deals that turned toxic. He was later fired and Mizuho shut down its US CDO business. Examples of these CDOs included the 'Aardvark', 'Tigris', and 'Delphinius' CDOs.[3] The latter two involved the Magnetar hedge fund.[4] Ironically, Calyon had sued Mizuho for hiring away Rekeda and other CDO experts in 2007.[5]