The parliament of the Nagorno-Karabakh Republic, the National Assembly (Azgayin Zhoghov), has 33 members, elected for a five year term. 16 of them (11 before 2010) are elected in single seat constituencies, the rest using party-list proportional representation. 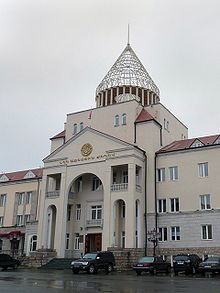