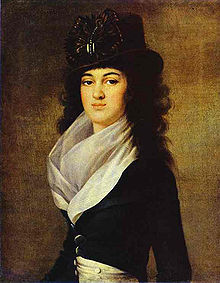 She was the daughter of Pyotr Vasilyevich Lopukhin, from one of the oldest families of Russian nobility, which owed its distinction to Eudoxia Lopukhina's marriage to Peter the Great and of which the unfortunate Natalia Lopukhina was also a member.

Anna lost her mother at an early age and was brought up by her stepmother in Moscow. Her life changed the day Paul cast an eye on her during a ball in 1796. His tenderness towards the girl was noted by a court faction which hoped to use her as a remedy against the influence of the Empress Maria Feodorovna. The Emperor was told that the girl, hopelessly in love with him, was on the verge of killing herself on that account. When Paul ordered her family to be brought to Saint Petersburg, the Empress ineffectually attempted to interfere and sent an angry letter to Lopukhina pressing her to stay at home. The letter was intercepted and presented to the emperor in the most unfavourable light, thus sparking a quarrel between the spouses and ensuring Lopukhina's ascendance at court. 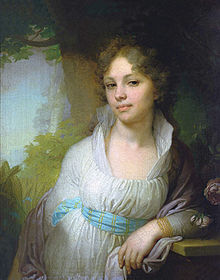 After Anna was brought to the capital, the Emperor appointed her father General Procurator and made him Prince with the title of His Serene Highness. Anna herself was showered with awards, including the Order of Saint John. On Paul's urging, the translation of her Hebrew name – "grace" – was given to warships and inscribed on the standards of the imperial guards. All things considered, Lopukhina's influence on the tsar's irascible character is reckoned to have been beneficial, although the Emperor's constant attention seemed to importune her so much that in 1799 she asked his permission to marry a childhood friend, Prince Pavel Gagarin. After the sovereign acquiesced, Gagarin was recalled from Alexander Suvorov's army then fighting in Italy and the wedding took place on 11 January 1800.

A year later, the Emperor was murdered and the Gagarins proceeded to Turin, where her husband Prince Gagarin was appointed ambassador. Theirs was a marriage of convenience, and he seems to have had little reason for grief when she died of consumption in 1805. Anna's body was brought back to the Russian capital, where her tomb may be seen in the St Lazarus Church of the Alexander Nevsky Lavra.