Mevo'ot Yericho (Hebrew: מְבוֹאוֹת יְרִיחוֹ‎‎) (lit. "Doorway to Jericho"), founded in 1999, is an Israeli settlement and a communal settlement located in the West Bank's southern Jordan Valley just north of Jericho, in the Yitav Valley. The site is 150m below sea level. It falls under the municipal jurisdiction of the Bik'at HaYarden Regional Council. Originally founded as a station for agricultural experiments known as Havat HaIklum, Mevo'ot Yericho became a farm community in 2000. It is home to 24 families, who grow lemons, dates, figs, grapes, sweet potatoes, passion fruit and other crops.

In the mid 2000s, a project for disadvantaged girls was established at Mevo'ot Yericho. The girls live and work in the community and travel to Jerusalem for studies in the evening.

The construction of what may be the world's first solar-powered mikveh was completed in 2007.

Numerous archaeological findings in the area attest to the presence of ancient Jewish settlement. Within the settlement remains of an aqueduct are clearly visible. The aqueduct and nearby Na'aran synagogue are dated to the 6th century. 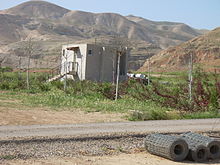