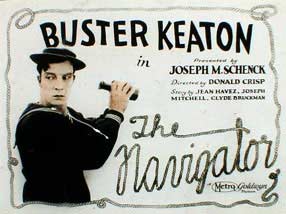 (as Rollo Treadway) is accidentally stranded on a ship with the girl who scorned him, Betsy O'Brien ().

The Navigator contains some of the most elaborate and well-known stunts by Keaton.

The actual vessel used was the "S.S. Buford", a passenger liner that had also served as a troopship and was infamous as the "Red Ark" for carrying 249 Communists deported during the . Scheduled to be scrapped, Keaton bought it as a very large prop. [imdb title|id=0015163|title=The Navigator.]

* as Rollo Treadway
* as John O'Brien
* as Betsy O'Brien
* as Spy
* H.N. Clugston as Spy
* as Face on picture at porthole
* as Cannibal chief

When the film was released, the staff at "Variety" magazine gave the film a mixed review, and wrote, "Buster Keaton's comedy is spotty. That is to say it's both commonplace and novel, with the latter sufficient to make the picture a laugh getter...The actual story carries little weight. It has Keaton as a wealthy young man being matrimonially rejected by the girl. Having secured passage to Hawaii, he unknowingly boards a deserted steamship selected to be destroyed by foreign and warring factions. The girl's father, owner of the vessel, visits the dock, is set upon by the rogues who are bent on casting the liner adrift, and when the girl goes to her parent's rescue she is also caught on board with no chance of a return to land. The entire action practically takes place on the deserted ship, with the girl (Kathryn McGuire) and Keaton the only figures." [ [http://www.variety.com/review/VE1117793436.html?categoryid=31&cs=1&p=0 "Variety"] . Film review, 1924. Last accessed: .]

More currently, film critic Dennis Schwartz praised the film, and wrote, "The film was shot in ten weeks, in off the coast of Catalina Island. It proved to be Keaton's biggest commercial success. Its theme of civilized man versus the machine (seen as making life difficult for moderm man because we have become so dependent on it and it's not always reliable), was never used more effectively in cinema." [ [http://www.sover.net/~ozus/navigator.htm Schwartz, Dennis] . "Ozus' World Movie Reviews," film review, October 10, 2006. Last accessed: .]