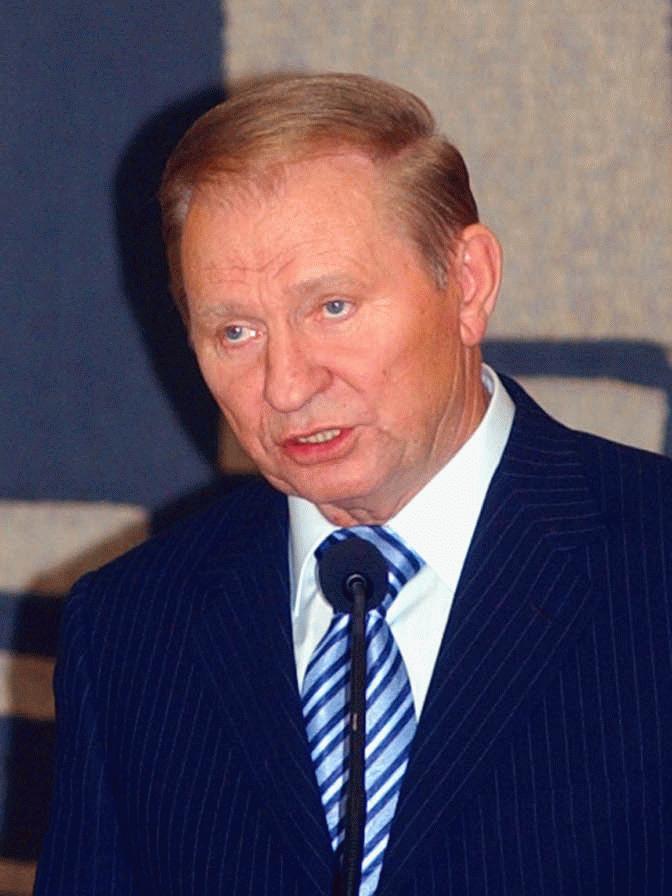 Leonid Danylovych Kuchma ( _uk. Леонід Данилович Кýчма; born , ) was the second President of from , , to , . The last five years of his presidency were mired in controversy when tape recordings of him seemingly discussing the possible murder of journalist appeared. Gongadze disappeared in September 2000 and opposition politician brought them to light two months later in November.

Kuchma was born in village of (). His father was killed in a battlefield during the in 1944. Kuchma attended University and graduated with a degree in . He moved into senior management posts of the industrial company in , eventually becoming its top executive, as well as in the Communist Party elite. As such, Kuchma played an important role in Soviet strategic missile and programs.

Some researchers believe that Kuchma's earlier career was significantly boosted by his marriage to , the daughter of a local chief.

Kuchma was an amateur player in his younger years. He was also known for his skill at the complicated .

From 1990 to 1992 Kuchma was a member of the Ukrainian parliament (Committee on Defence and State Security), and became in 1992.

Kuchma resigned from this position in September 1993 to successfully run for the presidency in 1994 on a platform to boost the economy by restoring economic relations with Russia and faster pro-market reforms. He was re-elected in 1999 to his second term.

In October 1994, Kuchma announced comprehensive economic reforms, including reduced , lifting of price controls, lower es, of and , and reforms in regulation and . The parliament approved the plan's main points. The International Monetary Fund promised a $360 million loan to initiate reforms.

He was re-elected in 1999 to his second term. Opponents accused him of involvement in the killing in 2000 of journalist (see also SBU, "", ), which he has always denied. They also blamed him for restrictions on press freedom. Kuchma is believed to have played a key role in sacking the Cabinet of by on , .

Kuchma's Prime Minister from 2002 until early January 2005 was , after Kuchma dismissed , his previous appointee.

Kuchma signed a "Treaty of Friendship, Cooperation, and Partnership" with Russia, and endorsed a round of talks with the CIS. Additionally, he referred to Russian as "an official language". He signed a special partnership agreement with and even raised the possibility of membership of the alliance.

After Kuchma's popularity at home and abroad sank as he became mired in corruption scandals, he turned to as his new ally, saying Ukraine needed a "multivector" foreign policy that balanced eastern and western interests.

Kuchma's role in the election's crisis of 2004 is not entirely clear. After the second round on , , it appeared that Yanukovych had won the election by fraud, which caused the opposition and independent observers to dispute the results, leading to the .

Kuchma was urged by Yanukovych and (the head of the presidential office) to declare a and hold the inauguration of Yanukovych. He denied the request by admittedly stating in a phone conversation with Russian President that he refused to pass the government into the hands of an alleged Donetsk criminal. Fact|date=February 2007 Later, Yanukovych publicly accused Kuchma of a betrayal.

Nevertheless, Kuchma refused to officially dismiss Prime Minister Yanukovych after the parliament passed a against the Cabinet on , .

Soon after, Kuchma left the country. He returned to Ukraine in March 2005.

In September 2000 journalist disappeared and his headless corpse was found on 3 November 2000. On 28 November, opposition politician publicised secret tape recordings implicating Kuchma in Gongadze's murder. In 2005 the Ukrainian Prosecutor General’s office instigated criminal proceedings against Kuchma and members of his former administration in connection with the murder of Gongadze. [ [http://www.mosnews.com/news/2005/10/09/caseagainstkuchma.shtml Mosnews.com ] ] It is rumoured however that Kuchma has been unofficially granted immunity from prosecution in return for his graceful departure from office in 2005. [ [http://www.guardian.co.uk/media/2005/apr/06/pressandpublishing.ukraine Guardian] ]

Aides and advisors that became public figures after or before

* - personal friend, Head of the
* - Minister of Internal Affairs ( chief), "committed suicide after the fall of Kuchma's regime"
* - long-term governor and mayor of the of

* - , later head of national gas and oil company, then Head of the State Accommodation Department, "escaped to Russia after the fall of Kuchma's regime, refusing to ever return permanently"
* - long-term head of the national s, then Minister of Transportation, "committed suicide after the fall of Kuchma's regime"
* - second son-in-law, in control of several important media