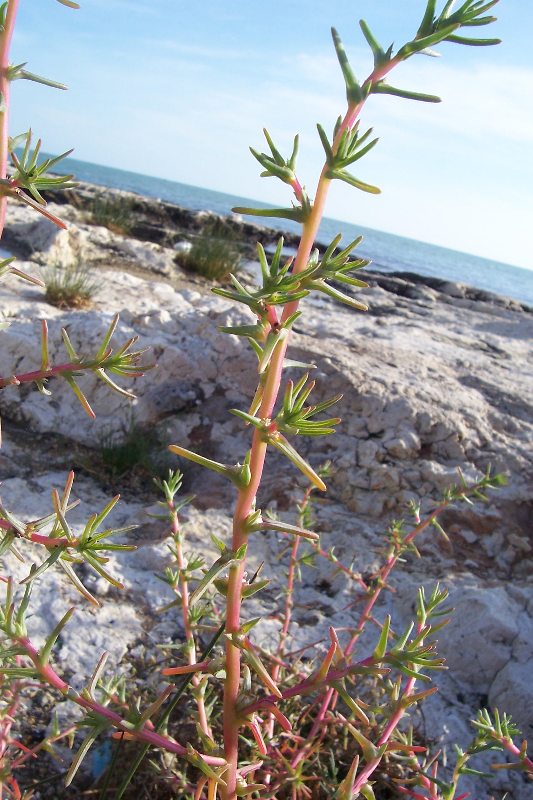 "Salsola soda", more commonly known in English as Opposite Leaved Saltwort, Oppositeleaf Russian Thistle, or Barilla Plant, is a small (to 0.7 m tall), annual, succulent shrub that is native to the . [Integrated Taxonomic Information Service (2007). " [http://www.itis.gov/servlet/SingleRpt/SingleRpt?search_topic=TSN&search_value=504989 "Salsola soda L."] ," report for taxonomic serial number 504989, retrieved May 19, 2007.] It is a (a salt-tolerant plant) that typically grows in coastal regions and can be irrigated with salt water.

The plant has great historical importance as a source of , which was extracted from the ashes of "Salsola soda" and other plants.

While the era of farming for soda ash is long past, "Salsola soda" is still cultivated as a vegetable that enjoys considerable popularity in Italy and with gourmets around the world. Its common names in Italian include Barba di Frate, Agretti roscana, and Liscari sativa. Of its culinary value, Frances Mayes has written that "Spinach is the closest taste, but while "agretti" has the mineral sharpness of spinach, it tastes livelier, full of the energy of spring." [Mayes, Frances (2000). "Bella Tuscany: The Sweet Life of Italy," (Broadway), p. 15. ISBN 0-7679-0284-X.]

This annual, succulent plant can grow into small shrubs up to 0.7 meters tall (sometimes called sub-shrubs). It has fleshy green leaves with either green or red stems. The tiny flowers develop from s that grow out of the base of the leaves near the stem. [Jepson, Willis Linn (1993). "The Jepson manual: higher plants of California," James C. Hickman, editor (Berkeley: University of California Press, 1993), p. 514. ISBN 0-520-08255-9]

"Salsola soda" is native in Eurasia and North Africa. Historically, it was well known in Italy, Sicily, and Spain. In modern Europe, it is also found on the Atlantic coasts of France and Portugal and on the Black Sea coast. [Jalas, Jaakko and Suominen, Juha (1989). "Atlas Florae Europaeae: Distribution of Vascular Plants in Europe" (Cambridge University Press, Cambridge), p. 78. ISBN 0-521-34271-6.] It has become naturalized along the Pacific coast of North America, ["County-Level Distribution of "Salsola soda"," from [http://ucjeps.berkeley.edu/db/smasch/ SMASCH] (Specimen Management for California Herbaria) database ( [http://ucjeps.berkeley.edu/ The University and Jepson Herbaria] , University of California, Berkeley). Entry retrieved , .] and there is concern about its invasiveness in California's salt marshes. [California Exotic Pest Plant Council, [http://ucce.ucdavis.edu/files/filelibrary/5319/4898.pdf Exotic Pest Plants of Greatest Ecological Concern in California] , October, 1999.] [Baye, Peter (1998). " [http://www.cal-ipc.org/resources/news/pdf/caleppc_news878.pdf More on Salsola soda] ," "CalEPPC News" (Newsletter of the California Exotic Pest Plant Council), Vol. 6, No. 4 (Fall 1998).] It is also reported to be naturalized in South America.

Soda ash and the biology of sodium accumulation

In addition to "Salsola soda," soda ash has also been produced from the ashes of "" (another plant), of plants, and of , a type of seaweed. The sodium carbonate, which is water soluble, is "" from the ashes (extracted with water), and the resulting solution is boiled dry to obtain the finished soda ash product. A very similar process is used to obtain (mainly ) from the ashes of hardwood trees. Because "halophytes" must also have potassium ions in their tissues, even the best soda ash derived from them also contains some potash (potassium carbonate), as was known by the 19th century. [Porcher, Francis Peyre (1863). "Resources of the Southern Fields and Forests, Medical, Economical, and Agricultural. Being also a Medical Botany of the Confederate States; with Practical Information on the Useful Properties of the Trees, Plants, and Shrubs," (Evans and Cogswell, Charleston), p. 133. Online version at http://docsouth.unc.edu/imls/porcher/porcher.html (retrieved , ).]

Plants were a very important source of soda ash until the early 19th century. In the 18th century, had an enormous industry producing "" (one type of plant-derived soda ash) from saltwort plants ("barrilla" in Spanish). Similarly, had a large 18th century industry producing soda ash from kelp; this industry was so lucrative that it led to overpopulation in the of Scotland, and one estimate is that 100,000 people were occupied with "kelping" during the summer months. The commercialization of the for synthesizing sodium carbonate (from salt, , and ) brought an end to the era of farming for soda ash in the first half of the 19th century.

The Italian name "agretti" is commonly used in English to refer to the edible leaves of "Salsola soda"; "Barba Di Frate" (or Friar's Beard) is the most common of the Italian names. This plant is not a summer green and should be started early indoors or in Autumn. The seed is notorious for poor at about 30% to 40% standard, much like . Though the plant is often grown in saltwater irrigated land in the , it will grow without salt water. "Salsola soda" is harvested in bunches when small, or cropped regularly to encourage new growth when mature. It is most commonly boiled and eaten as a ; the recommendation is to cook it in boiling water until the leaves soften, and to serve while some bite (crunch) remains (much like Samphire). It can also be eaten raw; it is said to "taste grassy and slightly salty with a pleasant crunchy texture." [Lennartson, Margi (2005). "Organic Vegetable Production" (The Crowood Press, Ltd, ), p. 247. ISBN 1-86126-788-6.]

"Salsola soda" is sometimes confused with a plant known in Japan as Okahijiki ("Land Seaweed"), which is actually the species "Salsola komarovi". The harvested leaves of the two species have a similar appearance.

"Salsola soda" has also been studied as a "biodesalinating companion plant" for crops such as tomatoes and peppers when they are grown in saline soils. [Colla, G., Rouphael, Y., Fallovo, C., and Cardarelli, M. (2006). "Use of "Salsola soda" as a companion plant to improve greenhouse pepper ("Capsicum annuum") performance under saline conditions," "New Zealand Journal of Crop and Horticultural Science", Vol. 34: 283 - 290. Online abstract at http://www.rsnz.org/publish/nzjchs/2006/039.php (retrieved , ).] The "Salsola soda" extracts enough sodium from the soil to improve the growth of the crop plant, and better crop yields result despite the competition of the two plants for the remaining minerals from the soil.