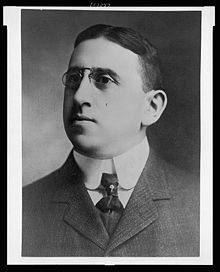 Martin Beck was born on 31 July, 1868 at Liptovský Mikuláš, a town in northern Slovakia that at the time of his birth was ruled by the Austro-Hungarian Empire. Beck secured passage with a troupe of actors on the SS Elbe and set sail from Bremen, Germany to America in May of 1884 . There he worked as a waiter in a Chicago beer garden, then went to San Francisco with the Schiller Vaudeville Company in the late 1880s. Beck became friends with the owner of the Orpheum Theatre in San Francisco, and when it was bought by Morris Meyerfeld Jr. in 1899, he helped Morris expand by acquiring other theaters. By 1905, Beck was running the organization, which extended from Chicago to San Francisco. [1][2]

In 1910 he formed for the Orpheum, the United Booking Offices, Kohl and Castle and others the Beck-Butt Circuit linking America and Europe, joining forces with Alfred Butt, of the Palace in London and Alhambra in Glasgow, founder chairman of the Variety Theatre Controlling Company in Britain thus creating a booking organisation to engage performers who would have three years without playing the same theater twice. They also opened a vaudeville theater in Berlin in 1914 as part of this international agreement but new theaters in other capitals were shelved because of the outbreak of war. Beck had become a Naturalized American citizen in October, 1889 at a swearing in ceremony held in San Francisco. [3]

In the spring of 1899, twenty-five-year-old Harry Houdini met Beck at a beer hall in St. Paul, Minnesota where Houdini was performing. Beck telegraphed Houdini from Chicago: "You can open Omaha March twenty sixth sixty dollars, will see act probably make you proposition for all next season." Houdini wrote at the bottom of telegram, "This wire changed my whole Life's journey."

He built the Palace Theatre in 1913. Sarah Bernhardt's performance here may be credited with the early success of this theatre.

He was voted out of the presidency of Orpheum Circuit, Inc. after it went public in 1923. Martin then opened the Martin Beck Theater in 1924.

He returned to vaudeville in 1932, running the booking office at RKO, and in 1934 brought the D'Oyly Carte Opera Company of London to America for the first time.

He died at Mount Sinai Hospital in Manhattan on November 16, 1940.