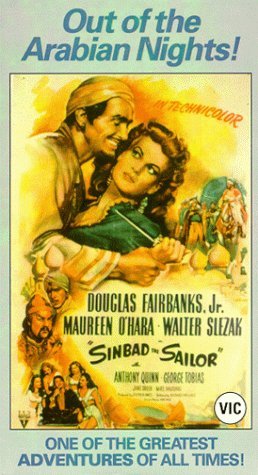 "Sinbad the Sailor" is a 1947 starring , , , and . It tells the tale of the "eighth" voyage of Sinbad, wherein he discovers the lost treasure of .

::"O Masters, O Noble Persons, O Brothers, know you that in the time of the Caliph Harun-Al-Rashid, there lived on the golden shore of Persia a man of adventure called Sinbad the Sailor. Strange and wondrous were the tales told of him and his voyages. But who, shall we surmise, gave him his immortality? Who, more than all other sons of Allah, spread glory to the name of Sinbad? Who else, O Brother, but - Sinbad the Sailor! Know me, O Brothers, for the truth of my words, and by the ears of the Prophet, every word I have spoken is truth!":::- from the opening title card

The story begins with Sinbad () regaling a group of travelers around a night-time campfire. When his listeners become bored with his often repeated tales, Sinbad tells them about his "eighth" voyage.

With his friend, Abbu (), Sinbad salvages a ship whose crew has been poisoned. On board, he finds a map to the lost treasure of on the fabled island of Deryabar. However, when he sails to Basra, the ship is confiscated by the local , to be sold at auction. Sinbad obtains an agreement that he may keep the ship if there are no bids. He scares away all the bidders with not-so-subtle comments about the ship being cursed. At the last moment, one bidder appears, a veiled woman borne by four servants. She is Shireen (O'Hara), part of the harem of the powerful Emir of Daibul (). Sinbad bids against her and ends up owing a huge sum he cannot pay. He steals the auctioneer's own money to pay for the ship.

Visiting Shireen that night in her garden, Sinbad learns of a mysterious and deadly person known as Jamel (), who will stop at nothing to acquire the treasure. Jamel, only vaguely seen behind a curtain, makes an attempt on Sinbad's life. Sinbad escapes and steals the ship, acquiring a rough crew to man it. Strange stories of the evil Jamel circulate among the crew, but no one alive has ever seen him.

After several days, Sinbad sails to another port and goes, risking death, to visit Shireen in the harem. He is captured, but because the Emir believes him to be the Prince of Deryabar, he becomes his "guest". With his smooth words and some trickery, Sinbad once again escapes, taking Shireen with him. They set sail for Daryabar, but are overtaken and captured by the Emir. It is then revealed that Sinbad's ship's barber is none other than Jamel, who has memorized (and then destroyed) the map to Deryabar. Forming an uneasy alliance of convenience, they sail to the treasure island.

They convince the lone resident of the ruins of Alexander's palace, the aged Aga (), that Sinbad is his lost son, owing to a medallion Sinbad had since childhood. When the Emir threatens to kill Sinbad, Sinbad confesses his true identity. Nevertheless, Aga capitulates and shows them the fabulous treasure's hiding place. He later informs Sinbad that he had given his son to sailors to shield him from treasure hunters; Sinbad is indeed his son and the true Prince of Daryabar.

When it is discovered that Jamel had intended to poison the Emir and his crew to have the treasure for himself, the Emir forces him to drink the deadly liquid himself. Sinbad escapes again, boards the Emir's ship and frees his crew. The Emir is killed by catapulted at him from his own ship.

The disbelieving listeners around the campfire accuse Sinbad of telling yet another tall tale, but soon change their minds when he distributes precious jewels and gold. The beautiful Shireen appears and they board the ship for their return to Deryabar.