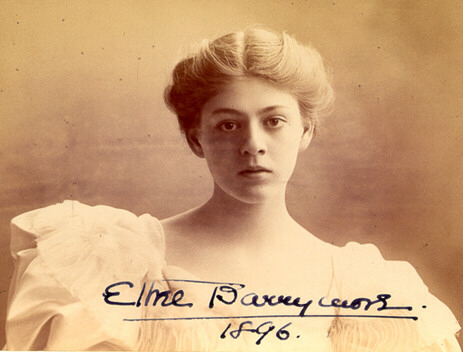 Ethel Barrymore (, – , ) was an Academy Award-winning American actress and a member of the famous .

Ethel Barrymore was born Ethel Mae Blythe in , the second child of the actors and . She spent her childhood in Philadelphia, and attended schools there.

She was the sister of actors and , the aunt of actor , and the great-aunt of actress . She was also the niece of Broadway matinée idol and early movie star Sidney Drew.

Ethel Barrymore was a highly regarded stage actress in and a major Broadway performer. Many today consider her to be the greatest actress of her generation.

Her first appearance in Broadway was in 1895, in a play called "The Imprudent Young Couple" which starred her uncle and . She appeared with Drew and Adams again in 1896 in "Rosemary". She portrayed Nora in "" by Ibsen (1905), and Juliet in "" by Shakespeare (1922).She was also a strong supporter of the and had a high-profile role in the 1919 strike. In 1926, she scored one of her greatest successes as the sophisticated spouse of a philandering husband in 's comedy, "". In July 1934 she starred in the play "Laura Garnett", by Leslie and , at , New York State.

Barrymore was a baseball and boxing fan. Her admiration for boxing ended when she witnessed as a spectator the brutality of the , Dempsey/Willard fight in which Dempsey broke Willard's jaw and knocked out several of his teeth. Ethel vowed never to attend another boxing match.

She made her first motion picture in 1914 and in the 1940s, she moved to and started working in motion pictures. The only two films that featured all three siblings, Ethel, John and Lionel Barrymore, were "National Red Cross Pageant" (1917) and "" (1932).

She won the Oscar for for her role in the 1944 film "None but the Lonely Heart" opposite , but made plain that she was not overly impressed by it. On , her Oscar was offered for sale on .

Ethel Barrymore died of cardiovascular disease in 1959, at her home in , after having lived for many years with a heart condition. She was two months shy of her 80th birthday. She is interred in the . The Ethel Barrymore Theatre in is named after her.