Pietroasele is a commune in Buzău County, Romania, known for its vineyards. The name means "the rockies". The commune is composed of six villages: Câlţeşti, Clondiru de Sus, Dara, Pietroasa Mică, Pietroasele and Şarânga.

Ruins of a third-fourth century AD Roman castra and thermae were discovered in the area in the 1980s.

Ruins of the Roman thermae at Pietroasele near county road 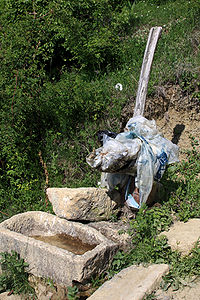 The Roman fort of Pietroasa de Jos, well beyond the Danubian Limes and near present-day Moldavia, would seem to have been occupied in the fourth century A.D.

It was connected to bridge-head forts (Sucidava[1], Barboşi, and the unlocated Constantiniana Daphne) along the left bank of the Danube river.

Near this Roman fort, built by Constantine I when he created the Constantine Wall of the Limes Moesiae probably around 330 AD, researchers have found even a small thermae building in the 1980s.[2]

The Roman fortification (124 m x 158 m) was built in an area where was present the Culture of Pietroasa.[3]. The wall was 2.7 meters thick. There were discovered some stamped briks of legio XI Claudia Pia Fidelis from Durostorum, specific to Traian ages.Bricks stamps with LEG XI CL ANT and LEG XI CPF.[4] Nowadays there is a small museum on the former site of the castrum.

The nearly 4000 people living in Pietroasele live mainly of agriculture and farming, but a few are employed in tourism related to the Roman discoveries and museum.

The Pietroasele treasure, an Ostrogothic hoard uncovered in 1837 by local villagers, is on display at the National Museum of Romanian History, in Bucharest.

The original gold hoard, discovered within a large ring barrow known as "Istriţa hill" near Pietroasele, is a late fourth-century Gothic treasure that included some twenty-two objects of gold, among the most famous examples of the polychrome style of Migration Period art. The total weight of the find was approximately 20 kilograms (44 lb). 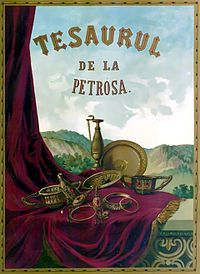 Of the twenty-two pieces, only twelve have survived, conserved at the National Museum of Romanian History, in Bucharest: a large eagle-headed fibula and three smaller ones encrusted with semi-precious stones; a patera, or round sacrificial dish, modelled with Orphic figures [5] surrounding a seated three-dimensional goddess in the center; a twelve-sided cup, a ring with a Gothic runic inscription, a large tray, two other necklaces and a pitcher.