The term Continuing Anglican movement refers to a number of churches in various countries that have been formed outside of the Anglican Communion. These churches generally believe that "traditional" forms of Anglican faith and worship have been unacceptably revised or abandoned within some Anglican Communion churches in recent decades. They claim, therefore, that they are "continuing" the traditional forms of Anglicanism. The modern Continuing movement principally dates to the Congress of St. Louis in the United States in 1977, at which participants rejected changes that had been made in the Episcopal Church's Book of Common Prayer and the ordination of women. More recent changes in the North American churches of the Anglican Communion, such as the ordination of gay and lesbian people to the priesthood and episcopate, have created further separations.

Relations with the Anglican Communion

Continuing churches have generally been formed by clergy and lay people who left churches belonging to the Anglican Communion. These particular Anglican Communion churches are charged by the Continuing movement with being greatly compromised by adopting what they consider to be secular cultural standards and liberal approaches to theology.[1] Many Continuing Anglicans believe that the faith of some churches in communion with the Archbishop of Canterbury has become either unorthodox or un-Christian and therefore have not sought to also be in communion with them.[2][3] Although the term Anglican usually refers to those churches in communion with the Church of England and the Archbishop of Canterbury, many Continuing churches, particularly those in the United States, use the term Anglican to differentiate themselves from the Episcopal Church. Many continuing Anglicans feel that they are remaining true to historic Anglican tradition and Biblical Christianity and that it is the Episcopal Church in the United States, as well as other parts of the Anglican Communion, which have become unorthodox.[4]

Anglicanism in general has always sought a balance between the emphases of Catholicism and Protestantism, while tolerating a range of expressions of evangelicalism and ceremony. Clergy and laity from all Anglican churchmanship traditions have been active in the formation of the Continuing movement.

While there are high church, broad church, and low church Continuing Anglicans, many Continuing churches are Anglo-Catholic with highly ceremonial liturgical practices. Others belong to a more Evangelical or low church tradition, support the Thirty-nine Articles, and observe Morning Prayer more frequently than Holy Communion.

Most Continuing churches in the United States reject the 1979 revision of the Book of Common Prayer by the Episcopal Church and use the 1928 version or prior official versions of the Book of Common Prayer for their services instead. In addition, some Anglo-Catholic bodies also use the Anglican Missal or English Missal in celebrating the Eucharist.

Liturgical use of the 1611 "Authorized Version" of Holy Scripture (more widely known as the King James Version) is also a common feature. This is done for many reasons, not the least of which are aesthetics, and in protest against what some claim to be liberal or progressive theology that updated English translations such as the New Revised Standard Version are believed to embody.[5]

The movement originated in the Episcopal Church in the United States of America and the Anglican Church of Canada. Related churches in other countries, such as the Anglican Catholic Church in Australia and the Church of England (Continuing), were founded later.

In 1976, the General Convention of the Episcopal Church in the United States of America voted to approve the ordination of women to the priesthood and to the episcopate and also provisionally adopted a new and doctrinally controversial Book of Common Prayer, later called the 1979 version. During the following year, 1977, several thousand dissenting clergy and laypersons responded to those actions by meeting in St. Louis, Missouri under the auspices of the Fellowship of Concerned Churchmen[6] and adopted a theological statement, the Affirmation of St. Louis.[7] The Affirmation expressed a determination "to continue in the Catholic Faith, Apostolic Order, Orthodox Worship and Evangelical Witness of the traditional Anglican Church, doing all things necessary for the continuance of the same."

Out of this meeting came a new church with the provisional name of the "Anglican Church in North America (Episcopal)". The first bishop of the new church, the Right Reverend Charles Doren, was consecrated by a retired bishop of the Episcopal Church, the Right Reverend Albert Arthur Chambers of the Diocese of Springfield, Illinois, along with Bishop Francisco Pagtakhan of the Philippine Independent Church as co-consecrator.

Although expected to be the third bishop participating in Doren's consecration, the Right Reverend Mark Pae of the Anglican Church of Korea sent a letter of consent instead. This development left the new group open to charges of violating the customs of apostolic succession, in which three bishops customarily are present, although only one is necessary for a valid consecration.

The newly-consecrated Bishop Doren then joined with Bishops Chambers and Pagtakhan in consecrating as bishops the Reverend James Mote, the Reverend Robert Morse, and the Reverend Francis Watterson. Bishop Watterson left the movement shortly afterward and became a Roman Catholic priest.

The original generation of Continuing parishes in the U.S. were found mainly in metropolitan areas. Since the late 1990s, a number have appeared in smaller communities, often as a result of a division in the town's existing Episcopal parish(es) or mission(s). The 2007/08 Directory of Traditional Anglican and Episcopal Parishes, published by The Fellowship of Concerned Churchmen,[8] contained information on over 900 parishes affiliated with either the Continuing Anglican churches or the Anglican realignment movement.

The principles of the Affirmation of St. Louis and, to a lesser extent, the Thirty-nine Articles of Religion, provide some basis for unity in the movement, but the jurisdictions are numerous, usually quite small in membership and often splinter and recombine. Reports put the number of jurisdictions at somewhere between 20 and 40, mostly in North America, but fewer than a dozen of the churches popularly called "Continuing churches" can be traced back to the meeting in St. Louis. 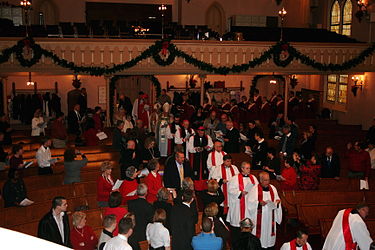 Processional of clergy from three Continuing Anglican churches, the Anglican Catholic Church, the Anglican Province of Christ the King and the United Episcopal Church of North America.

In 2007, various jurisdictions made attempts at overcoming the movement's divisions. The Anglican Catholic Church, the Anglican Province of Christ the King, and the United Episcopal Church of North America entered into discussions about possible organic unity. A Communion Agreement was entered into on May 17, 2007.[9] In January 2009 one bishop from each jurisdiction consecrated three suffragan bishops in St. Louis, intending that they serve all three jurisdictions.

Another regional association facilitating increased dialogue and fellowship opportunities is Common Cause Appalachia, to which some continuing Anglican churches in Georgia, Kentucky, North Carolina and Tennessee belong.[10]

In 2007, one Continuing Anglican church body, the Traditional Anglican Communion (TAC), made a formal proposal to the Roman Catholic Church for admission into "full corporate and sacramental union" with that church in a manner that would permit the retention of some of its Anglican heritage.[11] The Vatican announced, on July 5, 2008, that it was giving serious consideration to appeals received from various Anglican groups seeking union with itself, observing that "the situation within the Anglican Communion in general has become markedly more complex".[12] On October 29, 2009, the Congregation for the Doctrine of the Faith announced Pope Benedict XVI's intention to create a new type of ecclesiastical structure,[13] called a "personal ordinariate", for groups of Anglicans entering into full communion with the see of Rome.[14]

On November 4, 2009, Pope Benedict signed an apostolic constitution, Anglicanorum Coetibus. The House of Bishops of the Anglican Church in America — the American Province of the TAC — responded on March 3, 2010, voting unanimously to request acceptance under the personal ordinariate provision.[15][16] Within months, however, three ACA bishops made known their opposition to the move.[17]

Other Anglican bodies not in communion with the Archbishop of Canterbury include the Church of England in South Africa; the Reformed Episcopal Church in the United States, which was formed in 1873 in opposition to the advance of Anglo-Catholicism in the Episcopal Church; the Free Church of England, which was founded in England in 1844 for similar reasons; the Anglican Orthodox Church, another Low Church body that was founded in 1963, and the Orthodox Anglican Communion founded by the AOC in 1967. These churches are not universally considered to be Continuing Anglican churches because they were founded prior to the beginning of the Continuing Anglican movement of the 1970s; however, they relate to the Continuing churches on a number of levels and have similarities in beliefs and practices.

The following is a list of North American church bodies commonly called "Continuing Anglican," with the approximate number of their parishes in North America shown in parentheses. Some also have affiliated churches in other countries.

The following seminaries are associated with the Continuing Anglican movement: