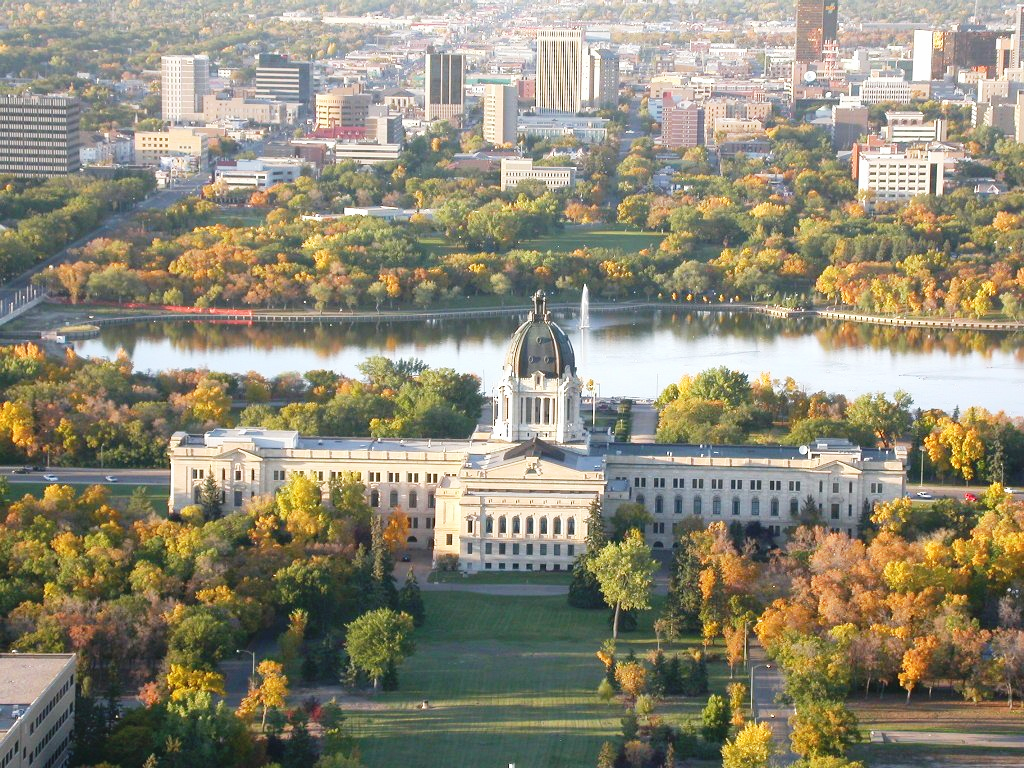 The Saskatchewan Legislative Building was built between 1908 and 1912 in the Beaux Arts style to a design by Edward and of . The Maxwells also supervised construction of the building by the Montreal firm of P. Lyall & Sons, who later built the Centre Block of the federal Parliament Building in after the 1866 Parliament Building was destroyed by fire in 1916. Piles began to be drilled for the foundations in the fall of 1908 and in 1909 the Governor General, Earl Grey, laid the cornerstone.

The design contemplates expansion of the building by the addition of wings extending south from the east and west ends and coming together to form a courtyard. The plans originally called for the exterior of the building to be red brick but after construction had begun and red bricks were already on the site, Premier Walter Scott decided that Manitoba Tyndall stone would give the building greater grandeur and the plans were adjusted with the substitution increasing the building cost by $50,000. The total cost of construction came to $1.75 million by the time of its opening in October 1912, ten months after the assembly had begun meeting in the yet-uncompleted building.

Walter Scott anticipated that the building might "for a century yet be credible enough to form the main building on the Capital grounds" (Barnhart: 2002, 43), the general assumption of the time being that Saskatchewan's population would quickly grow to several million. That century has now almost elapsed; the provincial legislative building remains the main building on the "Capital grounds," but indeed, continues to be the most imposing structure in the considerably smaller city than its founders envisioned.

Such planning is also evident in the legislative chamber itself, designed to accomodate well in excess of one hundred members. The actual size of the assembly has never been expanded beyond 66 MLA's (and has been fixed at 58 members since 1995). As a result, even after those elections which yielded massive majorities (such as those held in 1982 and 1991) there has been plenty of space to seat all government members to the speaker's right as opposed to having some sit on the opposite side.

The Saskatchewan Legislative Building is located at 2405 Legislative Drive, Regina, overlooking . Free tours of the facility are offered throughout the week.

Of historical significance, the table that was used during the meeting of the Fathers of Confederation in Quebec City in 1864 resides in the building's library, albeit with six feet of it removed. The Lieutenant-Governor of the brought the table to Regina, which was the capital of the territory at the time. Six feet of the table length was removed from the middle so that it could be stored.

* [http://scaa.usask.ca/gallery/regina/south/legislative.html Drawings of unsuccessful designs in the 1907 competition for the commission to plan the Legislative Building]
* [http://www.historicplaces.ca/rep-reg/affichage-display_e.aspx?Id=3764 Canadian Registry of Historic Places]