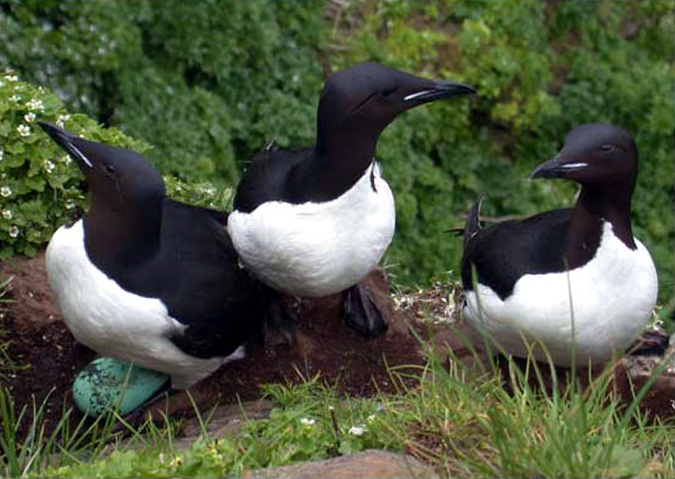 The Thick-billed or Brünnich's ("Uria lomvia") is a in the family (Alcidae). This bird is named after the Danish zoologist . The very deeply black "Uria lomvia arra" is also called Pallas' Murre after its describer.

It breeds on coasts and islands in the High of , and , where it is one of the most numerous bird .

At 40-44 cm in length, with a 64-75 cm wingspan, very similar in size to the closely related (or Common Murre, "U. aalge"). The Pacific race ("U.l.arra") is larger than the Atlantic race, especially in bill dimensions

Adult birds are black on the head, neck, back and wings with white underparts. The bill is long and pointed. They have a small rounded black tail. The lower face becomes white in winter. This species produces a variety of harsh cackling calls at the breeding colonies, but is silent at sea.

They differ from the Common Murre in their thicker, shorter bill with white gape stripe and their darker head and back; the "bridled" morph is unknown in "U. lomvia" - a murre has either a white eye-stripe, or a white bill-stripe, or neither, but never both; it may be that this is , enabling individual birds to recognize s at a distance in the densely-packed breeding colonies as the bridled morph is most common by far in North Atlantic colonies where both species of guillemots breed. In winter, there is less white on the Thick-billed Murre's face. They look shorter than the Common Murre in flight. First year birds have smaller bills than adults and the white line on the bill is often obscure, making the bill an unreliable way to identify them at this age. The head pattern is the best way to distinguish first-year birds from Common Murres

Brünnich's Guillemot is a rare vagrant in European countries south of the breeding range. In Britain, over 30 individuals have been recorded, but over half of these were tideline corpses. Of those that were seen alive, only three have remained long enough to be seen by large numbers of observers. All three were in - winter individuals in February 1987 and November/December 2005, and a bird in a auk colony in summer 1989. The 1989 and 2005 birds were both found by the same observer, Martin Heubeck.

The species has been recorded once in , [cite journal |last=Mullarney |first=Killian |title=Brünnich's Guillemot in County Wexford - an addition to the Irish list |journal=Irish Birds |volume=3 |pages=601–605 |year=1988] and has also been recorded in the . In the western Atlantic, they may range as far as , and in the Pacific to . Before 1950 large numbers appeared on the North American Great Lakes in early winter, passing up the St. Lawrence River from the East coast. Such irruptions have not been seen since 1952 [Gaston (1988)] .

These birds breed in large colonies on coastal cliffs, their single egg being laid directly on a cliff ledge. A description of the species breeding biology is given in detail by Gaston and Nettleship (1981)

The Thick-billed Murre's flight is strong and direct, and they have fast wing beats due to the short wings. These birds forage for food like other auks, by using their wings to swim underwater. They are accomplished divers, reaching depths of up to 150 m and diving for up to four minutes at a time; usually however birds make either shallow short dives or dive down to 21-40 m for longer periods

The diving depths and durations regularly achieved by these birds indicate that they, and similar auks, have some - as yet unknown - mechanism to avoid and when surfacing.

Egg harvesting and hunting of adult birds are important threats in Greenland where populations fell steeply between the 1960s and 1980s [Evans and Kampp (1991)] . In the Barent Sea the species has declined locally due to influences associated with polar stations in Russia. Fisheries may be a threat, but because Thick-billed Murres are better able to utilise alternative food sources the effect of over-fishing is not as severe as on the Common Murre. Pollution from oil at sea exerts a serious threat on the other hand; murres are among the seabirds most sensitive to oil contamination [Wiese "et al." (2003)] . Incidental mortality in fishing gear is also important. [Bakken & Pokrovskaya (2000)]

* [http://www.bionyt.dk/Groenland-debat.html Review] of discussion about recent hunting regulations on Greenland. In Danish and English.