Assumption of the Virgin (Correggio)

Assumption of the Virgin (Correggio) 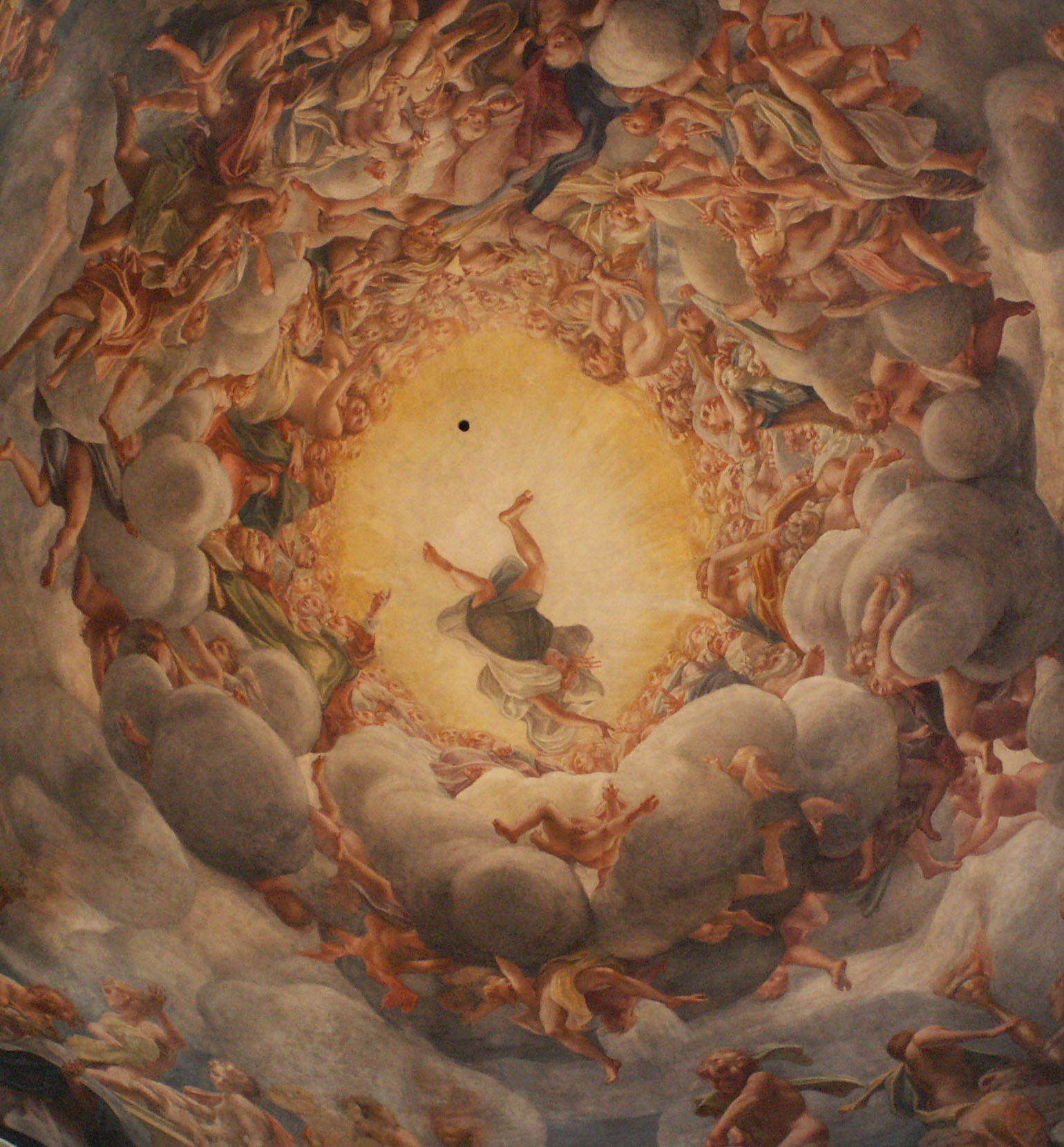 title=Assumption of the Virgin
artist=Antonio da Correggio
year=1526-1530
type=Fresco
height=1093
width=1195
museum=Cathedral of Parma__NOTOC__"The Assumption of the Virgin" (-) is a highly influential fresco by the Italian Late Renaissance artist . It decorates the dome of the , and it is influenced by Melozzo's perspective.

This famous fresco portrays the to Heaven. The contract was signed by on , .

The dome decoration includes the decoration of the dome base, which represents the four protector saints of : with the lamb, with a yellow mantle, St. Thomas [More likely to be Saint Joseph carrying a staff according to David Ekserdjian, in "Correggio in Parma Cathedral: Not Thomas but Joseph", "The Burlington Magazine "(1986); pp. 412+414-415.] by with an angel carrying the martyrdom palm leave, and , the sole figure looking upwards.

Below the feet of Jesus, the uncorrupt Virgin in red and blue robes is lofted upward by a team of angels. Ringing the base of the dome, between the windows stand the perplexed apostles, as if ringing her empty tomb. The innumerable angels (who sing or play several musical instruments) are a vortex upward. In the group of blessed can be seen: , with the head of . At the centre of the dome is a foreshortened beardless descending to meet his mother.

This fresco (a painting in plaster with water-soluble pigments) would serve as a catalyst for the style of dramatically illusionistic ceiling painting. The entire architectural surface is treated as a single pictorial unit of vast proportions, equating the dome of the church with the vault of heaven. The realistic way the figures in the clouds seem to protrude into the spectators' space is an audacious and astounding use for the time of foreshortening.

This fresco inspired for his fresco "Assumption of the Virgin", in the cathedral church of .

* [http://www.wga.hu/index1.html Frescoes in Parma by Correggio]
* [http://www.cattedrale.parma.it/page.asp?IDData=15845&IDCategoria=500&IDSezione=2379 Chronology of the Cathedral of Parma (in Italian)]
* [http://easyweb.easynet.co.uk/giorgio.vasari/corregg/correg.htm Page with several details of the dome frescoes]