Cripplegate was a city gate in the London Wall and a name for the region of the City of London outside the gate. The area was almost entirely destroyed by bombing in World War II and today is the site of the Barbican Estate and Barbican Centre. The name is preserved in the church of St Giles-without-Cripplegate, and in the Cripplegate ward of the City, while a street named Cripplegate lies slightly to the north of the site of the Wall.

The ward straddles the (now former) line of the Wall and the old gate and is often (even today[1]) divided into "Within" and "Without" parts, with a Beadle and a Deputy (Alderman) appointed for each part. Since the 1994 (City) and 2003 (ward) boundary changes, most of the ward is Without, with the ward of Bassishaw having expanded considerably into the Within area. 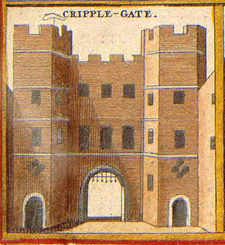 An old illustration of the gate circa 1650

Cripplegate stood at the northern end of what is now Wood Street at the junction of St Alphage Gardens. It was already in place when the city wall was built, as it was the northern gate of a Roman fort which was built in 120 AD. The northern and western walls formed part of the new wall, although these defences were completely rebuilt in early medieval times. Like a number of its sister gates, it was used as a prison for part of its life, being leased for accommodation at other times.

The gate gave access to a substantial medieval suburb and to the village of Islington. Extra defensive works on the northern site outside the gate gave rise to the name 'barbican' (or outer fortification of the City), which was then taken as the name for the post World War II rebuilding of the area. It originally only led into the fort and became a gate into the City when the fort was demolished.

In 1244 it was rebuilt by the Brewers Company, and then rebuilt again in 1491, had alterations in 1663 and when it was finally demolished in 1760 so that the street could be widened. The materials were sold to a local carpenter for £91.

In 1555, Sir John Gresham endowed the new Gresham's School in Norfolk with three tenements in the parish of St Giles Without, Cripplegate, including 'The White Hind' and 'The Peacock'.[2]

During World War II the Cripplegate area was virtually demolished and by 1951 the resident population of the City stood at only 5,324 of whom 48 lived in Cripplegate. Discussions began in 1952 about the future of the site, and the decision to build new residential properties was taken by the Court of Common Council on 19 September 1957. The area was reopened as the Barbican Estate in 1969. Cripplegate is today the most populous of the four residential wards of the City.

The name of the gate has obscure origins. It could be that it is so-called because of the cripples who used to beg there, although this is unsubstantiated. The body of St Edmund the Martyr was said to have been carried through it in 1010 on its way from Bury St Edmunds to St Gregory's church to save it from the Danes. Lydgate, a monk of Bury, claimed that the body cured many lame peasants as it passed through the gate. Alternatively 'Cripplegate' could be from the Anglo-Saxon term crepel, meaning a covered way or underground passage. The gate is mentioned in the fourth law code of Ethelred the Unready and a charter of William the Conqueror of 1068. In both these documents the spelling used is 'Crepelgate' ('Saxon London', by Alan Vince, 1990, p43).

The second wedding in Four Weddings and a Funeral takes place in the fictional church of St Mary-in-the-Fields, Cripplegate, EC2 (sic).

It was filmed in the Royal Naval College Chapel in Greenwich.[3]