Decolonization of the Americas

Decolonization of the Americas

Peaceful independence by voluntary withdrawal of colonial powers then became the norm in the second half of the 20th century. However, there are still many British and Dutch colonies in North America (mostly Caribbean islands), as well as the United States' possessions of Puerto Rico and the US Virgin Islands; the French Republic has fully "integrated" most of its former colonies as fully constituent "departments" of France.

The first independent sovereign country in the Americas was New Hampshire, which declared its independence from Great Britain with a new written state Constitution on January 5, 1776, and was one of the thirteen states that founded the United States of America six months later with the Declaration of Independence.

The United States declared independence from Britain on July 4, 1776 (comprised at the time of twelve British colonies and the independent state of New Hampshire, which had been a British colony six months prior), which was recognized with the Treaty of Paris in 1783. 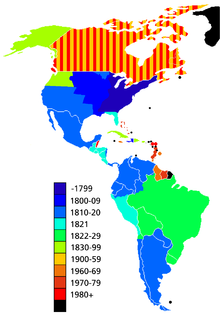 Countries in the Americas by date of independence. Note that the United States did not complete its continental territorial expansion until 1867.

The Spanish colonies in America won their independence in the first quarter of the 19th century. During the Peninsula War, several assemblies were established after 1810 by the Criollos to rule the lands in the name of Ferdinand VII of Spain. This experience of self-government, along with the influence of Liberalism and the ideas of the French and American Revolutions, brought about a struggle for independence, led by the Libertadores. The colonies freed themselves, often with help from the British Empire, which aimed to achieve political influence and trade without the Spanish monopoly.

In South America, Simón Bolívar and José de San Martín led the final phase of the independence struggle. Although Bolívar attempted to keep the Spanish-speaking parts of the continent politically unified, they rapidly became independent of one another as well, and several further wars were fought, such as the War of the Triple Alliance and the War of the Pacific.

A related process took place in Spain's North and Central American colonies with the Mexican War of Independence and related struggles. Independence was achieved in 1821 by a coalition uniting under Agustín de Iturbide and the Army of the Three Guarantees. Unity was maintained for a short period under the First Mexican Empire, but within a decade the region had also split into various nations.

Unlike the Spanish, the Portuguese did not divide their colonial territory in America. The captaincies they created were subdued to a centralized administration in Salvador which reported directly to the Crown in Lisbon. Therefore, it is not common to refer to "Portuguese America" (like Spanish America, Dutch America, etc.), but rather to Brazil, as a unified colony since its very beginnings.

As a result, Brazil did not split into several states by the time of Independence (1822), as happened to its Spanish-speaking neighbors. The adoption of monarchy instead of federal republic in the first six decades of Brazilian political sovereignty also contributed to the nation's unity.

In the Portuguese colony Dom Pedro I (also Pedro IV of Portugal), son of the Portuguese king Dom João VI, proclaimed the country's independence in 1822 and became Brazil's first Emperor. This was generally peacefully accepted by the crown in Portugal, although some guerrillas were fought between Portuguese troops and civilians. Portugal recognized Brazil's independence 3 years later upon compensation.

On July 1, 1867, Canada became a dominion within the British empire. At this point the Dominion of Canada included Upper and Lower Canada (southern Ontario and Quebec, respectively), Nova Scotia, and New Brunswick. The British colonies of British Columbia (1871), Prince Edward Island (1873), and Newfoundland (1949, following World War II) would eventually join Confederation. Britain also ceded control of Rupert's Land and the North-Western Territory (1870), and the Arctic Islands (1880) to Canada. The Canadian government acquired the Sverdrup Islands in the Arctic region from Norway in 1931 after the previous owner nation had them for two decades in part of polar explorer Roald Amundsen's claim to the North Pole for the Norwegian flag in 1908/09. This level of independence was achieved completely by political means through negotiations between the governments of the British North American colonies (Charlottetown Conference and Quebec Conference). There had been two attempts at achieving Canadian independence by armed force in both Upper and Lower Canada during 1837-1838 (The Rebellion of 1837) however both were put down by British authorities. Delaying the transfer of Rupert's Land to Canada was the Red River Rebellion in 1869, which sought independence and self-government but was put down by the new Canadian government, leading to the creation of the Royal North-West Mountain Police. The same region also fought for independence again in 1885 in the North-West Rebellion but the insurgency was met with armed force by Canadian troops and the RNWMP. In British Columbia, unceded territories of various native peoples remain in dispute, with numerous native governments refusing to recognize Canadian sovereignty since the province joined Confederation. The only formally-treated areas of British Columbia are a small group of treaties near Victoria, the lands of the Nisga'a Nation flanking the Nass River, and the Treaty 8 lands in the province's northeast.

Newfoundland was also given Dominion status on September 26, 1907, although as noted above, this was superseded when it joined the Confederation in 1949.

From 1867 until 1931, Britain maintained control of foreign policy. The Treaty of Westminster transferred that control to Canada. Formal permission of the British Parliament, however, was required for some amendments to Canada's basic law, the British North America Act, 1867. With the passing of the Canada Act 1982, this last formal legislative link with the mother country was severed, and Canada assumed total independence from H.M. Government in London.

In 1898, the United States won the Spanish-American War and occupied Cuba and Puerto Rico, ending Spanish territorial control in the Americas. Still, the early 20th century saw a stream of immigration of poor people and political exiles from Spain to the former colonies, especially Cuba, Mexico and Argentina. After the 1970s, the flow was inverted. In the 1990s, Spanish companies like Repsol and Telefónica invested in South America, often buying privatized companies.

Other countries did not gain independence until the 20th century:

Some parts of the Americas are still administered by European countries:

The remaining non-sovereign territories of the Americas have generally retained this status by choice, and enjoy a significant degree of self-government. (Some have nevertheless been placed on the U.N. list of Non-Self-Governing Territories, an ongoing subject of controversy.) Aruba, for example, seceded from the Netherlands Antilles on January 1, 1986, and became a separate, self-governing member of the Kingdom of the Netherlands. Movement toward full independence by 1996 was halted at Aruba's request in 1990. French Guiana, Guadeloupe and Martinique are not considered colonies of France, but have been "incorporated" into France itself, as overseas départements (départements d'outre-mer, or DOM).