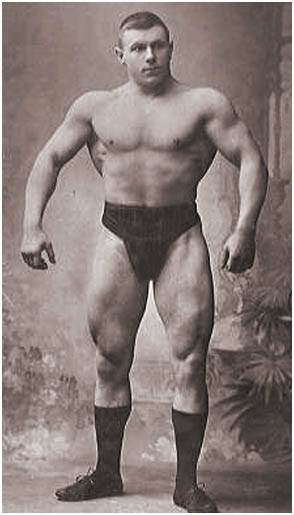 The first widely recognized World Heavyweight Champion in wrestling history, Hackenschmidt is believed to be the creator of the professional wrestling version of the as well as the originator of the hack squat, which is a squat-deadlift with arms behind the body.

Hackenschmidt held the title and remained undefeated until he squared off against on at 's Dexter Park Pavilion. Hackenschmidt was favored to win, but he submitted to Gotch after 2 grueling hours to an ankle lock submission; [ [http://www.wrestlingmuseum.com/pages/wrestlers/georgehackenschmidt2.html Professional Wrestling Online Museum - Ring Chronicle Hall of Fame Inductee - George Hackenschmidt ] ] It has been alleged that Gotch used illegal techniques in the match to defeat Hackenschmidt, which included oiling up his body, rubbing oil into Hack's eyes, scratching, gouging and hitting. At one time, Gotch also punched Hackenschmidt on the nose. [ [http://www.sandowplus.co.uk/Competition/Hackenschmidt/hack-biog.htm George Hackenschmidt - The Russian Lion - by David Gentle ] ]

In the 's "", it mentions Hackenschmidt complaining that had smothered himself in oil during their bouts, so that Hackenschmidt was unable to use the bearhug.

Hackenschmidt was also a pioneer in the field of weightlifting. He invented the exercise known as the hack squat, whose name is a reference to his own. Hackenschmidt also helped to popularize many other types of lifts common within the modern training regimen, such as the . During his career, he held numerous weightlifting records, all of which have since been broken.

Hackenschmidt went on to write several books, including "Fitness and Your Self" (1937), "Consciousness and Character: True Definitions of Entity, Individuality, Personality, Nonentity" (1937), "The Way To Live In Health and Physical Fitness" (1941), and "The Three Memories and Forgetfulness: What They Are and What Their True Significance is in Human Life".

Hackenschmidt died in in 1968. He was cremated at , where his memorial plaque records him as "George Hackenschmidt".Fact|date=February 2008