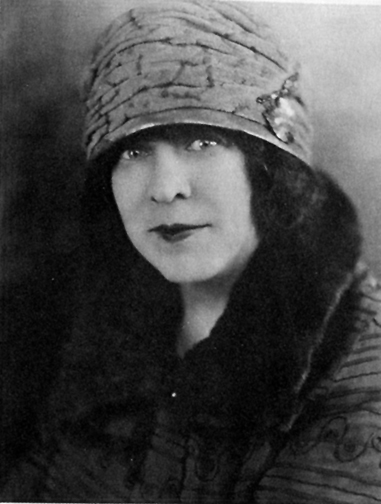 June Mathis ( – ) was one of the most influential American s and among the highest paid executives in the 1920s.

Born June Beulah Hughes in , , the only child of Virginia Ruth and Dr. Philip Hughes. Her parents divorced when she was seven and her mother remarried, this time to William D. Mathis, a widower with three children whose name she would eventually adopt as a stage name. She had been a sickly child and believed she healed herself through her sheer force of will. She believed everything was mental and everyone had certain vibrations stating, "If you are vibrating on the right plane, you will inevitably come in contact with the others who can help you. It's like tuning in on your radio. If you get the right wave-length, you have your station."Mathis was educated in and . It was while in San Francisco she got her first stage experience, dancing and doing imitations in . At the age of 12 she joined a traveling company and at 17 became an ingenue, performing with Ezra Kendall in "The Vinegar Buyer". Later she appeared in several Broadway shows and toured for four seasons with the in the widely popular show "The Fascinating Widow". Supporting her now twice widowed mother, she would continue to perform in theatre for the next 13 years.

Mathis was determined to become a screenwriter and with her mother in tow moved to New York City. She studied writing by day and went to the movies at night. She entered a screenwriting competition; but despite not winning, her entry was so impressive it did bring job offers. Her first script, "House of Tears", would be directed by Edwin Carewe in 1915 and led to a contract in 1918 with Metro studios, later known as MGM. As one of the first screenwriters to include details such as stage directions and physical settings in her work, Mathis saw scenarios as a way to make movies into more of an art form. Much of the present standard styles can be attributed to her. Mathis later credited her success to a strong concentration on plot and theme: "No story that did not possess a theme has ever really lived.... Occasionally one may make money and perhaps be popular for a time. But in the end it dies."

By 1919 Mathis and her mother had moved to Hollywood. After only a year of screenwriting, she had advanced to the head of Metro's scenario department.

During her early years she had a close association with silent star , however their films together can be said to be marked by oversentimentality. What little praise these films garned were due to Nazimova's acting rather the conventional romantic stories.

The Four Horsemen of the Apocalypse

"The Four Horsemen of the Apocalypse", groundbreaking on many levels, was one of the first films with an anti-war theme. Mathis also injected some early depictions of alternative lifestyles; it featured a scene with German officers coming down the stairs in drag. Of the scene, Mathis would later tell the "", "I had the German officers coming down the stairs with women's clothing on. To hundreds of people that meant no more than a masquerade party. To those who have lived and read, and who understand life, that scene stood out as one of the most terrific things in the picture."

"The Four Horsemen" was a smashing success grossing $4,500,000 domestically, thus becoming one of the most commercial silent films ever made and launching Valentino into stardom. Even before it was released, Valentino was receiving offers from other studios. Taking Mathis' advice, he remained with Metro to get another solid role or two under his belt.

Mathis and Valentino remained fast friends after "Four Horsemen". There was never a question about the nature of the relationship; the older plain-looking Mathis doted on the incredibly talented beautiful young man. Accounts state that Valentino regarded Mathis in a motherly way, calling her "Little Mother." , who worked with the pair on "Blood and Sand", said of them, "She mothered Rudy, and my dear she worshiped him and he worshiped her". "She discovered me, anything I have accomplished I owe to her, to her judgement, to her advice and to her unfailing patience and confidence in me", said Valentino on Mathis.

Mathis looked after Valentino's welfare during his time at Metro, making sure he got the best parts and was taken care of. When Valentino showed up on the set for "The Conquering Power", another Mathis script with Rex Ingram at the helm, his new-found stardom went to his head, along with resentment at working for the same wage of $350 a week. The friction between himself and Ingram, and his need for more money to support mounting debts led Valentino to sign with (later known as ) for $1,000 a week.

Mathis was also one of the people who helped bail Valentino out of jail when he was arrested for having married without finalizing his divorce to . Though the two were inseparable, their relationship became strained during Valentino's marriage to Rambova. When Mathis submitted a script for "The Hooded Falcon", one of Valentino's pet projects, the couple deemed it unacceptable and asked to have it rewritten. Mathis took it as a great insult and broke off all contact with Valentino.

Mathis' position with Metro was called by the "Los Angeles Times", "The Most Responsible Job ever Held by A Woman".

After spending seven years at Metro, Famous Players-Lasky was able to lure her away with the promise that she could continue to write for her protégé Valentino. When Valentino moved to she did as well, this time gaining sovereign control.

Mathis continued to survive in Hollywood despite being involved in two of the greatest fiasco's of the 1920s. When presented the studio with his masterpiece "Greed", following 's novel "" pretty closely, it was 42 reels and 10 hours long. Stroheim himself reduced it to 24 reels (6 hours), hoping the film could be screened with intermissions in two successive evenings. But the studio demanded further cuts. Stroheim allowed his close friend Rex Ingram to reduce it to 18 reels (4½ hours), but Mathis was instructed by Metro to cut the film even more, which she assigned to a routine cutter, Joseph W. Farnham. The film was then reduced to 13 reels (2½ hours) long.

For the 1924 production of "Ben Hur", Mathis fought the studio over the casting and production for many months. It was her idea to film the one million dollar script in Italy; the film would eventually come in just under four million dollars. When she arrived the original director , in his words, refused to let her "interfere". The production troubles were numerous, and due to political troubles engulfing Italy at the time, resulted in disputes and delayed permissions. When the sea battle was filmed near Livorno, Italy, many extras had apparently lied about being able to swim. The first attempt to film the chariot race was on a set in Rome, but there were problems with shadows and the racetrack surface. One of the chariots' wheels came apart and the stuntman driving it was thrown in the air and killed.

MGM inherited the production when it took over control of Goldwyn studios; with the film over budget and getting out of control, the studio halted production and relocated the shoot from Italy to California, under the supervision of . Before they had even returned from Italy, MGM would fire Mathis, Barbin and the star.

Mathis had been romantically linked to and Rex Ingram, however she returned from Italy engaged to an Italian cinematographer named 'Sylvano Balboni' (sometimes spelled as "Silvano" Balboni). The pair married at Mission of St. Cecilia, in . Upon her return, hired her as editorial director. She also scripted several successful pictures including "Sally", "The Desert Flower", and "Irene". After two years she left First National over limitations and signed with . With her husband she made one picture for them, "The Masked Woman". "The Magic Flame" (1927) would be her last picture, and one of her best, due in part to 's performance and 's direction.

After Valentino's marriage with Rambova ended in 1925, the two friends reconciled at the premiere of "Son of the Sheik" when Valentino spotted Mathis with friends. It was said to be a tearful reunion and the pair began to act as if old times. As Valentino began to feel ill in 1926 she was by his side and encouraged him to slow down and take some rest. True to her belief in the supernatural, Mathis reported seeing an apparition of Valentino in her living room the night he died. When Valentino unexpectedly died in August 1926 Mathis was said to offer this quote:

"My long association with Rudolph Valentino endeared him to me, as he has become endeared to everyone who knew him, my heart is too full of sorrow at this moment to enable me to speak coherently. I only know that his passing has left a void that nothing can ever fill in that the loss to our industry is too great to estimate at this time."

Due to estate issues Valentino was left without a burial place, so Mathis offered up what she thought would be a temporary solution; she lent him her spot in the family crypt which she had purchased in Hollywood Memorial Cemetery (now called the ). However, when Mathis herself died the following year, the arrangement became permanent.

On July 27, 1927, during the third act of the Broadway show "The Squall", while accompanied by her grandmother Mathis suffered a fatal heart attack. Her last words were reportedly "Oh Mother I'm dying!", which has led to confusion over who she was with at the time of her death as her mother had passed a few years prior. Mathis was 39 years old.

Her ashes were returned to California: instead of "evicting" Valentino, Mathis' husband, Sylvano Balboni, moved Valentino to the niche beside hers, sold the remaining crypt to Valentino's family and returned to Italy. Mathis and Valentino repose side by side to this day.