Morgan Territory is a region in California on the east side of Mount Diablo in the San Francisco East Bay's Contra Costa County. The area is named for settler Jeremiah Morgan (earliest published Munro 1882 and USGS 1898). 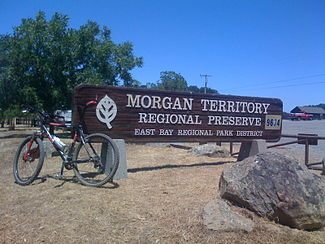 The “Territory” and “Road” were named for Jeremiah “Jerry” Morgan (1819-1906) and his descendants. Morgan hunted in the area in 1856 then moved there in 1857 "because the grizzly bear hunting was so good". Morgan had seventeen children. A one room school house and school district provided the first official name for the region (Munro-1882) which was later cemented by Morgan Territory Road. Morgan, however, called it the "Morning Side of the Mountain."

Jeremiah was born in the Cherokee Nation, Alabama, near the Tennessee River. He came to California in 1849, and claimed 10,000 acres (40 km²) of unsurveyed land on “the morning side of Mount Diablo” in 1856. After the official first survey by the U.S. government in 1862, Jeremiah's land claims were reduced to 2,000 acres (8 km²). Jeremiah had 17 children by his first wife, Sarah Ellis Morgan, who died in 1869 and his second, Louisa Riggs. ”Morgan Territory Road” was officially designated by Contra Costa County in 1892. The road is 14.5 miles (23.3 km) long and passes through four townships.

In 2004 Save Mount Diablo memorialized Jeremiah Morgan with a historic monument at its Morgan Red Corral property on Morgan Territory Road, with text prepared by Morgan Territory historian Anne Homan.

The 14.5-mile (23.3 km) Morgan Territory Road stretches from Manning Road north of Livermore to Marsh Creek Road east of Clayton, at times a single lane wide—for ten miles (16 km) there is no center line—and with no intersecting through roads. It began as a muddy wagon track linking ranches in the Black Hills and east of Mount Diablo. The northern slope of the road largely follows Marsh Creek. The northern part of the road was officially accepted by Contra Costa County in 1886 and designated “Morgan Road” in 1892.

After realignment the southern section was accepted by the County as a public highway in 1895. A short southern section in Alameda County was designated “Beck Road” in 1907 for John Beck, a nearby landowner, and for some years the through road south was known as Finley Road. The southern section rises from the 600’ contour to 2,063’ at the summit. A quarter mile section with a 14% grade is known as “the Levy” for early landowner Samuel Levy, who owned the adjoining property. A “summer road” until 1937, the southern road section was graveled from Manning to the Levy; locals called it the “Black Hills Road.” The northern section from the last creek bridge north was graveled in the 1930s. The road was paved in the 1950s. Bowerman (1944) shows the road as the “Livermore Road”, according to historian Annie Homan.

Morgan Territory Regional Preserve, called "Top of the World Park" by area historian and resident Anne Homan, and the surrounding region are named for pioneer settler Jeremiah Morgan. Established in 1976, the East Bay Regional Park District preserve's nearly 5,000 acres (20 km²) are an important wildlife and recreational corridor stretching east from Riggs Canyon and Mount Diablo State Park to the Contra Costa Water District's Los Vaqueros watershed and EBRPD's Round Valley Preserve. The original preserve was located on Morgan Territory Ridge, east of Morgan Territory Road, and including the headwaters of Marsh Creek, but was expanded in the late 1980s and afterwards across the parallel Highland Ridge west of the road and into Riggs Canyon.

Morgan Territory's sandstone hills include the headwaters of Marsh and Tassajara creeks, feature more than ninety species of wildflowers, and are home to mountain lion, golden eagles and the endemic Diablo sunflower and Diablo manzanita. Expansive views stretch to Mt. Diablo and Mount St. Helena to the north and the Sierra Nevada range to the east. Preserve trails are named for the First people, animals such as Condor (Molluk), Prairie Falcon, Eagle and Coyote, for natural features and for features of the preserve's ranching history.

In the late 1960s and early 1970s Manfred "Manny" Lindner of the Contra Costa Park Council helped lead efforts to establish a new preserve in Morgan Territory, going so far as to create a large three dimensional model of the main ridge and the headwaters of Marsh Creek that were most prized. Hulet Hornbeck, Chief of Acquisitions for the East Bay Regional Park District, collaborated with Lindner in convincing the District Board of Directors to create the Preserve in an area with little public interest or need. These efforts would prove to be prescient as the population of the nearby Tri-Valley exploded and the boom of Silicon Valley would dramatically increase land prices.

Bob Walker (1952-1992), environmentalist and photographer, a president of the Sierra Club San Francisco Bay Chapter and one of the founders of the Chapter's Gay Lesbian Activities Section (GLS), the first such group, led the dramatic expansion of the preserve in the late 1980s and early 1990s from 970 acres (3.9 km²) to more than 5,000 acres (20 km²). Walker was also a member of the Board of Directors of the non-profit Save Mount Diablo. The same period was marked by expansion of Mount Diablo State Park east to join with the Preserve in Riggs Canyon.

Serving with Walker was Robert Doyle, president of Save Mount Diablo at the time and who had succeeded Hornbeck as Assistant General Manager and Chief of Acquisitions for the East Bay Regional Park District. Doyle and Walker strategized about how to create public support for expanding the Preserve from its original 970 acres (3.9 km²), and in 1987 the square mile Marshall property was added to the Preserve. Seth Adams, staff for Save Mount Diablo, aided Walker and Doyle even as SMD worked to expand the nearby Mt. Diablo State Park with its Morgan Ranch acquisition.

This first connection between the two parks, marked by SMD's acquisition of the 631 acre (2.6 km²) Morgan Ranch, was celebrated by a 1988 backpacking trip that eventually led to the 1994 creation of the 30-mile (48 km) Diablo Trail across six parks from Walnut Creek to Brentwood. In quick succession large square mile sections were added to the Preserve even as the 19,000 acre (77 km²) Los Vaqueros watershed was preserved to the east and Round Valley, threatened by Contra Costa County landfill proposals, was made into another new adjoining Regional Preserve.

Bob Walker died of AIDS in 1992 but lived long enough for the Board of Directors of the East Bay Regional Park District to memorialize him with the naming of the Bob Walker Ridge (a section of Morgan Territory Ridge) and of the Bob Walker Regional Trail (overlaying sections of the Highland Ridge and Diablo Trails.)

Walker's collection of more than 30,000 photographic slides, primarily of the East Bay, were transferred to the Natural History Section of the Oakland Museum, also known as the Museum of California.

The 631 acre (2.6 km²) Morgan Ranch was acquired from Willard "Bill" & Naomi Morgan in 1989 by Save Mount Diablo and transferred to Mt. Diablo State Park to become the first and corner connection to Morgan Territory Regional Preserve. Bill Morgan is a great grandson of Jeremiah Morgan. The Morgan Ranch is a nearly square parcel which rises from Marsh Creek,WAS is draped over Highland Ridge, and then descends west to Tassajara Creek in Riggs Canyon.

In 2004 Save Mount Diablo also acquired the "Morgan Red Corral" across Morgan Territory Road from the Morgan Ranch, in part to serve as a staging area for this easternmost part of the State Park.

The Morgan Backpack Camp (Morgan Territory Regional Preserve) was constructed in 2001 on the Highland Ridge Trail, a section of the Diablo Trail, at the former Cardoza homesite. The site was a campsite on the inaugural 1988 trip on the proposed Diablo Trail and was later improved into a camping facility.

Morgan Sulfur Spring is in lower Curry Canyon, Morgan Territory, found part way down Sulfur Spring Canyon, which drains from Windy Point to Curry Creek. May have been named by Mary Bowerman, who designated it as “Morgan Sulphur Spring” probably for the Morgan family for whom the area is named.