Map of Okinawa Prefecture, including Sakishima Islands (Miyako and Yaeyama)

The Sakishima Islands (先島諸島, Sakishima shotō?) (Okinawan: Sachishima) are an island chain located at the southernmost end of the Japanese Archipelago. They are part of the Ryukyu Islands and include the Miyako Islands and the Yaeyama Islands. The islands are administered as part of Okinawa Prefecture, Japan.

The Sakishima Islands were first documented in the Nihon Shoki (720), which says that Ōnoason Okeji (太朝臣遠建治?) paid tribute to Dazaifu with 52 islanders from Amami (奄美?), Shigaki (信覚?), and Kumi (球美?). Shigaki is believed to be the current Ishigaki (石垣?), Kumi to be the current Kume (久米?) or Komi (古見?) settlement of Iriomote[citation needed]. The History of Yuan (1370) documented a castaway from Mìyágǔ (密牙古) arrived to Wenzhou in 1317. This is believed to be the first documentation of Miyako (宮古?)[citation needed].

Stone tools and shell tools from 2,500 years ago have been excavated from shell mounds on the Sakishima Islands. Shell tools of the same era are also found in Taiwan and the Philippines, but not on Okinawa Island or Amami. Thus those islands are thought to have had a stronger or closer cultural relationship with Taiwan, the Philippines, and other regions.

Local earthenware was made beginning in the 11th century. Many local leaders, known as anji, appeared in the 15th century. At the same time, the political authorities on Okinawa saw the outlying islands as useful stopping points along a maritime trade route, and gradually enhanced their influence. Yohanashiidu Tuyumya (与那覇勢頭豊見親?) unified Miyako in 1365, and paid tribute to Satto, the king of the Chūzan kingdom of Okinawa.

In 1500, Oyake Akahachi (遠弥計赤蜂 or 於屋計赤蜂?), the anji of Ishigaki, rose up in resistance against the Ryūkyū Kingdom. King Shō Shin responded by sending troops, headed by Nakasone Tuyumya (仲宗根豊見親?), the anji of Miyako. Nakasone succeeded in suppressing Oyake's revolt, and the majority of the Sakishima Islands went under Ryūkyū's control. Yonaguni, however, remained independent until 1522, supposedly under the legendary female leader San'ai Isoba (サンアイ・イソバ?), though there is some debate as to whether the legendary figure ever existed.

The Shimazu clan of the Japanese feudal domain of Satsuma invaded the kingdom in 1609. In the following centuries under Shimazu control, the Ryūkyū government was placed under extreme tax pressure, and instituted a heavy poll tax in the Sakishimas. As a result of the extreme economic conditions, infanticide and other methods of population control became common, as they did throughout the Ryukyus; remains of the sites where this took place can still be found throughout the Sakishima Islands. Yaeyama islanders were taxed even more heavily than those of Miyako, as the rebel Oyake was from Yaeyama. The kingdom prohibited migration of islanders, isolating them to prevent group resistance. The Yaeyama Earthquake in 1771 caused a tsunami which killed 12,000, or a half of the entire Sakishima population. Because the soil was adversely affected by salination, famines were frequent, and the population of the islands further decreased until the early Meiji period.

After the Meiji Restoration, in 1872, the Japanese government abolished the Ryūkyū Kingdom and incorporated the islands as a part of Japan. The Qing Dynasty of China, however, opposed the action, claiming sovereignty over the former kingdom. Japan proposed to cede Sakishima Islands, provided China add "most favored nation" status of Japan to the Sino-Japanese Treaty of Amity. China agreed at first, but after objections from Viceroy Li Hongzhang, the agreement was not made. China effectively conceded its claims to sovereignty over the Ryukyus, including the Sakishima Islands, following its defeat by Japan in the Sino-Japanese War of 1894-95.

The modernization of Sakishima by the Japanese government was slow compared with mainland Japan or even mainland Okinawa. The heavy poll tax continued until as late as 1903. Meanwhile, the islands, as well as Taiwan, used Western Standard Time (UTC+8) until 1937, 1 hour behind the Central Standard Time of Japan (UTC+9). 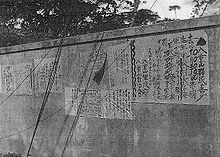 A notice board by the Yaeyama Community Association, December 1945

Unlike Okinawa Island, the Sakishima Islands did not suffer a ground war during World War II. However, they suffered air raids and naval bombardment in 1945. From June, the Japanese government ordered locals to evacuate to northern Ishigaki and Iriomote, where 3,647 of them lost their lives to malaria. (In contrast, air raids killed much fewer: 174.) Because of the disease, these areas had been sparsely populated throughout history. The disease was not eradicated until 1961. In June 1945, after the Imperial Japanese Army was defeated on Okinawa, there was a vacuum of military and government in the Sakishimas. Some garrison troops robbed crops from farms or engaged in violence against locals. To counter them, the residents of Ishigaki formed the Yaeyama Community Association (八重山自治会?). Since it acted as a temporal local government, some historians later described the association as the Yaeyama Republic (八重山共和国?). United States Occupation authorities declared the establishment of military rule in December 1945, restoring Miyako Subprefecture and Yaeyama Subprefecture. The local association ceased. In 1952, the Treaty of San Francisco confirmed these islands to be under American control.

The islands were restored to Japan in 1972, with other parts of Okinawa Prefecture.