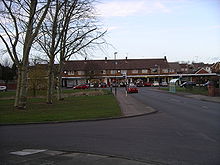 Shops on Sutton Avenue and the green opposite

The sub-district of Mount Nod is located between Lower Eastern Green and the A45 Coventy to Birmingham dual-carriageway. The suburb of Tile Hill North is to the south and the districts of Allesley, Allesley Green and Whoberley lie to the north and east. To the west is the boundary of the Metropolitan Borough of Solihull, including the village of Berkswell.

A small brook runs from the west to the east through Eastern Green. For parts of its course the brook is set in a narrow band of green land set with bushes and trees. 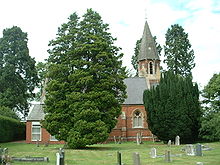 The Victorian Church of St. Andrew

The Church of St Andrew, Upper Eastern Green, established in 1875, is on the western border of Coventry. It overlooks farmland and Solihull to the west. A primary school is situated adjacent to the eastern side of the church grounds.

The stream that runs through Eastern Green is known locally as the Brookstray.