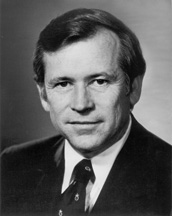 Howard Henry Baker, Jr. (born , ) is a former Senate Majority Leader, Republican U.S. Senator from , , and a former to .

Known in as the "Great Conciliator," Baker is often regarded as one of the most successful senators in terms of brokering compromises, enacting legislation, and maintaining civility. A story is sometimes told of a reporter telling a senior Democratic senator that privately, a plurality of his Democratic colleagues would vote for Baker for . The senator is reported to have replied, "You're wrong. He'd win a majority."

Baker was born in Huntsville, in Scott County, Tennessee. He attended in Chattanooga, and after graduating he attended in . During , he trained at a U.S. Navy facility on the campus of the in . He served in the from 1943 to 1946 and graduated from the College of Law in 1949. That same year, he was admitted to the Tennessee bar and commenced his practice. The rotunda at the University of Tennessee College of Law is now named for him. While delivering a commencement speech during his grandson’s graduation at (Johnson City), Baker was awarded an honorary doctorate degree on , . Fact|date=June 2007 Baker is an alumnus of the fraternity.

Baker's father, Howard H. Baker, Sr., served as a Republican member of the from 1951 until 1964. He represented a traditionally Republican district in east Tennessee.

The younger Baker began his own political career in 1964, when he lost an election to fill the unexpired term of the late Senator to the liberal Democrat . In the 1966 Senate election, Bass lost the Democratic primary to former . In the general election, Baker capitalized on Clement's failure to energize the Democratic base, specifically Tennessee labor, and won. He thus became the first elected Republican senator from Tennessee since Reconstruction.

In 1971, President asked Baker to fill one of two empty seats on the . When Baker took too long to decide whether he wanted the appointment or not, Nixon changed his mind and decided to nominate instead. [ [http://query.nytimes.com/gst/fullpage.html?res=9500E1DF1331F937A35752C1A9679C8B63 Renchburg's the One! - New York Times ] ]

Baker was re-elected in 1972 and again in 1978, and served from , , to , . For the last eight of those years, he led the Senate Republicans, with two terms as (1977–1981) and two terms as (1981–1985). Baker was also the influential ranking minority member of the Senate committee, chaired by Senator , that investigated the . He is famous for having asked aloud, "What did the President know and when did he know it?", a question given him to ask by his counsel and former , future U.S. Senator .

Baker was frequently mentioned by insiders as possible nominee for on a ticket headed by President in 1976 and, according to many sources, a front-runner for this post. Ford, however, in a surprising move, chose Senator [ [http://cgi.cnn.com/ALLPOLITICS/1996/candidates/republican/dole/political.career/ AllPolitics - Candidates - Republicans ] ] .

Baker ran for President in 1980, dropping out of the race for the GOP nomination after losing the to and the to . Baker's duties as Senate Minority Leader prevented him from campaigning heavily in these important early test races.

He did not seek re-election in 1984, and received the the same year. However, as a testament to his skill as a negotiator and honest and amiable broker, Reagan tapped him to serve as Chief of Staff during part of his second term (1987–1988). Many saw this as a move to mend relations with the Senate, which had deteriorated somewhat under the previous Chief of Staff, . (Baker had complained that Regan had become a too-powerful "Prime Minister" inside an increasingly complex .) In accepting this appointment, Baker chose to skip another bid for the White House in 1988. [cite web |first=Jacob V. |last=Lamar Jr |title=The Right Man at the Right Time |url=http://www.time.com/time/printout/0,8816,963713,00.html |work=Time |date=March 9, 1987]

In 2001, the was set up at the in honor of the former senator. Vice President gave a speech at the 2005 ground-breaking ceremony for the Center's new building.

Baker is currently Senior Counsel to the of . [ [Howard H. Baker's profile, from the Baker Donelson firm website] ] He is also an Advisory Board member for the , a not-for-profit organization dedicated to recreating the bipartisan center in American national security and foreign policy.