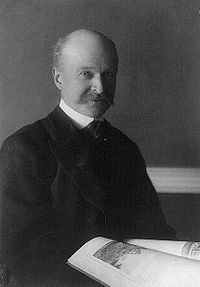 Charles Follen McKim FAIA (August 24, 1847 – September 14, 1909) was an American Beaux-Arts architect of the late 19th century. Along with Stanford White, he provided the architectural expertise as a member of the partnership McKim, Mead, and White.

McKim was born in Chester County, Pennsylvania to James Miller McKim, a Presbyterian minister, and Sarah Speakman McKim. His parents were active abolitionists and he was named after Charles Follen, another abolitionist and a Unitarian minister. After graduating from Harvard, he studied architecture at the École des Beaux-Arts in Paris[1] before joining the office of Henry Hobson Richardson in 1870. McKim formed his own firm in partnership with engineer William Rutherford Mead, joined in 1877 by fellow Richardson protégé Stanford White.

For ten years, the firm was primarily known for their open-plan informal summer houses. McKim became best known, however, as an exponent of Beaux-Arts architecture in styles that exemplified the American Renaissance, exemplified by the Boston Public Library (1887), and several works in New York City: the Morningside Heights campus of Columbia University (1893), the University Club of New York (1899), the Pierpont Morgan Library (1903), New York Penn Station (1904–10), and The Butler Institute of American Art in Youngstown, Ohio (1919). He designed the Howard Mansion (1896) at Hyde Park, New York.[2]

McKim, with the aid of Richard Morris Hunt, was instrumental in the formation of the American School of Architecture in Rome in 1894, which has become the American Academy in Rome, and designed the main campus buildings with his firm McKim, Mead, and White.

McKim received numerous awards during his lifetime, including the Medaille d'Or at the 1900 Paris Exposition, a gold medal from Edward VII of the United Kingdom,[3][4] and honorary doctorates from the University of Pennsylvania and Columbia University. He was elected a Fellow of the American Institute of Architects in 1877, and received the AIA Gold Medal, posthumously, in 1909.