In electrical and electronic engineering, a current clamp or current probe is an electrical device having two jaws which open to allow clamping around an electrical conductor. This allows properties of the electric current in the conductor to be measured, without having to make physical contact with it, or to disconnect it for insertion through the probe. Current clamps are usually used to read the magnitude of a sinusoidal current (as invariably used in alternating current (AC) power distribution systems), but in conjunction with more advanced instrumentation the phase and waveform are available. Very high alternating currents (1000 A and more) are easily read with an appropriate meter; direct currents, and very low AC currents (milliamperes) are more difficult to measure.

The most common form of current clamp comprises a split ferrite ring. A wire coil is wound round one or both halves, forming the secondary winding of a current transformer. The conductor to be measured forms the primary. Like any transformer this type works only with AC or pulse waveforms, with some examples extending into the megahertz range.

This type may also be used to inject current into the conductor, for example in EMC susceptibility testing to induce an interference current. Usually, the injection probe is specifically designed for this purpose.

In the iron vane type, the magnetic flux in the core directly affects a moving iron vane, allowing both AC and DC to be measured, and gives a true RMS value for non-sinusoidal AC waveforms. Due to its physical size it is generally limited to power transmission frequencies up to around 100 Hz.

The vane is usually fixed directly to the display mechanism of an analogue (moving pointer) clamp meter.

The Hall effect type is more sensitive and is able to measure both DC and AC, in some examples up to the kilohertz (thousands of hertz) range. This type is often used with oscilloscopes, and with high-end computerized digital multimeters.

A multimeter with built in clamp.
Pushing the large button at the bottom opens the lower jaw of the clamp, allowing the clamp to be placed around a conductor.

An electrical meter with integral AC current clamp is known as a clamp meter, clamp-on ammeter or tong tester.

In order to use a clamp meter, only one conductor is normally passed through the probe; if more than one conductor is passed through then the measurement would be the vector sum of the currents flowing in the conductors and would depend on the phase relationship of the currents. In particular if the clamp is closed around a two-conductor cable carrying power to equipment the same current flows down one conductor and up the other, with a net current of zero. Clamp meters are often sold with a device that is plugged in between the power outlet and the device to be tested. The device is essentially a short extension cord with the two conductors separated, so that the clamp can be placed around only one conductor.

The reading produced by a conductor carrying a very low current can be increased by winding the conductor around the clamp several times; the meter reading divided by the number of turns is the current, with some loss of accuracy due to inductive effects.

Clamp meters are used by electricians, sometimes with the clamp incorporated into a general purpose multimeter. 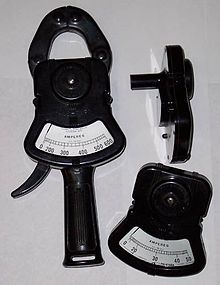 Less-expensive clamp meters use a rectifier circuit which actually reads mean current, but is calibrated to display the RMS current corresponding to the measured mean, giving a correct RMS reading only if the current is a sine wave. For other waveforms readings will be incorrect; when these simpler meters are used with non-sinusoidal loads such as the ballasts used with fluorescent lamps or high-intensity discharge lamps or most modern computer and electronic equipment, readings can be quite inaccurate. Meters which respond to true RMS rather than mean current are described as "true RMS".

Typical hand-held Hall effect units can read currents as low as 200 mA, and units that can read down to 1 mA are available.

The Columbia tong test ammeter, manufactured by Weschler Instruments, is an example of the iron vane type, used for measuring large AC currents up to 1000 amperes. The iron jaws of the meter direct the magnetic field surrounding the conductor to an iron vane that is attached to the needle of the meter. The iron vane moves in proportion to the strength to the magnetic field and thus produces a meter indication proportional to the current. This type of ammeter can measure both AC and DC currents and provides a true RMS current measurement of non-sinusoidal or distorted AC waveforms. Interchangeable meter movements can be installed in the clamping assembly to provide various full-scale current values up to 1000 amperes. The iron vane is in a small cylinder that is inserted in a space at the hinged end of the clamp-on jaws. Several jaw sizes are available for clamping around large conductors and bus bars up to 4+1⁄2 inches (110 mm) wide.

Clamp meters are used in some meters to measure electrical power and energy. The clamp measures the current and other circuitry the voltage; the true power is the product of the instantaneous voltage and current integrated over a cycle. Comprehensive meters designed to measure many parameters of electrical energy (power factor, distortion, instantaneous power as a function of time, phase relationships, etc.), energy analyzers, use this principle. With an appropriate instrument measurements may be made on three-phase, as well as single-phase, power systems.