Christopher John Judge Smith (born 1948 in England), is a songwriter, composer and performer, and a founder member of progressive rock band Van der Graaf Generator. Initially working under the name Chris Judge Smith, he has been known simply as Judge Smith since 1994.

In 1967, with Peter Hammill, Judge Smith founded the band Van der Graaf Generator. He was originally a singing drummer and percussionist (sometimes playing a typewriter),[1][2] but after drummer Guy Evans joined the band, Smith realized that there wasn't a great deal left for him to do, since his role was reduced to being a harmony singer.[3] After recording the first Van der Graaf Generator-single ("People You Were Going To" b/w "Firebrand"), Smith amicably left the band in 1968.[4]

He went on to form a jazz-rock band called Heebalob, which included saxophonist David Jackson (who would later join Van der Graaf Generator).[5] After the demise of Heebalob, Smith pursued a solo career, and wrote and recorded many songs, some of which appeared on his (currently unavailable) first solo album Democrazy (1991). Smith also wrote several stage musicals as lyricist with composer Maxwell Hutchinson, including The Kibbo Kift (1976) and The Ascent Of Wilberforce III (1981) and his own chamber opera, The Book Of Hours (1978). Mata Hari (1982), was his last musical, co-written with (and starring) Lene Lovich.[6]

Around 1973, Smith, together with Van der Graaf Generator co-founder Peter Hammill, began work on an opera based on the short story The Fall of the House of Usher by Edgar Allan Poe, Smith writing the libretto and Hammill composing the music.[5] The album was finally released in 1991 on Some Bizzare Records, with a cast of singers including Lene Lovich, Andy Bell, Sarah Jane Morris and Herbert Grönemeyer. A reworked version, entitled The Fall Of The House Of Usher - deconstructed & rebuilt, was released on Hammill's Fie! label in 1999.[7] The new version is notable for having a cleaner, better produced sound, additional guitars and (unlike the first version) no percussion.[8]

In 1974 Smith wrote and directed a short film entitled The Brass Band, which has won several international awards.[9]

Smith also wrote music for the television comedy series Not The Nine O'Clock News in the 1980s, including the punk rock parody "Gob on You".

In 1993 Dome Of Discovery was released, Smith's first CD proper. Apart from the vocals, virtually every note on the album came from the sampled sounds of real instruments.[10] Smith spent months making his own samples, hiring various musicians and recording individual notes.[10] Since 2006, a remastered version has been available for download at iTunes.

After many years of work developing a new form of narrative music he calls "Songstory", Smith completed and released, in 2000, the double CD Curly's Airships, about the R101 airship disaster of 1930. Amongst many others, Peter Hammill, Hugh Banton, Arthur Brown, David Jackson, John Ellis and Pete Brown performed on the project.[11] Smith believes that the 2 hr 20 min work might be the largest and most ambitious single piece of rock music ever recorded.[12] Curly's Airships was to be the first of three Songstories so far written and composed by Smith. 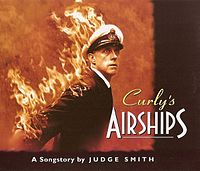 On the same day that Van der Graaf Generator played their reunion concert in the Royal Festival Hall in London, 6 May 2005, Smith played an afternoon concert, his first for many years, at the Cobden Club in London. This concert launched his new album The Full English, and featured (amongst others) all the songs on it. He was accompanied by John Ellis on electric guitar, Michael Ward-Bergeman on accordion and René van Commenée on percussion.[13]

2006 also saw the release of The Vesica Massage, an album of instrumental music designed for use by massage therapists.

In October 2007 Smith released a two-song single CD, "The Light of the World" / "I Don't Know What I'm Doing", under the name of The Tribal Elders. This band consisted of Judge Smith, David Jackson, John Ellis, Michael Ward-Bergeman and Rikki Patten.

In January 2008 the full-length album Long-Range Audio Device was released, under the name of L-RAD, a collaboration between Judge Smith and American artist Steve Defoe. Defoe is a founder of The Larry Mondello Band, who released numerous cassette tapes of their lo-fi music in the 1980s and 1990s.

In May 2009 Smith performed the premiere of his second songstory, The Climber (written in 2005). The work was performed with a Norwegian male-voice choir, the Fløyen Voices, and no other instruments apart from a double bass, at USF Verftet in Bergen, Norway.[15] A studio recording was released on 17 May 2010.

Smith released his third songstory, Orfeas, on 9 May 2011. It is a retelling of the ancient myth of Orpheus, performed by seven separate ensembles, each playing an entirely different kind of music.[17] It features performances by, amongst others, John Ellis (as George Orfeas), Lene Lovich (as Eurydice) and David Jackson (as the saxophone player in the George Orfeas Band).

At the official Judge Smith Musicography you will find an attempt to create a complete list of all Judge Smith's musical activities.