The Cougar is an armored fighting vehicle designed to be resistant to anti-vehicle mines and improvised munitions.

It is a family of armored vehicles produced by Force Protection Inc, which manufactures ballistic and mine-protected vehicles. The automotives are integrated by Spartan Motors.[2] These specialty vehicles are protected against small arms, land mines and IEDs using a combination of design features and materials to protect both the crew and engine compartment against a wide range of attacks.[6] A Monocoque type, V-shaped hull extends to the engine bay and serves to direct the blast away from under the vehicle. The dual air-conditioners help keep heavily dressed troops from overheating in temperatures over 100 °F (38 °C) in Iraq.

Technical Solutions was building a new type of mine-resistant vehicle based on South African vehicles. Technical Solutions was purchased in 2002 by Sonic Jet and the combined company renamed itself Force Protection.[7] The Cougar was designed in 2004 by a small team at Force Protection, Inc. in the US in response to an urgent requirement by the US Marine Corps. Contrary to common belief, this was not a South African vehicle but rather a new design developed in the US based on an evolution of vehicle mine-protection technology used by the UK, Rhodesian and South African forces from the 1950s. The rapid development and production followed a USMC request that the first vehicle be delivered within 6 months of an order.

Some 4,000 of these vehicles will have been fielded under the US military's MRAP (Mine Resistant Ambush Protected) and other vehicle programs.[8] US Defense secretary Robert Gates demanded that the vehicles be ordered in larger numbers after the Marines reported in 2004 that no troops had died in more than 300 IED attacks on Cougars.[7] Since then, Cougar vehicles have been hit by improvised explosive devices (IEDs) many times in Iraq with few fatalities. Britain chose the Cougar over the RG-31 Nyala for their "Mastiff" APV.[9]

The Cougar comes in two configurations, a 4×4 and 6×6. It is designed for the transport and protection of troops and equipment, especially against explosives (IEDs).

Badger ILAV (Iraqi Light Armored Vehicle)
Based on the Cougar and manufactured by FPII and BAE Systems for the Iraqi Army. The ILAV is based on the Cougar, which can carry ten passengers (the six wheel version can carry 16). The Cougar/ILAV vehicle uses a capsule design to protect the passengers and key vehicle components from mines and roadside bombs. The larger Cougar costs about $730,000 each[citation needed], fully equipped. The Cougars have been very popular with American troops, and with Iraqis who have worked with them. 865 ILAVs were ordered by Iraq and 18 by Yemen. The ILAV gives the Iraqis the same degree of protection that most Coalition troops have.

Cougar JERRV (Joint EOD rapid response vehicle)
4x4 and 6x6 variants for the US Army, USAF, and USMC. Approx. 200 ordered in 2005 and 2006, with another 200 ordered in late 2006 but now called MRAPs to take account of the new US military/political initiative to be seen to be responding to public concerns about casualties.

Cougar ISS
Based on the Cougar 4x4, the ISS is fitted with an integrated independent suspension system that gives the vehicle increased cross-country mobility.[10]

Ridgback PPV (Protected Patrol Vehicle)
British version of the Cougar 4x4 from FPII base vehicles with a British armor package and electronics, including installation of Enforcer remote weapon stations on some vehicles.

Mastiff PPV (Protected Patrol Vehicle)
British version of the Cougar 6x6, with FPII providing the base vehicle and NP Aerospace in the UK integrating electronics and the British armor package. The Mastiff 2 is an improved version with a capacity of 2 + 8. The Mastiff is armed with a 7.62 mm GPMG, 12.7 mm Heavy Machine Gun or 40 mm Grenade Machine Gun.

Mastiff 2 'Protected Eyes'
A version of the British Mastiff specially designed for the Talisman Counter-IED program. It is fitted with an M151 Protector remote weapon station, mine plow, optical camera[11] and a Micro Air Vehicle (MAV) with screens in the back to display its camera feed.[12]

Wolfhound (Heavy Tactical Support Vehicle)
British modification of the Cougar 6x6, with FPII providing the base vehicle and NP Aerospace in the UK integrating electronics and the British armor package. The first Wolfhounds entered service in Afghanistan in October 2010. 130 have been ordered[13] for gun tractor and logistical roles.[14]

MRAP
Several thousand vehicles of 4x4 and 6x6 configuration for all of the US Armed Forces, though mostly for the USMC. Over 3500 MRAPs will be delivered by the end of 2008.[citation needed] 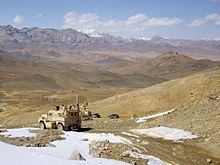 Compared to the original Cougar vehicle, the British Forces variant is to be fitted with large, vertical armor plates which cover the large vision blocks and weapon firing ports. This is in line with British Army doctrine concerning the role of the APC/MICV, specifically that it is to carry troops under protection to the objective and then give firepower support when they have disembarked. The Mastiff will be fitted with a turret sporting either a L7A2 GPMG (General Purpose Machine Gun), L110A1 Light Machine Gun, L11A1 Heavy Machine Gun, L134A1 40mm Grenade Machine Gun, or even a 50mm cannon.[24] One aspect of the British Army's approach to APC/MICV units (which differs to that of the United States) is that ability of the average soldier to fire accurately out of the ports of a moving IFV has been questioned. The large armor plates will also give added side protection from RPGs or IED explosions.

The British Army has operated an earlier MPV named "Tempest MPV".[25][26] As of November 2008, the British Army has ordered over 400 Cougar vehicles for deployment in Iraq and Afghanistan following a series of Urgent Operational Requirements (UORs). Deliveries of the first 86 Mastiffs began in February 2007, and an order for 22 further vehicles was placed in March, bringing the total to 108. In October 2007 Gordon Brown announced a further 140 Mastiffs and 157 new Cougar 4x4 variants, named Ridgback were being ordered to protect troops from mines and roadside bombs.[27]

Canada has deployed the Cougar since October 2007 in Afghanistan.[28]