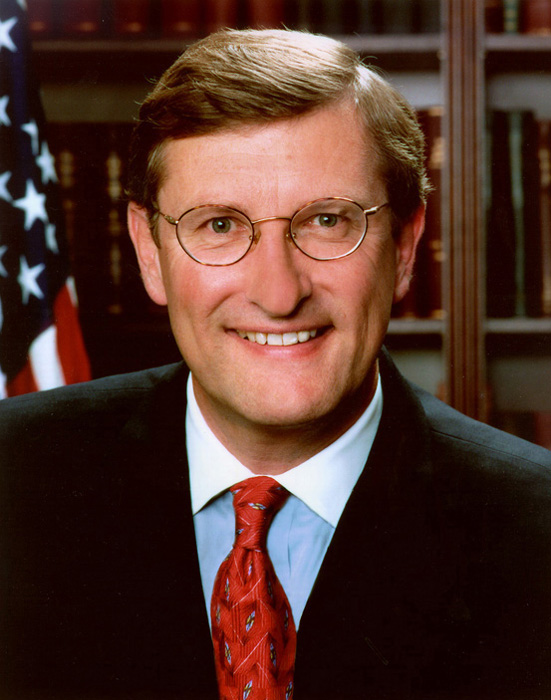 Gaylord Kent Conrad (b. , ) is a from . He is a member of the , the North Dakota affiliate of the Democratic Party. He is the chairman of the Senate Budget Committee.

Kent Conrad was born in to parents and lived much of his early life in Bismarck. Orphaned at a young age, he was raised by his grandparents. He attended Roosevelt Elementary and Hughes Junior High, and several years of high school in . He graduated in 1966 from , like his opposite on the Senate Budget Committee, Senator . He went to college at Stanford and received an from .

Conrad has been married twice. His first wife, Pam, is the sister of U.S. Secretary of Agriculture and former North Dakota Governor . [ [http://www.hpj.com/archives/2007/nov07/nov12/MeetthenomineeforSecretaryo.cfm?login=true Meet the nominee for Secretary of Agriculture ] ] [ [http://www.govexec.com/dailyfed/1007/103107cdpm2.htm Bush nominates former North Dakota governor as Agriculture secretary (10/31/07) - www.GovernmentExecutive.com ] ] They had one daughter, Jessamyn. Following their divorce, Conrad married Lucy Calautti, a lobbyist for .

In the 1986 election, Conrad defeated the Republican incumbent, , by 2,100 votes in what some may consider an upset; Andrews had represented North Dakota at the federal level since 1963 (he had previously served in the House before moving to the Senate in 1981).

During the campaign, Conrad pledged that he would not run for re-election if the had not fallen by the end of his term. By 1992 it became obvious that this would not be the case, and although polls showed that the electors would have welcomed him going back on his pledge, Conrad considered his promise binding and did not run for re-election. Dorgan won the Democratic primary election.

Conrad got an unusual opportunity to remain in the Senate when the other North Dakota senator, long-serving Dem-NPLer , died on , . Burdick's widow, Jocelyn Birch Burdick, was appointed to that seat temporarily, but a special election was needed to fill the rest of the term. As this was not running for re-election, Conrad ran for and secured the Democratic-NPL nomination. He won the special election and was sworn in , , resigning his other seat the same day. (The first seat was then filled by Dorgan, who was appointed by the governor on , to fill the seat for the brief interim until he would have been sworn in under normal circumstances.)

Despite North Dakota's Republican lean, Conrad was handily reelected in 1994 — a year in which marginal seats everywhere fell to Republicans. He hasn't faced serious opposition since.

Conrad has been very vocal in his opposition to the spending policies of the Bush Administration. He contends that they have worsened the problems of . Conrad is opposed to most free-trade measures and is a strong supporter of farming subsidies to family farmers.

Conrad is more moderate than many in his own party on the issues of and . He is one of the few members of the Democratic Party to have voted consistently in favor of banning the procedure commonly referred to as "partial-birth" abortion. He also opposes public funding of abortion. However, Conrad voted in favor of lifting the ban on military base abortions. [ [http://www.ontheissues.org/Social/Kent_Conrad_Abortion.htm#2000-134 Kent Conrad on Abortion ] ] Conrad also has a mixed record on gay rights. While he personally is opposed to gay marriage, he voted against a propsed constitutional ban on the matter and has supported bills that prevent discrimination based on sexual orientation. On , , Conrad was one of only four Democrats to vote in favor of confirming Judge to the Supreme Court.

Conrad voted against approving use of military force in in 1991 and was one of only 23 senators to vote against the war resolution of 2002. While he initially voted in favor of the , he has been a staunch opponent of warrantless wiretapping and of the prison facility.

In April 2006, he was selected by "Time" as one of "America's 10 Best Senators". That same year, he was commended by "The American" for his knowledge of econoimc issues.

Conrad is widely known for being very detailed in his analysis of monetary policies and budget issues. He almost always uses charts, graphs, and other visuals at press conferences as well as on the Senate floor. He considers himself a "deficit hawk" because of his calls for a balanced federal budget [http://conrad.senate.gov/about/] . Conrad has been an outspoken supporter of creating a more progressive taxation system. He has voted against Republican proposals to repeal the estate, death, and alternative minimum taxes. He supports lowered middle class taxes, but increasing them for those making over $1 million per year, and Conrad also believes that the Bush tax cuts should be repealed and that revenues made from doing so should go to education and deficit reduction.

Kent Conrad was one of the very first Senators to have endorsed Senator Barack Obama for the 2008 Democratic Presidential Race.

Conrad is also a leading member of the "", a bipartisan group which has created a compromise for American energy policy.

In June 2008, it was reported that Senate Conrad had received mortgages on favorable terms for a second home and an apartment building due to his association with CEO .

In 2006, Republicans heavily wooed popular Governor to face him. Hoeven was considered by many analysts to be the only Republican who could possibly defeat Conrad. However, Hoeven declined, effectively handing Conrad a fourth full term.

The only Republican to file by the deadline was , an Anderson town councilman and farmer from Sanborn in Barnes County.

As of August 2006, Conrad had the highest approval rating among his constituents of any , at 74% approval to only 21% disapproval, despite his being a Democrat in a historically Republican state. [http://www.surveyusa.com/50State2006/100USSenatorApproval060817Approval.htm]

Conrad is the only person ever to hold two U.S. Senate seats on the same day.Fact|date=May 2008