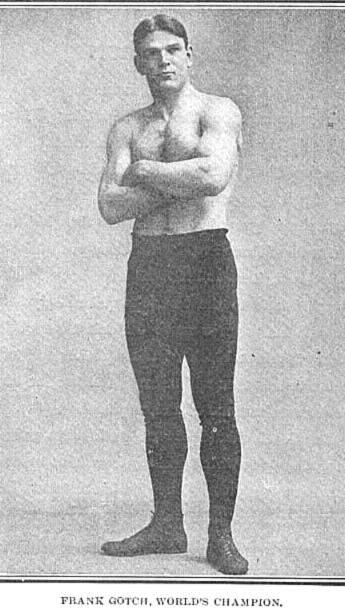 Frank Alvin Gotch (, - , ) was an American credited for popularizing professional wrestling in the United States. He competed back when the contests were largely legitimate (see ), and his reign as World Heavyweight Wrestling Champion (from 1908 to 1913) is the second longest in the history of wrestling. He became one of the most popular athletes in America from the 1900s to the 1910s.

The son of Frederick Rudolph and Amelia Gotch, Gotch was born and raised on a small farm three miles south of . He took up wrestling in his teens, earning a reputation by beating locals. He adopted the toe hold as his finishing/signature move.

Gotch wrestled his first professional match in , on , , against former American Heavyweight Champion, Dan McLeod. Gotch impressed the veteran by holding his own for nearly two hours before losing. On , , Gotch challenged another former American Champion, "Farmer" , losing in 11 minutes, but impressing Burns, who offered to train Gotch. Under the guidance of Burns, Gotch won a series of matches in and later, . While in Alaska, Gotch wrestled under the name Frank Kennedy and won the title of "Champion of the Klondike". During his time in Alaska, Gotch tried his hand at , but failed miserably against the heavyweight Frank SlavinFact|date=March 2008.

Gotch returned to Iowa and instantly challenged the reigning American Heavyweight Champion, Tom Jenkins. Gotch lost their first match in 1903, before defeating Jenkins in a rematch on , to take the championship. After trading the title with Jenkins and Fred Beel, Gotch set his sights on the World Heavyweight Championship, then held by the undefeated Estonian . Hackenschmidt was favored to win, but he submitted to Gotch after 2 grueling hours to an ankle lock submission; [ [http://www.wrestlingmuseum.com/pages/wrestlers/georgehackenschmidt2.html Professional Wrestling Online Museum - Ring Chronicle Hall of Fame Inductee - Georg Hackenschmidt ] at www.wrestlingmuseum.com] It has been alleged that Gotch used illegal techniques in the match to defeat Hackenschmidt, which included oiling up his body, rubbing oil into Hack's eyes, scratching, gouging and hitting. At one time, Gotch also punched Hackenschmidt on the nose. [ [http://www.sandowplus.co.uk/Competition/Hackenschmidt/hack-biog.htm George Hackenschmidt - The Russian Lion - by David Gentle ] at www.sandowplus.co.uk] According to the 's book,"The Complete Idiot's Guide to Pro Wrestling", Gotch's reason for smothering himself with oil (in his first encounter against Georg Hackenschmidt) was to insure that Hackenschmidt couldn't apply his signature bearhug.

Gotch would spend the next three years establishing his dominance over the sport, defeating the likes of Jenkins, , and , who was believed to have won over 900 matches before falling to Gotch on , . Gotch became a national sensation, appearing in plays and even receiving an invitation to the by then president .

Gotch would meet Hackenschmidt again on , at the newly opened in , which drew a crowd of nearly 30,000 spectators and a record gate of $87,000. The rematch is one of the most controversial and talked about matches in wrestling history, as Hackenschmidt injured his knee in a training session with weeks before the match, and it was later revealed that Gotch had paid off Santel to insure that Hackenschmidt was not at 100% condition for the rematch. [ [http://www.wrestlingmuseum.com/pages/wrestlers/georgehackenschmidt2.html Professional Wrestling Online Museum - Ring Chronicle Hall of Fame Inductee - George Hackenschmidt ] at www.wrestlingmuseum.com] The injury was so severe that Hackenschmidt nearly withdrew from the match, but agreed to go on with the match only after Gotch had fabricated the claim that he also had an injury (his neck), but was still willing to compete regardless. [ [http://www.sandowplus.co.uk/Competition/Hackenschmidt/hack-biog.htm George Hackenschmidt - The Russian Lion - by David Gentle ] at www.sandowplus.co.uk] Before the match, the two had allegedly agreed on Gotch winning the match, but under the condition that Gotch would lose the first fall so that Hackenschmidt would look strong in defeat. Despite their agreement before the match, Gotch ended up double-crossing Hackenschmidt by quickly defeating him in two straight falls.

While in retirement, Gotch joined where he would pay any man $250.00 if they could last 15 minutes in a match against him without being pinned or conceding. Not once did he have to pay. He grew tired of touring and moved back to Humboldt. After a year of health troubles, Gotch died in 1917 of what was rumored to be syphilis, but the official cause of death was uremic poisoning.

There is a park named the "Frank A. Gotch County Park", three miles south of Humboldt near his childhood farm, in homage to Gotch. The [http://www.humboldt.k12.ia.us/ Humboldt Community School District] also sponsors the annual Frank Gotch Wrestling Tournament as well.