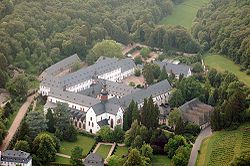 Eberbach Abbey (German: Kloster Eberbach) is a former Cistercian monastery near Eltville am Rhein in the Rheingau, Germany. On account of its impressive Romanesque and early Gothic buildings it is considered one of the most significant architectural heritage sites in Hesse, Germany. In the winter of 1985/86 the interior scenes of the film "The Name of the Rose" were filmed here. 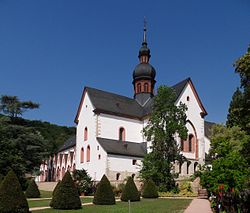 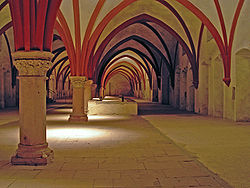 It was founded in 1136 by Bernard of Clairvaux as the first Cistercian monastery on the east bank of the Rhine, on the site of a previous monastic foundation of Adalbert of Mainz, occupied at first by Augustinian canons and then by Benedictine monks, which had however failed to establish itself.

It soon became one of the largest and most active monasteries of Germany from which a number of other foundations were made: Schönau Abbey near Heidelberg in 1142; Otterberg Abbey in the Palatinate in 1144; Gottesthal Abbey near Liege in 1155; and Arnsburg Abbey in the Wetterau in 1174. At its height in the 12th and 13th centuries, the population is estimated to have been about 100 monks and over 200 lay brothers.

Ebersbach Abbey was also very successful economically, principally as a result of profits from the cultivation of vineyards and the production of wine. At least 14 members of the family of the Counts of Katzenelnbogen were buried in the church. Among them was Count Johann IV of Katzenelnbogen, who was the first to plant Riesling vines, in a new vineyard in the nearby village of Rüsselsheim, when the monks of Eberbach were still growing red grapes such as Grobrot, the earliest grape variety recorded in Eberbach.

In about 1525 it is said that in the abbey there was an enormous wine barrel with a volume of between ca. 50,000 and 100,000 litres, which in the German Peasants' War of 1525 was heavily used by rebels from the Rheingau, who were encamped just below the monastery.

The abbey suffered severe damage during the Thirty Years' War, beginning with the attack of the Swedish army in 1631. Many valuable items from the church and the library were looted, and the monks were forced to flee, of whom only 20 returned in 1635 to begin a laborious reconstruction.

The 18th century however was a period of great economic success: surviving accounts show that the abbey profits were regularly invested on the Frankfurt money market.

The final decline set in with the French Revolution. After the Reichsdeputationshauptschluss the abbey was dissolved on 18 September 1803 and with its assets and territory became the property of Prince Friedrich August of Nassau-Usingen.

The lands passed from Nassau-Usingen in 1866 to Prussia, and from 1945 have formed part of the State of Hesse. The premises were put to a variety of uses. A lunatic asylum was accommodated here until 1873 (the forerunner of the Zentrum für Soziale Psychiatrie Rheinblick) and until 1912 a prison.

Management of the vineyards and wine production has continued in state hands. After considerable structural work Eberbach serves inter alia as a venue of international importance for cultural events and displays, and as a film location, as for example for Umberto Eco's "The Name of the Rose" (1985). 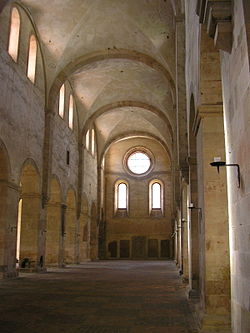 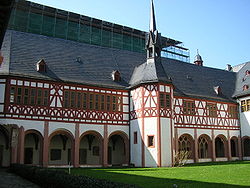 With effect from 1 January 1998 the Land of Hesse transferred the entire abbey complex into the ownership of a publicly owned charitable foundation, the "Eberbach Abbey Foundation" ("Stiftung Kloster Eberbach"), which has the declared aim of conserving the architectural and cultural monument that is Eberbach Abbey by overseeing its appropriate, controlled and sustainable use as well as of maintaining the historical tradition of wine production.

The buildings form one of the most impressive monastic sites in Germany, preserving structures of the highest quality from the Romanesque, Gothic and Baroque periods. A list of goods, the "Oculus Memoriae", survives from as early as the year 1211, giving information on the possessions and premises of the abbey complex.

The existing buildings include: 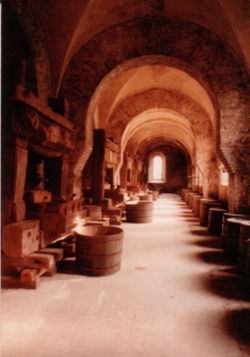 The vineyards of Eberbach Abbey were, at 300 hectares, the largest in medieval Europe. Most of them are now the property of the state of Hesse and are run by the Hessische Staatsweingüter GmbH Kloster Eberbach, which manages the largest connected area of wine production in Germany, comprising vineyards on the slopes of the Rhine Valley and on the Hessische Bergstrasse. Of the 200 hectares which are under cultivation, three-quarters are planted with Riesling, but Chardonnay, Pinot blanc, Pinot gris, Pinot noir and Dornfelder are also grown.

Wine tasting and sales take place in the New Hospital.

The abbey is the principal venue for the concerts of the Rheingau Musik Festival since 1988, with concerts in the Basilika (church), the Dormitorium, the Laiendormitorium and the Kreuzgang (cloisters).[1] It has also been used for other concerts. The public areas can be viewed daily, either with or without guided tours. Rooms can be booked for conferences and events. Wine tastings for groups can also be booked, and twice a year there are wine auctions.

On the night of 26 April 2005 the abbey suffered severe damage from flooding. This was due to heavy rain, which caused the Kisselbach river to overflow its banks, and the increased volume of water brought about the collapse of the 18th century storm drain under the abbey.