The Millrose Games is an annual indoor athletics meet (track and field) held on the first Friday in February in New York City. They will be held at the Armory in Washington Heights in 2012, after having taken place in Madison Square Garden from 1914 to 2011.[1] The games were started when employees of the New York City branch of Wanamaker's department store formed the Millrose Track Club to hold a meet. The featured event is the Wanamaker Mile. 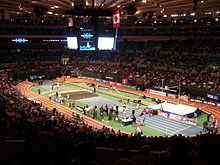 The Millrose Games began in 1908 at a local armory the same year when its parent, the Millrose Athletic Association, was formed as a recreational club by the employees of the John Wanamaker Department Store. "Millrose" was the name of the country home of Rodman Wanamaker.

In 1914, after overflowing the armory the year before, the Millrose Games moved to Madison Square Garden, and is the oldest continuous sporting event held there. For 10 years beginning in 1916, the Wanamaker 1 ½ Mile race was a highlight of the meet. Run for the last time in 1925, the final edition was won by Paavo Nurmi, the nine-time Olympic gold medalist from Finland. In 1926, the distance was shortened, and the Wanamaker Mile was born. It has often been run at 10 p.m., a carryover from the days beginning in the 1930s when legendary sports announcer Ted Husing would broadcast the race live on his 10 p.m. radio show.

Marking its 81st running last year, the Wanamaker Mile has been won by 44 different men, including such luminaries as Glenn Cunningham, Kip Keino, Tony Waldrop, Filbert Bayi, Steve Scott, Noureddine Morceli, Bernard Lagat, Marcus O'Sullivan and, of course, the Irish legend whose name is synonymous with the event: Eamonn Coghlan. Known as the “Chairman of the Boards” for his dominance on the old wooden Millrose track, the Irishman won the mile here an astonishing seven times, a feat surpassed only by Bernard Lagat, who won his eighth Wanamaker Mile in 2010.[2]

Some of the most memorable moments in Millrose history include Ray Conger’s 1929 upset win over Nurmi in the Wanamaker Mile; pole vaulter Cornelius Warmerdam becoming the first person to vault 15 feet (4.6 m) indoors, in 1942; John Thomas hitting the first 7-foot (2.1 m) high jump, in 1959; Mary Decker’s thrilling run to a 1500-meter World Indoor Record to ear-splitting encouragement from the crowd, in 1962: John Ulysses becoming the first person to pole vault the height of 16 feet, Carl Lewis in 1984 shattering the World Indoor Record with a jump of 28 feet (8.5 m), 10.25 inches, a mark that still stands; Eamonn Coghlan notching his then record seventh Wanamaker Mile in 1987, Bernard Legat breaking Coghlan's record with his eighth Wanamaker Mile triumph in 2010, and Stacy Dragila setting a late-night pole vault world record in 2001.

For 70 of its first 96 years, the role of Millrose meet director was a father-son affair: Fred Schmertz took the helm in 1934, handing the reins to son Howard in 1975. In 2003, the title of Meet Director Emeritus was bestowed on the younger Schmertz.

In May 2011 Norbert Sanders, the President of the Millrose Games, announced that, starting January 2012, the games would be moved to the Armory in Washington Heights, at 168th Street, and that a new all day Saturday schedule would replace the Friday evening format[3].

202 athletes share the distinction of being both Millrose Games and Olympic champions.